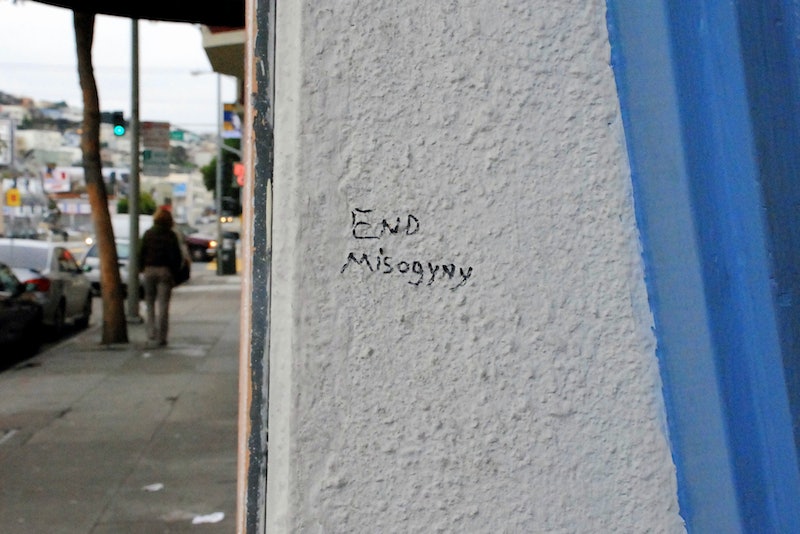 "Can I be misogynistic when I'm a woman?" a friend asked when I pointed out that her view of girls as "fussy" contained hints of misogyny. "Yes," I answered — we all can. There are so many ways that internalized misogyny shows up in our lives that it's difficult not to be.

Internalized misogyny does not refer outright to a belief in the inferiority of women. It refers to the byproducts of this societal view that cause women to shame, doubt, and undervalue themselves and others of their gender. It shows up even in the most feminist and socially conscious of us. And it's insidious.

If internalized misogyny were an intentional plan of patriarchy — which it isn't; it's just an automatic effect of it — it would be a brilliant one. It allows women to perpetuate the oppression imposed on them for centuries without any effort on anyone's part.

If you notice signs that you have internalized the sexism directed toward you, don't be hard on yourself. How could you not? It's in the air we breath. Still, it's helpful to be aware. Awareness of any form of sexism lets us question it rather than take its toxic messages at face value. So, here are some phenomena in your everyday life that might very well reflect internalized misogyny.

1. Taking More Pride In Your "Feminine" Qualities Than In Other Ones

Don't get me wrong: We should all feel free to take pride in any of our qualities regardless of our gender. But sometimes, women value their "feminine" qualities more than their "masculine" ones or strive toward "feminine" qualities at the expense of their well being. For example, being small is considered feminine. When we take pride in ourselves for being skinny because we're conforming to the ideal of women as unimposing and ascetic and conventionally "beautiful," not because that's how our body just is, we are perpetuating a standard of beauty that harms us.

2. Taking More Pride In Your "Masculine" Qualities Than In Other Ones

Though we are encouraged to attain some "feminine" qualities, like smallness, we are discouraged from cultivating others, like the propensity to cry. We are supposed to be sensitive, but not too sensitive; otherwise, we are called irrational. So sometimes, when we act "masculine" by resisting emotion, we feel like that is superior to expressing ourselves. But that very idea is based in misogyny. If tears were associated with men, they'd probably be considered a sign of bravery. If you find yourself wanting to act "masculine" for reasons other than just being yourself, it is very understandable, but also may have misogynistic roots.

3. Looking Down On Other Women

When we consider ourselves a rare exception to our gender for being easygoing or strong or more focused on inner qualities than appearance, we insult all women and therefore ourselves. This also applies when we compliment other women, as my friend did in the example I started with by commending one supposedly rare woman for not being "fussy." As long as we view ourselves or a select few women as the exception, we will not change the rule.

4. The Phenomenon of the "Cool Girl"

As the protagonist in Gone Girl describes in the video above, the "cool girl" is "hot and understanding. Cool Girls never get angry; they only smile in a chagrined, loving manner and let their men do whatever they want. Go ahead, shit on me, I don’t mind, I’m the Cool Girl." The upside is that the Cool Girl fits in with men; the downside is that she can lose herself in the process. If you've found yourself trying to be "one of the guys" or ignoring what you wanted to make a man (or anyone else) happy, patriarchy may be at work.

The other day, I had to sneeze during a conversation with a friend — and I felt so guilty for "interrupting" her with my sneeze. If only people felt as guilty about interrupting women as we do about interrupting others! The more I learn that guilt is a gendered phenomenon, the more I notice the ridiculous things women feel guilty about: eating, saying "no," asking for what they want in bed — the list goes on. If we try to conform to our gender's prescribed role, it's impossible not to feel guilty because there are so many things we have to be that we just can't. Nobody deserves to essentially feel bad about existing.

I'm still learning not to slut-shame myself and other women. I used to think I could reject the extreme of slut-shaming, like telling a woman it's her fault she was raped, but still think my friend's decision to sleep with a guy on a first date sort of maybe reflected low standards. I didn't understand the roots of this belief until I caught myself having the thought, "If you sext with a stranger, that means you're desperate." "Desperate" and "low standards" are just coded phrases we use to describe women who are "too sexual." It is considered normal for men to do all sorts of things — watch porn, request nude photos, have casual sex, and yes, sext with strangers — and we assume their motive is horniness, not self-disrespect. Yet women feel bad about these things. There's that guilt again.

I have to check myself on this a lot. When I see a woman being a stay-at-home mom, wearing a lot of makeup, or doing other things women are often pressured into, I have to curb the impulse to assume they're trying to conform. Though it stems from the very real fact that women are often pressured to conform in these ways, this impulse still categorizes behaviors as masculine or feminine rather than viewing them as individual choices dissociated from gender. It also devalues femininity, and that hasn't gotten us anywhere. Instead of discouraging women from being feminine, we should view both femininity and masculinity as available to anyone. As long as we devalue the role of the stay-at-home parent, for example, there will be a stigma against men who assume it. Even if sexism is removed, it's just statistically unlikely that no woman will ever want to do anything feminine. Women have choices, and the choices they make deserve respect — no matter what they are or whether we agree with them.