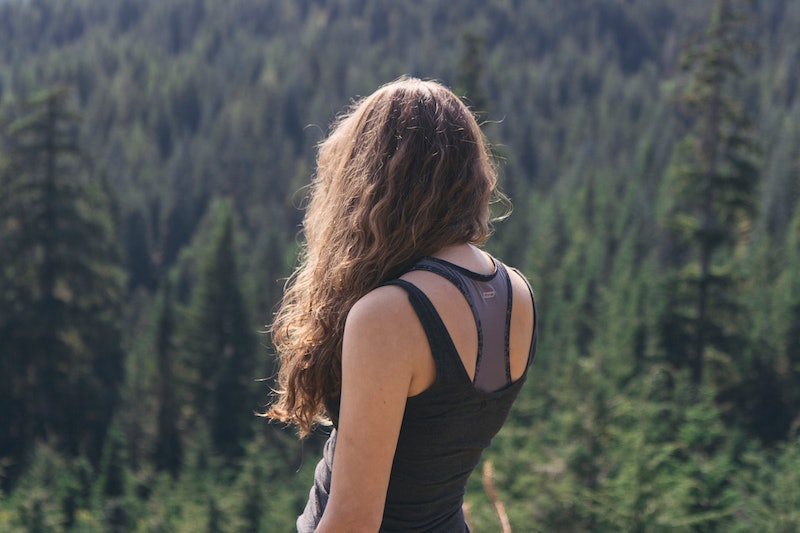 The subtle, sneaky ways society slut-shames women are awful — and the societal standards that urge us to shame and blame other women about their bodies and sexuality are terrible. But the ways we slut-shame ourselves — even though we know we've done nothing to be ashamed of — may be even worse. Because here's the thing: I don't actually feel like there's anything wrong with my lifestyle, wardrobe, use of language, porn habits, sex habits, or anything else relating to my sexuality (or anyone else's, for that matter). But more often than I like to admit, I end up shaming myself about these things, even though I know better. And you probably do the same. Even when you don't consciously agree with them at all, society's ideas about how women should act have a way of sneaking into your brain and making you feel guilty and bad about yourself.

If you've ever been slut-shamed, then you know how awful it feels to be chastised for not living up to society's arbitrary mandates about how women should conduct themselves when it comes to sex. But while being slut-shamed by others is horrible, slut-shaming yourself can be even more damaging — it can make you feel guilty, it can lead you to second-guess your own desires and choices, and it might even lead you to believe that others are right to criticize your sexuality. And you should never have to feel that way.

So let's all vow to become more aware of the ways in which we slut-shame ourselves, and try to fight it. To that end, here are five ways you might be doing this — and why you definitely shouldn't.

Most of us like to feel sexy sometimes. And some of us like to wear revealing clothes sometimes — maybe to feel sexy, or maybe just because we think it looks good. Personally, I love wearing crop tops, short shorts, bikinis, tight skirts, and all manner of revealing clothing. But sometimes, I find myself feeling inexplicably guilty for showing skin, or loving all things body-con. If you do too, I have some bad news: We've been slut-shaming ourselves.

Here's the good news, though: We can put an end to this nonsense now. There is nothing shameful about our beautiful bodies or the way we adorn them. We have to stop shaming ourselves for doing something as harmless as dressing ourselves in a way that gives us pleasure.

Most women know they don't have to reserve sex for relationships or love. We know sex is just a human need, and we should feel no shame in fulfilling that need however we see fit. Period.

What's bizarre is how, despite the fact that we know this, some of us still slut-shame ourselves for having casual sex and/or one-night stands. This reaction makes literally no sense, because it's not coming from how we really feel or what our morals really tell us. Rather, it's coming from societal ideas we've absorbed about how women are "supposed" to feel about sex. So let's just quit it. We're not required to feel anything that we don't want to feel, and we certainly shouldn't have to feel guilty for not hating sex.

Women are often slut-shamed for enthusiastically agreeing to have sex when someone asks us to — and we're slut-shamed when we ask for sex ourselves, too. So we're just never supposed to want to have sex at all? That's an impossible standard, and a dumb one. I have been (and will probably continue to be) the instigator in most of my sexual experiences. And honestly, I feel like I should be proud of the fact that I've been able to ask for what I wanted, instead of waiting to be asked.

However, I would be lying if I said I've never slut-shamed myself for this, because I have. If you have as well, just know that we're both being ridiculous. I mean, it is understandable to feel complex feelings about "making the first move" when society tells us from girlhood that we're not supposed to — but your goal can be trying to understand that making the first move is a fine thing to do, rather than trying to repress your urge to be forward. And know that having the confidence to be clear about what you want is nothing to be ashamed of. It's actually pretty cool.

5. Speaking Openly About Sex And Sexuality

Sex and sexuality are some of the most fun, natural things about being human. But we all know that talking about them openly is still often considered classless if you're a lady. Personally, I love talking about sex, writing about sex, and listening to what other people have to say about sex. But I feel like women are still conditioned to slut-shame themselves for working sex and sexuality into their everyday conversations — and there is simply no reason for this. Because we own our sex lives, and being sex positive is way more fun than shaming ourselves for not being "ladylike" enough is. Plus, sex is just one of the most enjoyable topics of conversation out there. So don't be ashamed to sex-talk it up. Hey, it's more interesting than talking about golf!