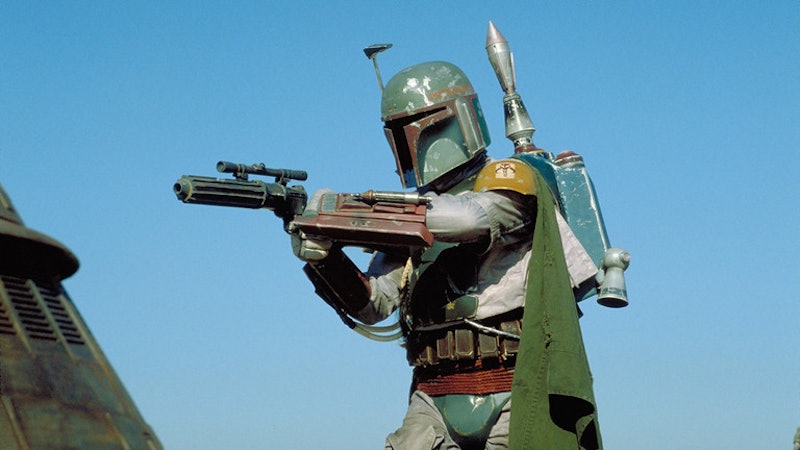 All right, everyone, you can get off the edge of your seat now, because the movie we've all been primed for is finally out. We'll finally get an answer to all of our questions, namely: is Boba Fett in Star Wars: The Force Awakens ? Maybe you have things you're jonesing a little harder to find out about, but Boba Fett was such a great villain that I, personally, would be psyched to see him come back. The bounty hunter first appeared in Episode V: The Empire Strikes Back, being introduced as Darth Vader's second-in-command, the villain that Vader just barely beat out of the Most Evil superlative. He's also showed up in three of the Star Wars movies so far — The Empire Strikes Back, Return of the Jedi, and Attack of the Clones, as well as being digitally remastered into A New Hope, standing outside the Millennium Falcon with Jabba the Hutt. I think you can understand why I'd want him to make a reappearance in The Force Awakens, but does he?

Sadly, the answer is no, which is really no surprise when you think about it, because, hello, he died in that Sarlacc pit. I know there were people convinced that he'd survived a fall directly into the Sarlacc's mouth in Episode VI: Return of the Jedi, but it seems he did not, and his death is permanent. Which is a plus for the good guys, because Boba Fett has always proven himself to be a big obstacle for, y'know, good things happening, but also a real bummer for us, because Fett had such an amazing character arc. In Episode V, he's the one who pursues the Millennium Falcon to Cloud City, allowing Vader to capture everyone aboard and torture Han Solo. And, when Vader finishes with Solo, and Fett insists on claiming his reward for his capture, the carbonite-frozen Solo gets handed over to Boba Fett so he can basically do whatever he wants with him.

Which is apparently allow him to be unfrozen by Princess Leia, and then rescued by Leia, Luke Skywalker, Lando Calrissian, Chewbacca, and the droids in Episode V, and then get spirited away to get captured again in Episode VI, at Jabba's palace. Boba Fett isn't great at holding onto his quarry, but boy is he super at tracking them down. They go to escape yet again at the Sarlacc pit where their execution is set to take place, and it should surprise you not at all — both because you've seen the movie, and because this is totally Fett's M.O. — that he whiffs it and himself dies at their planned execution.

So yeah, it's been quite the roller coaster for Boba Fett over the years, and I think his character arc did him justice, so I'm glad he wasn't brought back in some way for The Force Awakens. He got what was coming to him in Return of the Jedi, so it'll be up to someone else in Episode VII to be a total dingus at holding onto prisoners.

More like this
Oops! The 'Stranger Things' Monopoly Game Has Spoilers For Season 4
By Alyssa Lapid
Everything To Know About Marvel’s 'Thor: Love And Thunder'
By Grace Wehniainen
The 'Hocus Pocus' Sequel Finally Has A Release Date & It Makes Total Sense
By Shannon Barbour and Radhika Menon
What Does Doctor Strange’s Third Eye Mean?
By Arya Roshanian
Get Even More From Bustle — Sign Up For The Newsletter