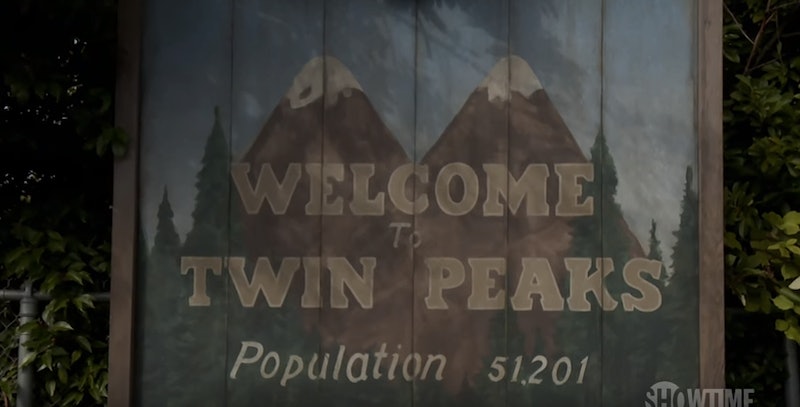 David Lynch fans rejoice, because first teaser trailer for Twin Peaks is here, released without ceremony on Dec. 18, and it is spooky right out of the gate. It's less than a minute long, but somehow they've already completely nailed the eerie ambience of the first series, which aired for two seasons back in 1990 and 1991. The video reveals very little — if anything — as to what we should expect from the show, yet somehow I was already in head-to-toe goosebumps just a few moments into it.

We start by flying over a foggy, mysterious landscape, as a voiceover tells us how the location can almost be a character in and of itself. Normally I might scoff at a statement like that, but you really feel it. It's hard to express without watching it yourself, but somehow the little clip speaks volumes about the tone and direction of the show, without actually revealing anything. Which makes sense: the show won't come to Showtime until 2017, over a year from now, as it was pushed back from an original date of 2016. Creators David Lynch and Mark Frost are both returning, having co-written all nine of the original episodes, although the limited series order is now said to have been expanded to 18.

In any case, the story is intended not to be a reboot or a reimagining, but rather a continuation of the original series, and you definitely get that vibe from the teaser. Especially at the very end, when the image cuts from a slow motion zoom into the population sign for the city of Twin Peaks, then suuuuuper creepily cuts away to a blurred out image of what looks like a man in a suit, reaching for the camera as unidentifiable (but supremely unnerving!) sounds filter in through the background. Watch the teaser yourself, below, and I dare you not to jump, even when you know it's coming.

Blegh! All my hairs are standing on end, and in the best possible way. I can't wait to see what this talented team has gotten up to so far, so I hope the next nugget of information that they drop about this project isn't too far in the future.