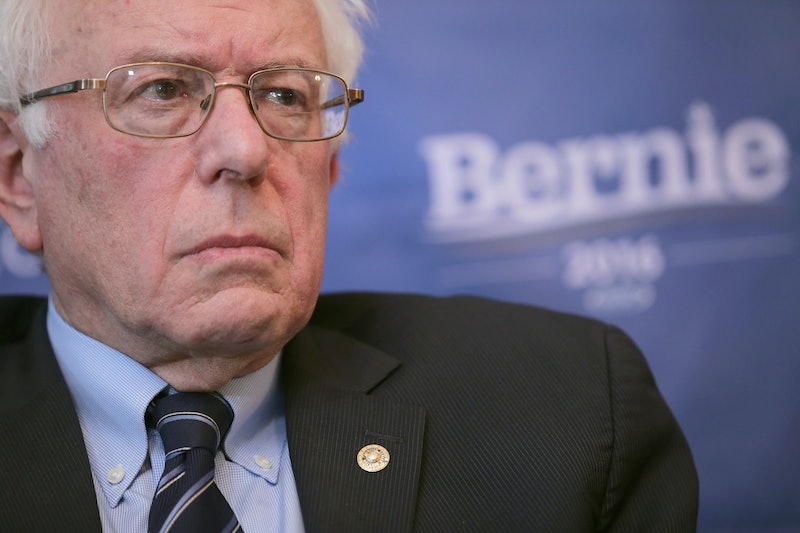 On Friday afternoon, in a press conference in Washington, D.C., Bernie Sanders' campaign accused the Democratic National Committee (DNC) of intentionally sabotaging the Sanders 2016 campaign. The DNC, on the other hand, maintains that a Sanders campaign staffer took advantage of a software error to look at Hillary Clinton's voter data in the DNC database. Sanders' campaign manager, Jeff Weaver, said he's willing to take the DNC to court if the campaign isn't allowed to access its own voter data soon. "The DNC, in an inappropriate overreaction, has denied us access to our own data," Weaver said at the press conference. "In other words, the leadership of the Democratic National Committee is actively trying to undermine our campaign... If they hold our data hostage, we will be in federal court this afternoon seeking immediate relief." According to Weaver, the data is vital to a grassroots campaign like Sanders'.

Just before Weaver voiced his lawsuit threat, DNC Chairwoman Debbie Wasserman Schultz sent a message to the group's members, saying: "Over the course of approximately 45 minutes, staffers of the Bernie Sanders campaign inappropriately accessed voter targeting data belonging to the Hillary Clinton campaign." Schultz' message said the Sanders' campaign would remain locked out of the database until the DNC had a full account of whether or not the information was used.

Sanders' campaign confirmed that a staff member accessed another campaign's voter data, and communications director Michael Briggs said in a statement: "That behavior is unacceptable, and that staffer was immediately fired." Josh Uretsky, Sanders' national data director, was also fired, according to CNN. The campaign, however, blames the DNC and the database's vendor, NGP-VAN. In a press release on the campaign website, Weaver said:

Two months ago, shortly after our digital vendor who conducts modeling for our campaign told us that there was failure in the firewall that prevents campaigns from seeing one another's data, we contacted the DNC and told them about the failure. We were concerned that our data could be compromised and we were assured at the time the firewall would be restored.

Instead, we found out two days ago that once again, this sensitive and important data was compromised because the DNC and its vendor failed to protect it.

NGP-VAN released a statement Friday confirming that the DNC ordered it to suspend the Sanders' campaign's access to the database and the company said the problem will be investigated. "We are confident at this point that no campaigns have access to or have retained any voter file data of any other clients; with one possible exception, one of the presidential campaigns," NGP-VAN said in the statement. "Our team removed access to the affected data, and determined that only one campaign took actions that could possibly have led to it retaining data to which it should not have had access."

The Clinton campaign has yet to comment on the incident.