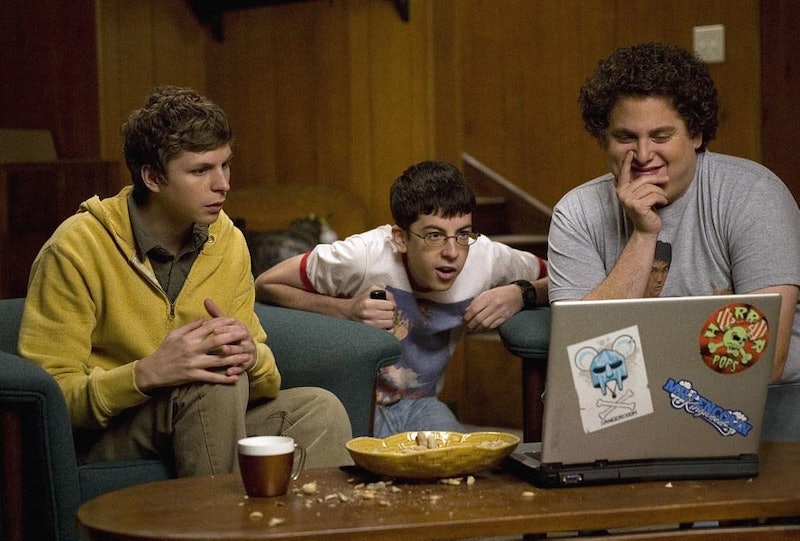 Thanks to American retailers, it may seem like everyone celebrates Christmas, but that's actually not the case (gasp!). And television networks are acknowledging this fact with what's on TV on Christmas 2015. While there are many holiday-themed movies that will be airing on television on Dec. 25, there will also be plenty of movies and (some) TV shows that don't deal with the holiday at all.

Some networks understandably can't help themselves with Christmas programming and will be airing specials Christmas evening with CMA Country Christmas on ABC, The Andy Griffith Christmas Special on CBS, and The iHeart Radio Jingle Ball 2015 on The CW. And for those who like their guilty pleasures, Lifetime will spend all day showing their own brand of Christmas films. But don't fret if you prefer to spend Christmas day on the couch with non-yuletide fare because you don't need to turn off the TV to escape Christmas — good ole standard programming has got you covered.

So for those who either don't celebrate Christmas or for those who've already overdosed on holiday cheer, here are 19 movies and shows you can turn to in your time of need, according to TV Guide's schedule, listed in EST.

1. The Twilight Zone On Syfy

Get ready for Syfy's annual New Year's Day marathon of The Twilight Zone by getting a head start with an episode early Christmas morning at 5:30 a.m.

2. The Sisterhood of the Traveling Pants on MTV

Christmastime typically has a big focus on families, but what if your friends are your family? Then The Sisterhood of the Traveling Pants is there for you on MTV from 6 to 8:30 a.m.

ABC, CBS, and NBC will all be airing new episodes of their live morning shows (Good Morning America, CBS This Morning, and Today, respectively) starting at 7 a.m.

AMC loves to spend Christmas with John Wayne and this year's two-day Waynefest begins at 9 a.m. with Rooster Cogburn and includes the movies The Cowboys and Rio Bravo.

5. The Other Guys On FXX

Will Ferrell and Mark Wahlberg have teamed up again for Daddy's Home, which hits theaters on Christmas Day. But if you don't feel like going outside, watch their first hilarious collaboration, The Other Guys, on FXX from 10:30 a.m to 1 p.m.

All the warm and fuzzy getting you down? Turn to David Bowie in the creeptastic Labyrinth on Syfy. The '80s film airs at 1 p.m. and then again at 3 p.m.

Materialism often takes over the Christmas spirit and no one knows about shopping like Cher Horowitz from Clueless, which will be on MTV at 1:20 p.m.

Football may own Thanksgiving, but Christmas belongs to basketball. ABC will be airing the Chicago Bulls against the Oklahoma City Thunder at 2:30 p.m. and the Cleveland Cavaliers against the Golden State Warriors at 5 p.m.

Not only will Comedy Central be showing Jeff Dunham's Very Special Christmas, the station will be devoting a chunk of time to the non-Christmas-related stand-up comedy of Gabriel Iglesias with Hot and Fluffy at 12:34 p.m, Aloha Fluffy at 1:39 p.m, and I'm Not Fat ... I'm Fluffy at 3:14 p.m.

Christmas is on a Friday this year, so celebrate the day off from work with Horrible Bosses at 3:30 p.m. on FXX.

If you've had it with family, you can catch Jennifer Lopez and Jane Fonda in Monster-in-Law at 4 p.m. and then again at 6:30 p.m. to be reminded that your family dynamic could be a whole lot worse.

Nobody puts baby in a corner, especially on Christmas. Enjoy this classic dance flick at 4:30 p.m. and later at 9 p.m. on Pop.

After the day-long marathon of A Christmas Story, TNT will move onto the feel-good Sandra Bullock film at 7 p.m.

Instead of A Madea Christmas, BET will be showing the Tyler Perry-led Madea's Family Reunion (which is also pretty appropriate for Christmas night) at 7:12 p.m. on BET.

16. Harry Potter and the Sorcerer's Stone On ABC Family

If you're upset you didn't get an invisibility cloak this Christmas, hate-watch Harry receiving one in the first Harry Potter film at 7:15 p.m. on ABC Family. (Me? I'd prefer a Weasley Christmas sweater.)

By 8 pm, you may have had one too many to drink, so join Carol Burnett's drunk Miss Hannigan in Annie on TCM.

Superbad is perhaps the movie that least comes to mind when I think of Christmas, but that won't stop Bravo from airing it (or me from watching it) at 9 p.m.

There will be a brand new episode of 20/20 on Christmas night at 10 p.m. So however you spend your Dec. 25, you can end it with some investigative journalism ... or Superbad. I'd say they are both safely in the spirit of Christmas.