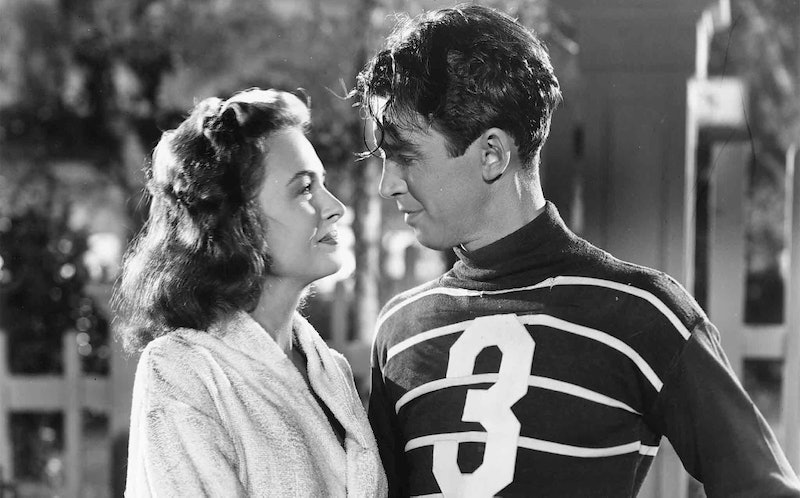 Your best bet for getting the film instantly is to stream the movie in HD from Amazon for $4.99. YouTube has It's a Wonderful Life, but it will cost you upwards of $9.99, and like George Bailey, you probably aren't made of money. And along with YouTube, iTunes and Google Play have the film also starting at $9.99. Yet, the pro to all of these options is that you will be buying the film to own, not rent, so you'll never have to depend on the whims of the streaming universe again.

While owning DVDs is a dying practice, it will be the film's 70th anniversary next year, so there will also probably be an insane amount of special editions out there. Yet, not matter how the movie is distributed, George Bailey's appeal endures. George's story mostly focuses on his hesitant devotion to the community of Bedford Falls and his father's Building and Loan, but those aren't the only reasons I will love George Bailey 'til the day I die. So no matter how you watch It's a Wonderful Life for the 2015 Christmas season, let's reflect on the ways George Bailey has won audience's hearts over and over again throughout the years.

I really don't understand why "hot dog" isn't used more as an interjection nowadays, but though George never got his million dollars, his wishful thinking made him endearing right off the bat. (That and the fact that he continued to wish on the cigar lighter as an adult.)

Young George Bailey saved his younger brother Harry from drowning, but he also saved his employer Mr. Gower from accidentally poisoning someone. George was not only brave to tell Mr. Gower the truth, but he showed his vulnerable side as he sobbed with the druggist.

3. The Way He Treats His Mom

Both the Bailey boys are good kids and George's banter with his mother makes him be the kind of guy you'd want to bring home to your mother. Unless, of course, your mother is Mrs. Hatch — Mary's mom.

4. When He Thinks He's Got The Moves

At his brother's graduation party, he thinks everyone is paying attention to him and Mary dancing because they are so good, but really it is because they are about to fall in the gym pool. Sorry, Jimmy. You're too gawky to really master the Charleston, but I love you anyway.

5. When He Says He's Going To Lasso The Moon

One of the most iconic scenes for the romance lovers out there is when Mary and George walk back from the dance while singing "Buffalo Gals" and he promises to lasso the moon down for her. Yes, I'm mad at what a jerk George is when Mary brings up the moon-lassoing years later, but like I said earlier, he's not perfect. And he's just realizing that because he loves Mary, his future will be completely different than he has imagined.

6. His Surprised Face In The Honeymoon Scene

Could Jimmy Stewart be anymore adorable in the moment when he discovers that Mary, Bert, and Ernie have created a mini-Honeymoon after the newlyweds gave their money away during a bank run? The moment is even better since it look place in the "drafty old house" that Mary had thrown a rock at and wished upon during their romantic walk years earlier.

George expresses hysterical excitement when he discovers that he's back in the life he has always known and not in the world where he never existed that his angel Clarence showed him. Some people may prefer, "Zuzu's petals!" but I'm going with "My mouth's bleeding, Bert! My mouth's bleeding!" as my favorite line from this scene.

8. When He's Running Through The Streets of Bedford Falls

The most joyful, feel-good Christmas moment of the film comes from when George realizes how blessed he has been and runs to his home through Bedford Falls. Anyone who isn't moved by Stewart's display of pure Christmas bliss (and the singing of "Auld Lang Syne" that follows) is the ultimate Mr. Potter. And that's OK, because it just means more George Bailey for me. Now excuse me while I go stream It's a Wonderful Life and cry a puddle of perfect Christmas joy.