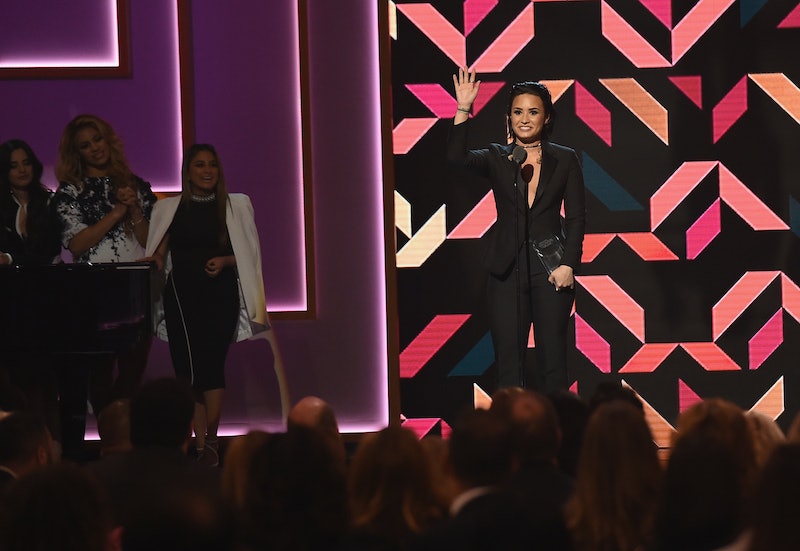 This year, for the first time in its ten-year history, Billboard Women In Music was broadcast on television. Lifetime aired the ceremony on Friday night, giving a newly wide audience access to the glitzy distribution of awards with titles like Chart-Topper, Innovator, and Rising Star. Pop queen Demi Lovato was on hand to accept Billboard's Rulebreaker award from Girl Group winners and former X Factor contestants Fifth Harmony. Rulebreaker isn't a category that Women In Music copied from the Grammys or the American Music Awards, but it's clearly an honor that delighted the outspoken singer, who asks me regularly on my gym mix, "What's wrong with being confident?" There aren't enough awards for breaking rules, frankly, especially for women in the industry. Swap the word "rules" for "expectations" or "stereotypes" and you can see why Demi Lovato more than deserves the accolade.

Billboard Women In Music differs from other award shows in more than just its nontraditional categories. No nominees were presented; no envelopes were opened. Instead, honorees like Lovato were introduced by presenters and then treated to a video package condensing their 2015 highlights into a few whirlwind minutes. Lovato's introductory video included glowing words of support from friend, frequent collaborator, and 2016 tourmate Nick Jonas. "Demi has an ability to break down barriers," Jonas said. He praised her ability to "connect her life to her music" in a way that inspires her fans to open up themselves. "The way to be a role model is to be honest about the state that you're in," he added.

Lovato took the stage in a fitted black pant suit to perform her anguished power ballad "Stone Cold." While attendees were still drying their eyes and processing the raw emotion of the songwriting and her voice, the artist gave a characteristically honest and witty acceptance speech. She even called out a grade school bully. Better late than never, though it sounds like she handled him perfectly at the time.

I thought it was so awesome because for the first time in my life, and in my career, I felt like I've grown to know who I am as a person and an artist. So being a rulebreaker, it's not intentional and that's what's awesome about it. When you're yourself, people see it...When I was in the first grade, this boy named Antonio Wallace, he came up to me and he said 'girls suck!' and I was all hyped up on Spice World and stuff, so I punched him in the face and I said 'girl power!' Needless to say, kinda always been a rulebreaker, even since the first grade.

The nature of the honor is inclusive of Lovato's advocacy in addition to her art. Her candid discussion of her struggles with mental illness have helped to relieve some of the stigma surrounding the topic. In her acceptance speech, she acknowledged the tough love from her manager Phil McIntyre that she credits for "saving [her] life."

A lot of managers enable their artists when they're going through stuff, but he's the first person in my life that said, "I will not be your manager unless you get help for your issues."

Demi Lovato's win at Billboard Women In Music proves that rulebreakers don't always make it there on their own but they do require a strong sense of self (and "Confidence") to succeed in blazing a trail.

More like this
Stormi Just Walked A Red Carpet With Mommy Kylie Jenner & Daddy Travis Scott
By Hugh McIntyre
Is Megan Fox Pregnant? MGK Gave A Shout-Out To Their “Unborn Child” Onstage
By Hugh McIntyre
Spice Girls’ Net Worth: The Richest Member Is Wealthier Than The Rest Combined
By Hugh McIntyre
Doja Cat Wore Surrealist-Inspired Schiaparelli To The BBMAs
By Dominique Norman
Get Even More From Bustle — Sign Up For The Newsletter