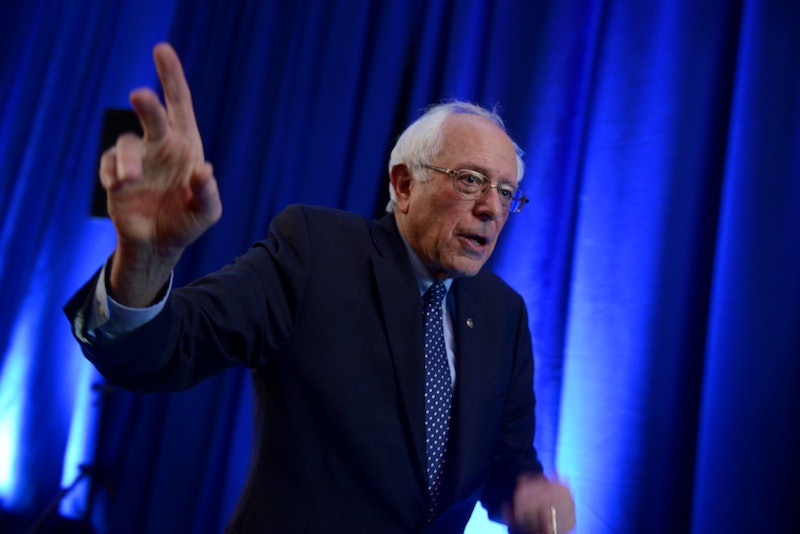 The third Democratic debate has wrapped up, and as expected, it was a much classier affair than any of the Republican debates. This was the last debate of the year, and thus the last chance for the candidates to make their pitch to voters before everybody heads home for the holidays. While Bernie Sanders’ closing statement at the debate focused on the general economic arguments on which he’s based his campaign, he also went out of his way to bash the Republican candidates. Here's what he said:

Thank you very much for hosting this debate, and let me applaud my colleagues up here, because I think frankly, maybe I'm wrong, but on our worst day I think we have a lot more to offer the American people than the right wing extremists... [Applause]

My father came to this country from Poland at the age of 17 without a nickel in his pocket, which sparked my interest in the need for immigration reform, because I know what it's like to be the son of an immigrant. We grew up in a three and a half room, rent-controlled apartment in Brooklyn, New York. My mother's dream, and she died very young, but my mother's dream for her whole life was to be able to get out of that rent-controlled apartment and own a home of her own. She never lived to see that.

But what my parents did accomplish is they were able to send both of their sons to college. We were the first in the family. So I know something about economic anxiety, and living in a family that does not have sufficient income. And that is why I am pledged, if elected president to the United States, to bring about a political revolution where millions of people begin to stand up and finally say, 'Enough is enough. This great country and our government belong to all of us, not just a handful of billionaires.' Thank you very much.

Sanders has received some criticism for focusing his campaign entirely on the topic of income inequality. That’s a worthy issue, of course, but for much of Sanders campaign, it seemed like that was all he talked about. He's caught some flack for this, most notably during the second Democratic debate when, he pivoted to wealth inequality while answering questions about national security.

Lately, though, the Vermont senator has branched out a bit. He criticized Donald Trump’s absurd proposal to ban Muslims from entering the United States, calling it divisive and demagogic, and argued passionately against sending U.S. ground troops to fight ISIS in Syria during the fifth Republican debate. At the third Democratic debate, Sanders continued to broaden his horizons; his opening statement, for example, focused just as much on national security than it did wealth inequality.

But by the time the debate was over, Sanders had come full-circle. He closed with a message that was focused solely on economic inequality — and equally, he criticized Republicans for exacerbating that inequality.