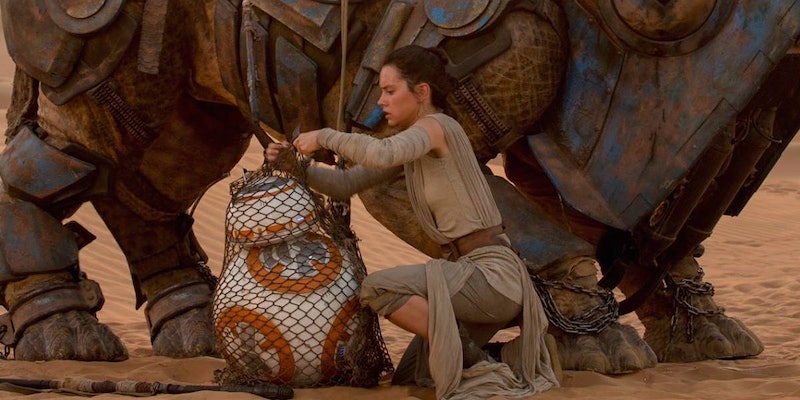 Like many fans across the galaxy, I had been devouring any and all tidbits about Star Wars: The Force Awakens. Due to some super sleuthing, I entered the theater opening day thinking that Rey, along with baddie Kylo Ren, were going to be twin members of the Solo/Skywalker family. I was confident in my prediction, but man — BEWARE: Spoilers for The Force Awakens ahead! — I could not have been more wrong. While, as expected, Kylo Ren was born Ben Solo, Rey's lineage was left totally unexplained. As the credits rolled, I couldn't help but wonder, "Who is Rey?" She is clearly important. Her ability to use the Force with very little training, her costuming, and her origin story all seemed so familiar. Then, a major theory hit me: Luke Skywalker must be Rey's father. He has to be!

The Star Wars saga has always been about destiny, fate, and the idea of choice, intertwined with the family drama of the Skywalkers. It would make sense that the new trilogy's lead character would be a member of the family. And that final battle between Rey and Kylo Ren? That only could have been a fight between family members ... like, say, cousins?

Of course, the movie neither confirmed nor denied Rey's parentage, but I'm pretty positive that Luke's gotta be in there. In fact, looking back, I'm confident that there are so many clues which confirm that Rey is the daughter of Luke Skywalker.

The easiest comparison between Rey and Luke is the way they look and dress. Both seem to favor white draped shirts and cream-colored pants. Like father, like daughter, I guess!

Luke and Rey have strikingly similar backgrounds. Both grew up as orphans on a desert planet, both crossed paths with a droid, and both began a journey to fulfill their destiny soon afterwards. The fact that Rey grew up on Jakku and Luke grew up on Tatooine doesn't matter — the planets look too similar for this simply to be a coincidence.

It seems unlikely that Lor San Tekka — the man with the key to finding Luke — and (maybe) Luke's daughter were living on the same planet. I believe that Tekka was put on Jakku to keep an eye on Rey, similarly to how Obi-Wan watched over Luke on Tatooine. When the time was right, maybe Tekka was meant to reunite Luke and Rey, using the map he was provided. Since Kylo Ren and the First Order killed Tekka, a different path had to be forged to reunite father and daughter.

In the early scenes of The Force Awakens, Rey is seen scavenging Jakku for spare parts to sell. She rides a speeder bike that looks eerily similar to Luke's land speeder from the original film. In addition to keeping her racer working with salvaged parts, Rey is consistently shown to be a natural-born tinkerer and pilot — traits she shares with (fingers crossed) her father and grandfather.

Han Solo Offers Her A Job

Midway through the film, Han offers Rey a job on the Millennium Falcon. This is so out of character for the lone-wolf Solo. The only other time he's done such a thing was with Luke in A New Hope. Also, Han tells Rey that Chewbacca likes her; another thing that Luke and Rey share.

"It's Calling To You"

The fact that Luke's original blue lightsaber, which is an heirloom of the Skywalker family, calls to Rey seems like a very important clue. The lightsaber knows who its next rightful owner is. Also, both Luke and Rey pulling the lightsaber out of the snow when they are in dicey situations seems like a hint.

After being called to the lightsaber by some unseen force, Rey touches it and is transported through a series of visions similar to those that Luke experienced in the cave on Dagobah in The Empire Strikes Back. Rey has visions both of her own path and Luke's. It would safe to assume that means the two are connected.

When Rey steps off the Millennium Falcon and meets Leia, the two characters hug. Yes, they were both mourning (spoiler alert) Han, but the way Leia hugs Rey has such a level of familiarity. It's like how she hugs Luke.

R2-D2 has been on sleep mode for all these years. Then suddenly Rey shows up, and he's ready to party? Just like when Luke's around ... yet another similarity.

It would appear that "Rey, I am your Father" is the thing I am most looking forward to in Episode VIII.

Join us for the first episode of The Chat Room, where we discuss what it's like to be a woman with an opinion on the Internet, and, of course, Star Wars: