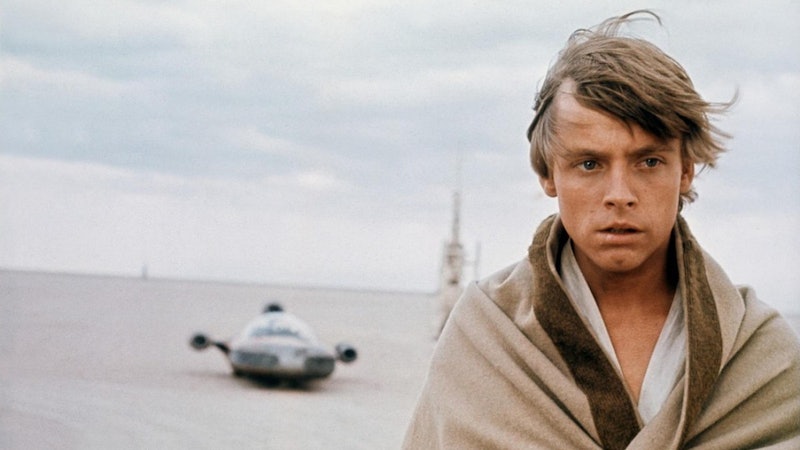 If you've seen Star Wars: The Force Awakens by now, then you've probably been ruminating over unanswered questions since you left the theater. One of these questions very well might revolve around Rey (spoiler alert!) and the ongoing debate on who Rey's parents are! Some are theorizing that Rey is the daughter of Luke Skywalker and one unidentified woman, but that doesn't really help assuage your curiosity so much as it begs for more follow up questions. Like... if this theory is true, who is this unidentified woman? Has Luke had other romantic connections in the galaxy that we're unaware of? We know that Luke Skywalker hasn't been the luckiest when it comes to love (see: Briefly falling for his twin sister) — but what about in the Star Wars expanded universe? Does Luke Skywalker have a love interest in the Star Wars books, perhaps?

Well, turns out: Yep. It turns out, in the books, Skywalker actually has some game. Like, a lot of game. In fact, he finds love — or at least, mutual attraction — with some galactic babes. But, who exactly were Luke Skywalker's love interests in the Star Wars books?

It's a question worth pondering, especially as it's possible that one of these ladies could come up in the next film installment — and it's even more possible that they could be Rey's mother, if the theory about him being Rey's dad is true. Sure, the Star Wars films don't follow the precise narrative of the books by any means, but you never know — crazier things have happened.

Take a look at some of Luke's past romances, and speculate for yourself:

Luke met Akanah Norand in the Black Fleet Crisis by Michael P. Kube-McDowell. They become romantically involved, but their love connection deteriorated when Luke found out Akanah had been lying about knowing his mother (Luke's mother was a Fallanassi, like Akanah).

2. Callista Ming: Children of the Jedi

As a Jedi of the Old Republic, Callista Ming died after Order 66, but was able to project herself posthumously onto a ship's computer. Luke meets her 30 years after Order 66 in the novel by Barbara Hambly, Children of the Jedi. Despite her lack of a corporeal presence, the two fall in love. Later, when Luke's Jedi Student Cray Mingla wishes to die, Callista takes over Cray's body. However, because of this, Callista cannot touch the Force's light side. Eventually, things don't work out between the two of them. Bummer.

In The Courtship of Princess Leia by Dave Wolverton, Luke is captured by Teneniel Djo, a Force Witch. Later, Teneniel Djo becomes attracted to Luke, but the two never see anything romantic through. Teneniel ends up marrying Isolder, and becomes the Queen Mother of Hapes.

Gaeriel Captison first appears as the senator of Bakura in The Truce at Bakura by Kathy Tyers. Luke meets Gaerial when the Rebel Alliance offers aid to Bakura, and the two become mutually attracted to each other. Unfortunately, Gaeriel never acts on anything because of her religion — which strongly teaches that Jedis disrupt the balance of the universe, and therefore should probably not be pursued as love connections.

Luke Skywalker met Mara Jade in The Thrawn Trilogy by Timothy Zahn, when Mara was on a mission to kill Luke, in order to avenge Palpatine, the Empire. (Obviously, she didn't follow through.) Because Mara and Luke had common enemies, they formed an alliance, and Mara became a Jedi. The two did not officially get together until the novel The Hand of Thrawn Duology (also by Timothy Zahn), where they ended up marrying and having a son together.

If the theory about Luke being Rey's dad is true, Rey's mother could be anyone of these women — or none of them at all. But one thing's for certain: Luke Skywalker's definitely more of a ladies man than I ever thought.