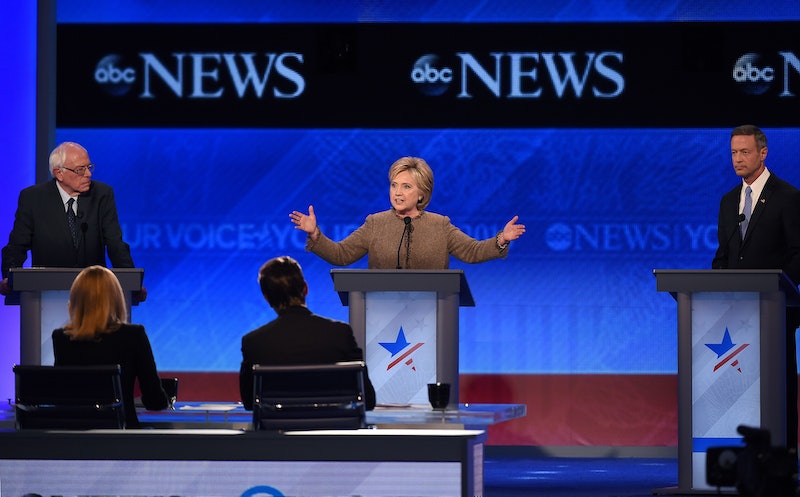 The third and final debate of the year took place on Saturday night and boy was it full of zingers. The event comes just one day after an intense back and forth between Bernie Sanders and the DNC following what appeared to be a data breach within the DNC voter database. Surprisingly, the worst lines from the Democratic debate had little to do with what transpired between a now fired Sanders campaign staffer and the party he is running with. Instead, candidate blunders showcased some lack of knowledge and a series of buzzwords that signified little.

Sanders regained access to the DNC voter database mere hours before he took the debate stage at St. Anselm College in Manchester, New Hampshire. He was joined by Democratic front-runner Hillary Clinton and former Maryland Gov. Martin O'Malley. As with the last Democratic debate, foreign policy took precedent over many other issues, and once again, candidates' knowledge of matters abroad were put to the test. Strategies to combat ISIS as well as how best to mitigate the Syrian refugee crisis were frequently discussed, though for all the incredible insights that the three candidates did provide, there were still plenty of gaffes. Needless to say, the more puzzling and cringe-worthy statements did not go unnoticed.

"I don't know a lot about technology." — Hillary Clinton

The former secretary of state deflected a question about mandating the encryption of websites in an attempt to combat terrorism. She did mention that she didn't necessarily agree with bridging the private and government sectors in this key cyber security matter. Nonetheless, the Democratic front-runner appeared unsure of herself by saying that she doesn't "know a lot about technology."

Martin O'Malley was the mayor of Baltimore when the Sept. 11 attacks took place in 2001. He served as mayor until 2007, when he was elected as the governor of Maryland. Sure, the two positions are impressive and showcase his rise in politics but they do little to illustrate his experience responding to terrorist attacks. The candidate's statements about being "the first post-9/11" in both positions did little but confuse viewers, unfortunately.

All three Democratic candidates refused to shy away from the more divisive statements made by Republican candidates regarding combating ISIS. Clinton even insinuated that the terrorist organization was showing footage of GOP front-runner Donald Trump in their recruitment videos, claiming that he was on his way to helping enlist many new ISIS members. This claim has yet to be confirmed, though ISIS: The State of Terror co-author J.M. Berger and many others have expressed doubts.

"It's because of the flip-flopping, political approach of Washington." — Martin O'Malley

Calling out candidates' viewpoints and voting records into question isn't anything new. The move can be a successful tactic that highlights a presidential hopeful's strong points, while making those onstage look bad. Or they can backfire, as with O'Malley's surprisingly antagonistic answer to a question posed about gun control. When asked about confiscating assault weapons, the former Maryland governor instead turned the question on his fellow candidates. "And it's because of the flip-flopping, political approach of Washington that both of my two colleagues on this stage have represented there for the last forty years," O'Malley said, shortly after both Clinton and Sanders had made amends regarding Datagate. The reactive statement only made O'Malley look less united with his party.

"They should be Muslim troops." — Bernie Sanders

Bernie Sanders' surprisingly insensitive blunder came when he was asked about his stance against sending American troops to combat ISIS. "This is a war for the soul of Islam. The troops on the ground should not be American troops. They should be Muslim troops," Sanders responded. The Vermont senator stated that it simply wasn't the United States' place to have boots on the ground but failed to acknowledge the countless Muslims serving in our military, which puzzled and frustrated many viewers.

"Is it time to change the role of a president's spouse?" — Martha Raddatz

Not a whole lot of positivity was added by moderator Martha Raddatz's question to Clinton about the role of president spouses. Clinton's answer played just as strongly on gender stereotypes, unfortunately. The former first lady stated that she would still "pick the flowers and the china for state dinners." The lowest point of the Democratic debate could've been easily avoided had Raddatz continued her line of questioning on the more meaningful initiatives and far-reaching impact president spouses can make.

"But you know what else they're anxious about?" — Bernie Sanders

As with the previous Democratic debate, Sanders once again sidestepped an incredibly important question in favor of discussing income inequality. Rather than discussing the issue of profiling regarding neighbors noticing suspicious activity at the home of San Bernardino, California, shooting suspects, Sanders instead explicitly stated that he'd like to change the subject. The pivot may have been the candidate's lowest moment in the entire debate.