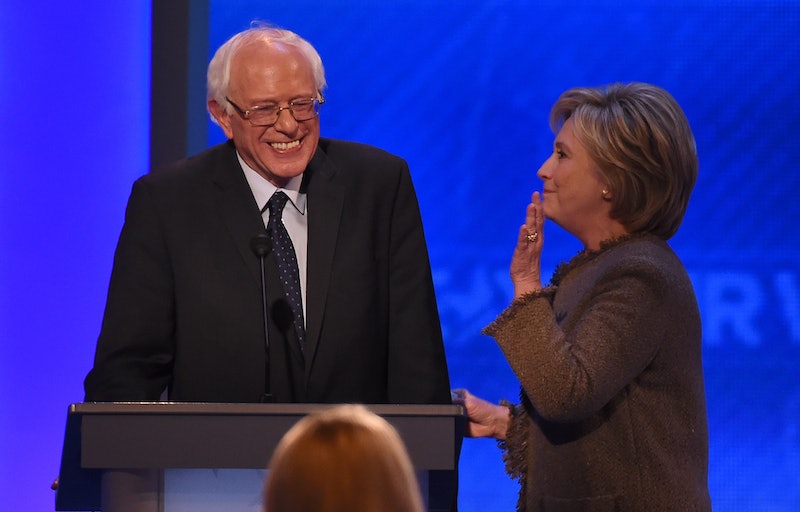 After a quick break at Saturday night's Democratic debate, moderator David Muir started posing a question to Vermont Sen. Bernie Sanders when there was a noticeable absence on stage. Yup, front-runner Hillary Clinton was late getting back on stage, providing one of the oddest moments so far to happen in the primary debates. She quickly said, "sorry," after she returned to her podium, and Muir continued as though nothing had happened, but her tardiness did not escape Twitter's attention.

Just moments after the incident, Twitter users started creating memes and GIFs, and started speculating about why she might have been late. Clinton has, in the past, hinted at the reason: It takes longer for women to use the bathroom, and as one of only two female candidates for president, Clinton is no exception. People took to Twitter to sympathize with Clinton, applauded the moment for being one of the most interesting and amusing of the primary debates, and managed to document the moment in real time. Take a look for yourself:

Twitter had a range of hilarious reactions to Clinton's lateness.

A Line At The Women's Bathroom

Better Things To Do On A Saturday Night

The Other Candidates' Reactions

Roll Out The Memes And GIFs

And, of course, someone had to quote Justin Bieber.

Clinton is lucky. It looks like this won't be her Marco Rubio-water bottle moment.