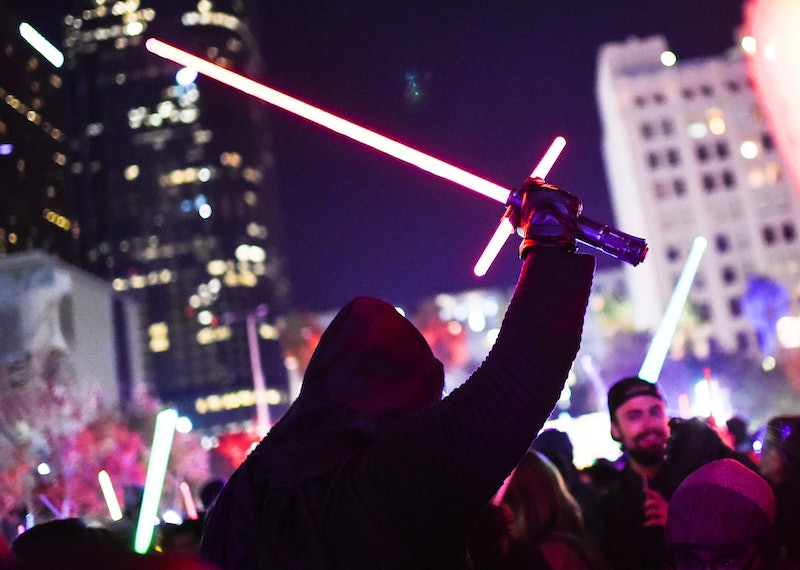 The third Democratic debate certainly had a lot to contend with on Saturday night. The event fell on the weekend before Christmas, and candidates took the stage at St. Anselm College around the same time that the New York Jets took the field to face the Dallas Cowboys in Texas. Candidates were in competition with the cinema as well, as The Force Awakens hit theaters on Thursday night at midnight. Since sci-fi fans and the voting public awesomely overlap, those watching the debate were playing on both with Star Wars Democratic debate memes.

Even the candidates themselves were well aware of the importance of George Lucas' grand space opera as it enters its latest iteration. According to campaign workers for Bernie Sanders in Iowa, due to a temporary ban on Sanders' campaign's ability to access the DNC voter database, supporters thought outside the box and instead went to the movies when seeking to attract more supporters. Canvassers went down the line of fans awaiting their chance to see The Force Awakens across the state while also drawing on pre-saved lists and walk sheets. Star Wars and Democrats go hand-in-hand and these memes prove it even further.

For the many memes floating around social media Saturday night, it appears that no viewer was quite prepared for a Star Wars quote to close out the debate. The timing was simply too perfect for Democratic front-runner Hillary Clinton, who concluded her closing statement with one of the most iconic lines from the entire franchise. "Thank you, goodnight, and may the Force be with you," the former secretary of state said, to the delight of voters across the country. The well-wish not only ended the event on a high note but may imply that Clinton believes she's destined for the White House, following her own path to greatness just like Luke Skywalker himself.

The fact that a presidential hopeful as well as the current president have already touched upon Star Wars may very well mark a bit of foreshadowing for Clinton. If anything, it at least turned the debate into an engaging affair sprinkled with pop culture nerdy goodness rather than an all-out snoozefest like many were predicting. Perhaps the next GOP debate could use a bit of an update à la The Force Awakens as well. I certainly wouldn't object to a Jeb Bush lightsaber battle with Republican front-runner Donald Trump when the January debate in Iowa rolls around.