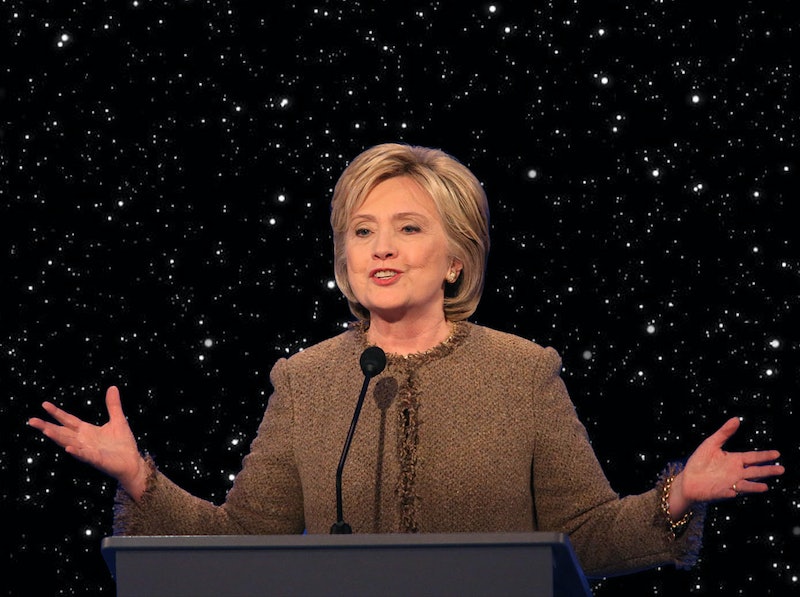 In her closing statement, Hillary Clinton quoted Star Wars in the Democratic debate in New Hampshire Saturday night. Ending the whole show by saying, "May the Force be with you," it seemed like Clinton was invoking her destiny to become the next president of the United States. Or, maybe she was just trying to win more popularity points with all the voters obsessing over Star Wars: The Force Awakens that hit theaters this weekend.

Just as Luke Skywalker fulfilled his destiny by becoming a great Jedi, many Clinton supporters — and probably Clinton herself — believe it's the former secretary of state's destiny to become president. Was she hinting at her future, or trying to use the Force to will voters to choose her at the ballot box?

As all Star Wars fans know, the Force is very powerful, and could be extremely beneficial for any presidential candidate. If Clinton could simply direct voters to support her, her campaign's job would be much easier — though she's still the Democratic front-runner by a long shot. This brings up an important question: Does Clinton consider herself a padawan or a Jedi master? Based on her constant assertions that she would be a strong leader for America and has more experience than any other Democratic candidate, I think it's safe to assume that she would describe herself as a Jedi master who's perfected her use of the Force.

Clinton's campaign is essentially parallel to a Star Wars movie in my mind now, and since she would no doubt place herself on the side of the Rebels, fighting against the Empire, that automatically makes the GOP the bad guys — Clinton is just fighting the good fight against the evil Republicans. Not surprisingly, Trump sided with Darth Vader in a 2006 Star Wars-themed trailer for The Apprentice, saying he liked Vader's "style." So, both candidates are agreed on which side the they fall on.

If nothing else, the closing comment definitely got people's attention. Instead of reflecting on the candidates' answers and political agendas, voters were buzzing about the Star Wars reference, as they were either dying to see the new film or still reeling from the long-awaited experience. Even if Clinton only meant the phrase as a farewell greeting, it was still a bold statement.

The Force is strong with this one.

More like this
The 'Hocus Pocus' Sequel Finally Has A Release Date & It Makes Total Sense
By Shannon Barbour and Radhika Menon
What Does Doctor Strange’s Third Eye Mean?
By Arya Roshanian
Elizabeth Olsen's Chris Evans Friendship Update Was Accidentally Hilarious
By Grace Wehniainen
Meet The Disney Imagineer Bringing 'Guardians Of The Galaxy' To Epcot
By Charlie Mock
Get Even More From Bustle — Sign Up For The Newsletter