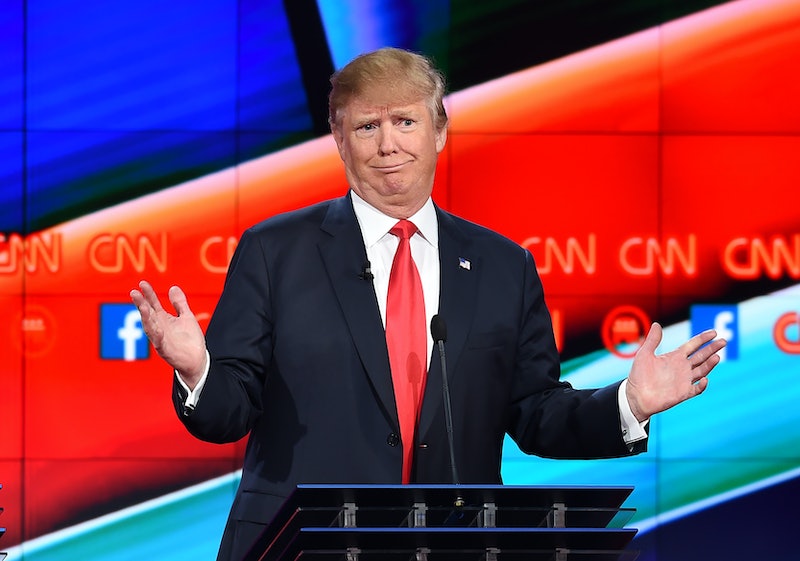 As Hillary Clinton, Bernie Sanders, and Martin O'Malley debated in New Hampshire Saturday night, Trump sat idly by and didn't live-tweet the event with the same speed and vigor that he normally does. Twitter's Government and Elections team tracked how many Twitter followers each presidential candidate — Democratic and Republican — gained throughout the show, and Sanders won the most support. Oddly enough though, Trump won more Twitter followers than Clinton during the debate, even though he barely tweeted anything.

Sanders defended his title as the social media champion after garnering more followers than any other candidate during Tuesday's GOP debate in Las Vegas as well (which didn't look promising for the Republicans' chances in the general election). Now, the parties' tables have turned, as Trump, the GOP front-runner, out-paced Clinton, the Democratic front-runner, with minimal effort. Throughout the Democratic debate, Trump retweeted multiple people who were either praising him or bashing the Democrats, but he only actually tweeted two things himself. He said, "@GStephanopoulos stupidly believes that Hillary wants to run against me because she said so. She says that so people believe it - opposite!," and, "@jonkarl was totally misled, and he fell for it, that Hillary wants to run against me. She knows that I am her worst nightmare-Jon doesn't!"

Of course, Trump's boisterous social media presence has attracted followers since he joined the presidential race, because watching him insult nearly every person who criticizes him or his campaign is just plain entertaining. Clinton's Twitter, on the other hand, is much more professional and politically-correct, which obviously provides less amusement for many.

A recent NBC News/Wall Street Journal poll revealed that Clinton would currently beat Trump in a general election, with 50 percent of the vote, compared to his 40 percent. So, Clinton doesn't really have to worry just yet; however, it's still problematic for Clinton's campaign that Trump is getting more attention than she is, even when she's the one onstage. If there's one thing he knows how to do well, it's steal the spotlight.

Regardless of Trump, Sanders' quickly increasing Twitter following bodes well for him, and the Democrats as a whole. The simple fact that a Democratic candidate was the most popular during both parties' debates this week shows that young voters are leaning left — millennials are the most liberal age group after all, and a recent poll from the Harvard Institute of Politics found that young Democrats want to see Sanders become the next president.

Not surprisingly, Martin O'Malley won less followers than Sanders, Trump, and Clinton, as most people are shocked he's still in the race at all. All three Democrats had strong debate performances on Saturday though, so maybe Clinton and O'Malley will reach more people on Twitter throughout the week.