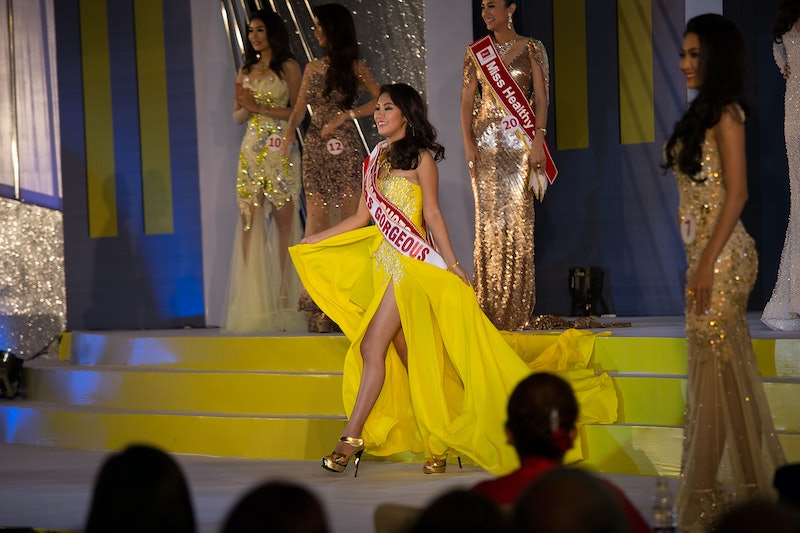 When watching a pageant as big as Miss Universe, most of us rarely stop to think about how these women have arrived at such a position. But the rules and regulations for the event can get pretty strict and trying, especially considering the different levels of competition that these women have to go through to get to the event finale. Realistically, the effort that the contestants have to put in order to get into Miss Universe is real, and undoubtedly about so much more than simply being beautiful or wearing an expensive gown.

Firstly, in order to get through to compete in Miss Universe, each contestant has to win the national competition and gain her country's title. For example, Miss USA will be representing America at Miss Universe; but to receive the Miss USA crown, the contestant had to win her state's crown first. Just take Olivia Culpo, for instance, who won Miss Universe in 2012. First she had to come in at No. 1 at Miss Rhode Island, then at Miss USA, and finally at Miss Universe.

In addition to competing in the many stages of pageantry, the women also have to adhere to a strict set of guidelines.

Although it's pretty well known by now, there's an age range that is strictly upheld when it comes to entering and competing in Miss Universe. According to the pageant's website, every contestant must be 18 years old by Jan. 1 in the year they wish to compete, and under the age of 27. A similar rule is in place for Miss Teen USA, whereby a contestant must be between 14 and 19 before Feb. 1 of the year they wish to compete as well. There's no info available as to why this seemingly arbitrary age cap is in place.

After meeting the age requirements for Miss Universe, one also has to give up some pretty personal experiences; and upon winning, give up these things for an entire year until the next Miss Universe is crowned. Not only can Miss Universe not be married — or divorced, annulled, or separated — according to the pageant's site, but Miss Universe also cannot be pregnant, ever have been pregnant, or have parented any children.

These rules might seem extreme, but they're arguably there to ensure the woman crowned Miss Universe is readily available for the many appearances she'll be expected to make in the following 12 months. Of course, the first ever Miss Universe in 1952, Armi Kuusela, gave up her title a month before finishing her reign in order to get married.

Also worth keeping in mind if you make it through to the Miss Universe competition — or even through to a national competition, such as Miss USA — is that you can only compete once, according to Miss Universe's site. So crown hopefuls should really get to work on what they're going to do (and wear) as soon as they hear news of their entry into the pageant.

More like this
Kylie Jenner Wore A Literal Wedding Gown To The Met Gala
By Jamie Feldman and Kelsey Stiegman
Chelsea Woody On Shattering Stereotypes In Surfing
By Leah Groth
What Is Jeanie Buss' Net Worth? The Lakers President Is Uber Rich
By Hugh McIntyre
The 10 Best Waterproof Watches For Swimming
By Lauren Moison
Get Even More From Bustle — Sign Up For The Newsletter