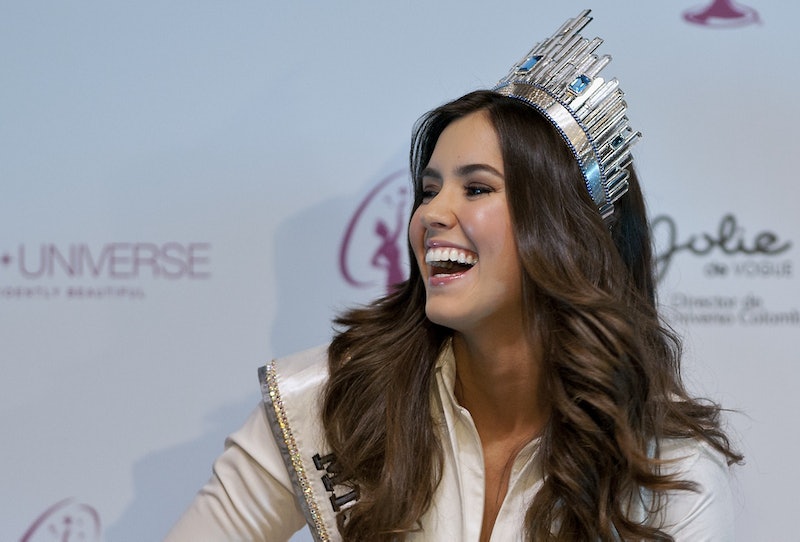 For me, the best part of being crowned Miss Universe would definitely be getting to wear the infamous, iconic Miss Universe crown. Yep, that'd be way better than the full time job and free New York apartment you get as part of the prize. If you're anything like me, then you likely have a well-stocked selection of plastic crowns in your own home too. Who knows? Maybe one day if I win the lottery, I'll get to replace them with some diamond-encrusted royal jewels that I've dreamed of throughout my entire life. But until then, I'm happy with my kitschy plastic.

Due to the nature of the crown (aka how ridiculously expensive it is), the piece is usually reused for several years before being replaced, according to the International Business Times. That's fair enough, in my opinion. I mean, anyone outside of the royal family spending more than $10 on a crown that isn't from Claire's is a total baller. The Miss Universe crown isn't just a crown, of course. It's an investment by the Miss Universe brand, but it's also an iconic figure, almost as memorable as the sash that the winner of the pageant will wear once crowned. And when you hear the amount of money, detail, and effort that go into one of these crowns, you'll understand why they're used more than once.

The current crown — which was unveiled last year for Miss Universe 2014 — features real diamonds, according to Miss Universe's website. It contains about 311 diamonds, in fact, weighing in at a mighty 10.37 karats. But that's not all. The Miss Universe crown also hosts an amazing amount of differing stones and precious metals that make it worth way more than the diamonds' value alone.

In addition to the diamonds, it is also made up from five large topaz stones, each weighing 18.6 karats and symbolizing strength and loyalty — key characteristics for a competitor, obviously — as well as 198 dark blue sapphire stones, meant to symbolize faith and wisdom. Underneath all of that sits the band of the crown, made from 18-karat white gold and weighing 220 grams all on its own.

International Business Time added that the heavy crown weighs in at 411 grams altogether, and has been given an estimated value of $300,000. Yep. That's more money than most of us will probably see in our entire lifetimes. According to the Miss Universe website, "The crown symbolizes and expresses the beauty, stability, confidence, and power of women around the world."

With all this knowledge about a $300,000 crown that took 3,000 hours to construct, I have even more anticipation for seeing which woman will get to wear all the sparkle at Miss Universe 2015. I just hope she appreciates the beauty of that statement piece as much as I would.

More like this
Fashion Trends From 2002 Making A Comeback
By Avery Matera
‘90s Streetwear Brands That Are Making A Major Comeback
By Dominique Norman
10 Nail Trends That Perfectly Capture The Early 2000s
By Paris Giles
14 Spicy Bralette Outfits For Vaxed Girl Summer, Round 2
By Avery Matera
Get Even More From Bustle — Sign Up For The Newsletter