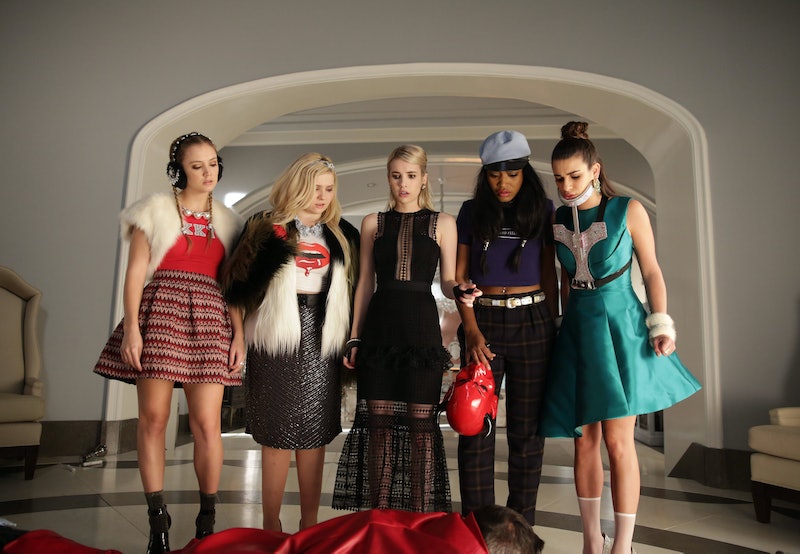 There are many things that I'm uncertain about in this world, but my absolute love and admiration for Ryan Murphy's Scream Queens is definitely not one of them. Not only did it pay tribute to some of the greatest horror films in history, but it also introduced so many unique characters that I can't believe we ever went without. (Looking at you, Chad Radwell and Denise Hemphill!) And while it's true that we have yet to know any exact details regarding a second season pickup (which I think we all know is definitely going to happen, right?), Season 1's rather ominous ending left viewers with multiple questions that Scream Queens Season 2 needs to answer ASAP upon its inevitable return.

Granted, I completely understand why Murphy left so many loose ends up in the air. I mean, every good horror film left its audiences with an epic cliffhanger to keep you coming back for more. But considering that the next season will allegedly take place in a new location (with only a few of the old characters returning), I'm worried that the next installment may forget to come back around to some of Season 1's unresolved storylines. So just to make sure that doesn't happen, I've rounded up some of the most prominent questions that deserve a second or third look in the coming season. Don't leave us hanging, Murphy. We're dying for some answers!

1. Who Attacked Chanel In The Asylum?

Considering how happy Hester was after getting away with so many murders, it was surprising to see Chanel get attacked by another Red Devil in the asylum, where she too seemed as happy and content as ever. So who was it that attacked her and why? Did Hester have a change of heart or was this the act of a copycat? I need to know!

I have a hard time believing that Season 2 wouldn't involve Emma Roberts in a big way, but that did make her getting attacked by the Red Devil (again) any less terrifying. Did she manage to make it out of that bloody situation alive or did this former Kappa President end up meeting her maker? Her fate can't be left up in the air forever. I won't stand for it.

3. Whatever Happened To That Garter Snake?

It may not have been the mail-order asp Chanel had hoped for, but I still remove that slithering creature from my mind. Is it just loose in the sorority house? Did Zayday keep it as a pet? I would just feel a lot more secure at night if I knew its whereabouts, please and thank you.

4. Are Dean Munsch & Wes Still Together?

It's not the happily ever after any of us expected, but I'd love to see where these two eventually ended up romantically. Grace will probably need therapy nonetheless.

5. Did Melanie Dorkus Ever Get Justice?

Not only was she covered in burns from head to toe, but then Chanel almost straight up murdered her, thinking that she was the Red Devil killer. I mean, talk about getting the crappy end of the deal. Is that just the last anyone ever saw of her? Did she go on to live a better life away from Kappa House? A little follow-up on her life would be nice.

Hester made Chanel No. 3 believe that she has a split personality that goes by the name Dirty Helen. Was this just completely made up or does she suffer from this disorder? If it's the latter, I would LOVE to see Dirty Helen play a more prominent role in the future. (Heck, I'd love a spin-off centered just around this concept.) Plus, there's no such thing as too much Billie Lourd.

7. Did Chad & Denise Ever Reconcile?

Because I honestly don't want to live in a world where they aren't together. Go on and chase those waterfalls, you crazy lovebirds!