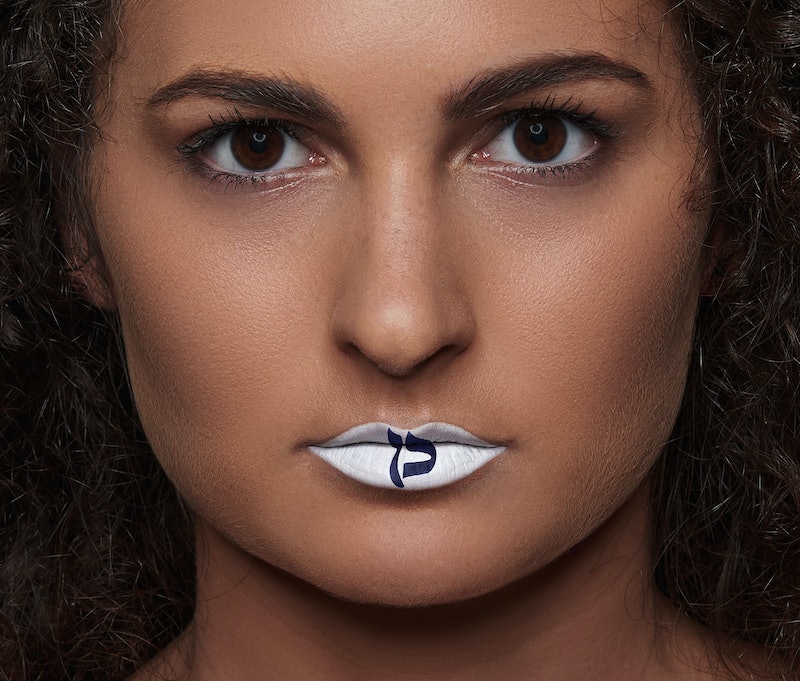 Instead of assuming that only "no" means "no," new affirmative consent standards are dictating that only "yes" means "yes" — and that's a good thing. But what happens when a "yes" is not enthusiastic, but rather given under pressure, coercion, or threat? Miklos Kiss' "Silent Consent" photography series examines situations around the world where "yes" does not mean "yes" because women are not allowed to say "no."

The photos feature women with lips painted the colors of different countries' flags. "These images have a hyperrealistic feel to them: The faces come really close to the viewer, so close that you can't ignore them," Kiss, a Hungarian artist, told Bustle over email, adding that he hopes they serve as "a constant reminder that there are women who could say 'no' but instead are forced to remain silent thinking that they don't have other options."

The contrast between these women's shut lips and the words painted on them illustrate how a "yes" can be empty when the speaker has no voice. The words on their mouths are not coming from within, but are literally put on them, concealing whatever words they may actually want to speak.

This problem manifests in many different situations throughout the world today. For example, one out of nine girls in developing countries is married off by age 15, and 3,000 girls were forced into marriage in the United States alone over a two-year period. As children, these girls do what adults tell them to because they've been taught to obey and have nowhere else to go.

In addition, marital rape is still legal in many countries, including China and India. In Jordan, rapists can even escape punishment by marrying their victims. This means that 2.6 million women may agree to sex with their husbands simply because they think they have to — which is not really agreement, since consent must be given freely. It also means that women who recognize their husbands have raped them lack legal recourse.

Other forms of domestic violence also trap women in situations where "no" is not an acceptable answer. Globally, nearly a third of women who have been in relationships have experienced physical or sexual violence at the hands of their partners. Many stay in these relationships not because they actively choose to, but because they don't have other options or simply don't know what the options are.

We cannot empower women to get out of any abusive situation if the situation itself is not recognized as unacceptable. "Usually, campaigns like this are only focusing on women who know that they are being abused," Kiss said. "I wanted to shift the attention to those who are not aware that they are under abuse. Or, they are just too afraid to admit this to themselves because their society, their traditions, or their families and friends are forcing them into this behavior."

Hopefully, images like these can elevate the conversation about consent, sexual and otherwise, beyond a "no means no" or "yes means yes" paradigm. Affirmative consent has thankfully acknowledged that someone can communicate "no" without voicing it outright. But with the word "yes," the reverse is true. Sometimes, women obey men and others in power because the consequences of refusing are too dire. Other times, they have not even been taught they have the right to refuse. A "yes" given under these restrictions is not affirmative at all. Kiss's photos remind us that if we want to create a world full of interactions that everyone consents to, we need to ensure that everyone has the power to say "yes" or "no" in the first place.