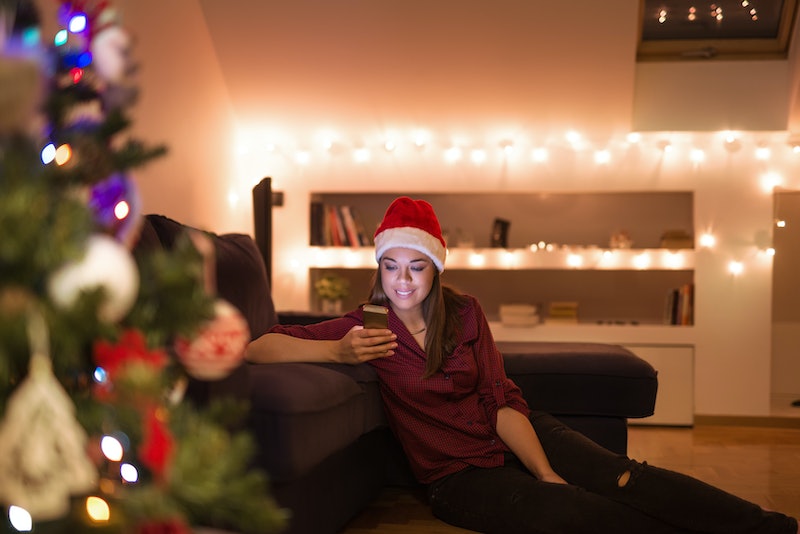 When you live in a huge metropolitan area, it can seem like the dating options are limitless: There's no shortage of single 20-somethings to grab a drink with on any given Tuesday. But when the holiday season rolls around and us city-goers flock back to the places of our humble beginnings, there's one harsh truth we have to face: Online dating in your hometown is just plain weird.

I live in NYC now (and Chicago before that), so you'd probably never guess that I actually grew up in a small Kentucky town where a lot of people marry their high school sweethearts and only a handful escape to the big metropolises. Because everyone knows everyone, online dating is pretty much obsolete here. But obviously, I, a dating app addict, wasn't just going to sit at home for two weeks and not browse through my OkCupid matches.

Needless to say, my findings were less than ideal, and I am already missing the (relative) normalcy of NYC dating life. Here are seven things that are different when you try online dating from your hometown during the holidays — you can at least find solace in the fact that you're not alone in the struggle.

1. It May Be Slim Pickings If You're Not In A Big City

Not that there aren't plenty of less-than-average looking people on dating apps in big cities, but I'm so accustomed to the cute hipsters of Brooklyn Tinder that I was a little shocked to see the offerings here in my hometown in Kentucky. It might just be because all the good looking people are already snatched up (not surprising), or maybe all the attractive ones got together and said "Let's run away!" Either way, saying I was disappointed is a serious understatement. And judging by the insane number of Super Likes I've gotten since being here, it appears that my competition isn't exactly stiff, either.

I've been here for a few days now, and I'm honestly dreading the moment when I come across my brother on Tinder. The pool here is smaller — there are fewer people, and dating apps aren't as prevalent in smaller towns — so it seems like an inevitability that, sooner or later, I'll be swiping and — bam! — there's my older brother, who I know uses Tinder because he always texts me and asks stupid things like, "Some girl just said 'hi' to me, what do I do?!" When that moment comes, I'll be swiping left faster than ever before (and please spare me your obnoxious "oh but you're from Kentucky!" jokes).

3. You Could Literally Run Out Of Matches

OK, this is definitely not a thing in NYC where there are MILLIONS of people, but in smaller areas, there actually is the possibility that you can run out of people to swipe on. It's not like living in the city where it's common to be single and on dating apps. In fact, people might think you're weird because you're on a dating app (at least where I'm from, anyway).

4. Your Matches May Have Different Values

Not to generalize the entire population of an area, but let's just say that people where I'm from typically have very different ideologies than I do, so I'd be hard-pressed to find someone who held similar views on things like religion, culture, gender, and politics (aka hugely important issues to me). Sure, it's still fun to browse, but I'm not deluding myself into thinking I'll find love.

One of the most awkward things about returning to your hometown? Running into someone you knew in high school literally everywhere — coffee shops, the grocery store, the liquor store, and yes, on dating apps. Whether it's your ex-boyfriend or just that weird guy from your calculus class, there's the definite possibility that you'll see someone you used to know while you're swiping through Tinder from your childhood bedroom. Whether you want to open that can of worms and go for it is totally up to you, though.

Let's say find a cute guy or girl you actually want to go on a date with while you're home this Christmas. Aside from the numerous problems with the strictly virtual side of online dating in your hometown, there's also the impracticality of managing to pull off the home-for-the-holidays hookup.

For starters, where are you even going to go on a date? In NYC, there are hundreds of bars to pick from; in my hometown, there is literally one bar, where you'll probably run into everyone you know, which is not exactly ideal for a first date spot. And let's say things go well and you want to get a little alone time with your date. Where are you going to get down and dirty with this person? Unless you happen to be staying in a hotel, you'll have to get creative with your hookup spots. Not saying it's impossible, but it's a bit more complicated than "my place or yours?"

7. You May Actually Have To Explain What You're Doing To Your Relatives

When you're home for the holidays, you may have to suddenly start explaining where you're going when you leave the house at night— or why you've been on your phone for the last 72 hours. Sure, most millennials are aware of how dating apps work and are used to hearing about them by now, but there's a good chance your parents don't quite get how they work or how common they are. Telling your roommate you're meeting up with someone from Tinder later that night versus telling your grandma about your dating app date is bound to get very different reactions.

More like this
50 Valentine’s Day Instagram Captions To Post If You’re Single
By Jessica Booth, Lexi Inks and Carolyn Steber
12 Anti-Valentine’s Day Memes For People Who Are So Over Romance
By Meghan Bassett
23 Super Sweet Things To Write In A Valentine's Day Card
By Karen Belz and Lexi Inks
12 Aphrodisiac Desserts To Spice Up Your Valentine’s Day
By Kaitlyn Wylde
Get Even More From Bustle — Sign Up For The Newsletter
From hair trends to relationship advice, our daily newsletter has everything you need to sound like a person who’s on TikTok, even if you aren’t.