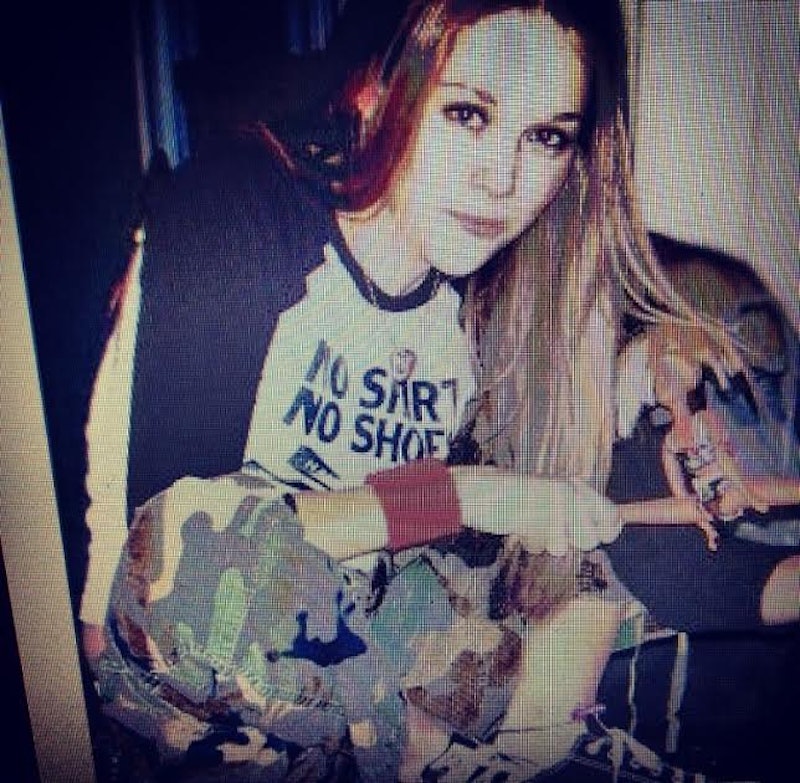 For the record, that picture up there? That's me wearing camo army pants, a guitar pick necklace, a raccoon inspired makeup look, a Sum41 wristband, half-heartedly tearing apart a Barbie doll, all the while siting on a stationary skateboard in the middle of my carpeted, suburban living room.

Back in high school, I went through a very long emo stage. And to be honest, when I look at my poetry degree and Bon Iver Pandora station, I'm not exactly sure I've yet graduated from said emo stage, but it's different now. Because in high school, if you were shy, or deep, or introspective or vulnerable, you felt isolated. You were isolated. You felt like the rest of the world was having a good time and you were stuck under an unmoving storm of black clouds.

Musicians like Elliott Smith, Bright Eyes, Ben Gibbard, Radiohead and Sigur Ros made you feel like there was hope — there was someone else out there who felt the world all too heavily, too. There was someone out there to validate the weight on your chest and the shadow of your frame. And once you found these bands, you wanted to listen to them all the time — you wanted to keep their words close to you to give you the encouragement you needed. You needed those voices to remind you that one day you will get out of high school and find your passion and your people.

And for the most part, that's how it works: you leave high school, find more like-minded people in college or in the professional world, and stop feeling so alone. And while you'll always carry a penchant for layered harmonies, glass shattering bass lines, composition notebooks and a melancholy disposition, you'll learn to embrace other notes, too. So if you were an soft-core emo kid in high school, you probably remember some of these things too well:

Sometimes a few scuffs and mud stains weren't enough to make Converse sneakers look worn-in. When they're too new looking, they take on a clownish appearance. So instead of writing your favorite song lyrics on your hand, you started to write them on the whites of your shoes. "Waiting to finally be caught," on your right toe rubber and "so simple in the moonlight" on the left toe rubber.

The Idolization Of Sylvia Plath And Edgar Allan Poe

When you began to study Plath and Poe in high school, you became obsessed. While your teachers tried to avoid the obvious depression and substance abuse themes expressed in their work, you focused on it. You finished The Bell Jar and Ariel before anyone else in your class and thought long and hard about getting Edgar Allan Poe's poem "Alone" tattooed on your ribcage in American Typewriter font.

These musicians were more than the kings of your Diskman and iPod. They were your poets, your thought reflectors, your salvation. They said the things you needed to hear and they gave words to the feelings you couldn't describe. Your peers probably thought this music was depressing, but for you, it was enriching and uplifting.

All the better to hide in! During your soft-core emo phase in high school, you preferred to exist under the radar. You didn't want to stand out with bright colors or overly trendy clothes. Hoodies with long sleeves were your favorite. You probably had a few waffle shirts with thumb holes, too. Because if you had it your way, you'd probably walk around in pajamas wrapped in a blanket all day, but since school dress code forbid it, you made do with what you could.

Sometimes feeling incredibly dark and weathered inside, but looking incredible soft and childlike on the outside was confusing. Your young, sweet reflection did not align with your dark, hard disposition. Somehow, dark eye makeup helped. It made the outside match with the inside.

Straight Hair, In Your Face

Maybe you had the guts to dye your hair black, or maybe you just went for the good ol' straight, thick, long bangs wrapped across your forehead. Either way, you owned a hair straightener and experimented with hairstyles you could hide under. Your hair became a shield during the day but doubled as a style suitable for concerts at night.

Your journal was never far. You carried it with you to school and wrote inky little notes to yourself throughout the day. Sometimes when you were feeling energetic, you'd go over your lettering until it was thick and black and smudged on the fleshy part of your hand. When you had nothing to say, you'd write song lyrics, but more often than not, you had something to say. Then, when Livejournal came around, you really found your place. No friends in high school? No problem, the world wide web is your friend! You went to town on that old school CMS every day after school. You had tons of friends on Livejournal and told them all of your secrets.

American TV was too PG for you. Once you found out about the BBC and E4, you were hooked. Skins had some badass characters like Effy and Cassie who weren't afraid to show themselves and be vulnerable and raw and imperfect. These kinds of characters gave you hope and also made you want to move to the UK.

Once you graduated from Livejournal, it was time for Myspace. Myspace was a place where you could connect with other emo kids from around the world. You could decorate your page like how you'd decorate your room if your mother would let you. There were options for skull wallpapers and typewriter fonts and you could even chose your favorite emo song to play when people went to your page. You'd upload all of your depressing selfies and use the note section to write long, lyrical posts about feeling like an outcast and wanting people to notice you ... all while Lua played on repeat in the background.

"But it's home to me and I walk alone" was among one of your favorite away messages. You probably didn't need an away message because you were never actually away from your computer. You just used it to warn people of your never-changing disposition. AIM was used for conversing late night with new internet friends and planning concert trips.