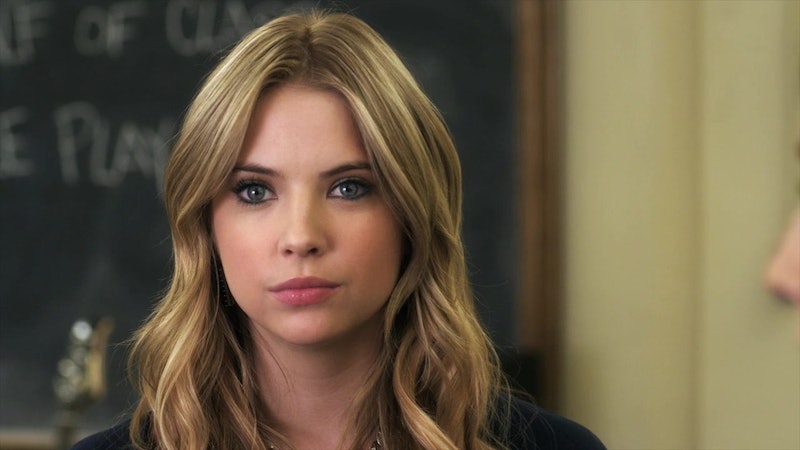 If you've been following any news regarding Season 6B of Pretty Little Liars or you tuned into that "Five Years Forward special," then you're already aware of the dire, impending fate of PLL's best (don't challenge me) OTP. Yes, Haleb is no longer a thing, because Hanna Marin decided to pursue her dreams, jet off to Europe, and get engaged to a human that isn't Caleb. (Thanks Hanna!) It's a lot of information to process, so I'll let you have a moment. You good? Good. Now, you'll be happy to hear that we finally know the name of the lucky guy who will play Hanna's love interest. TVLine has exclusively reported that Australian Actor, David Coussins is playing Hanna's fiancé on Pretty Little Liars , a man named Jordan — which pains me to type, but have just done, anyway. Thank you for your continued support.

As we learned in the "Five Years Forward special" last month, Hanna and Jordan met in Europe after Hanna moved there to pursue her career in the fashion industry, presumably after she broke up with Caleb. TVLine claims that Jordan has been described as "having a down-to-earth quality" that matches his "sophistication and swagger." They've also noted that Jordan is "immersed in the fashion industry," like his fiancé Hanna. (Will typing the words Jordan, fiancé, and Hanna in succession ever not be hurtful?)

Jordan seems like he could be a good fit for Hanna (#HALEB forever though), but what about the actor behind this new love interest? What's he like? According to his IMDb page, Coussins was born in Melbourne, Australia and is both an actor and director. He has a fair amount of work under his belt — mostly TV and short films — but the fact that he's also been involved behind the screen is intriguing. Perhaps he'll add some dimension to the set and serve as an interesting counterpart to Caleb's boyish innocence and good looks.

After all, a lot of time has passed. Maybe Caleb and Hanna were just no longer a good fit? No, no. Who am I kidding? (#HALEB forever.)

We'll have to wait and see how this plays out. Even though I'm pretty skeptical of any fellow who's of the "non-Caleb" variety, David Coussins seems like he could shake things up a bit, and you better believe I will be there to watch it all go down January 12.