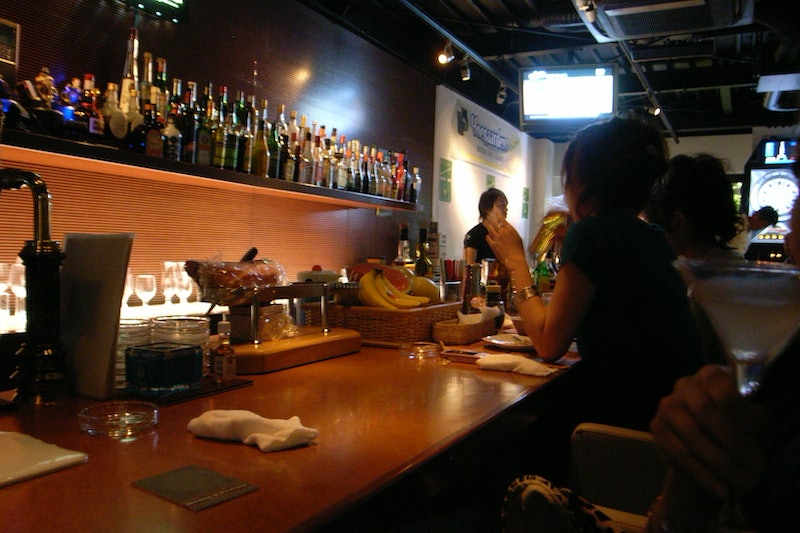 Pickup lines are inherently problematic. They're typically used with the goal of manipulating someone into talking to you or dating you or sleeping with you, rather than considering what they actually want. But you know what's even worse than pickup lines as a general concept? Insulting pickup lines.

Now, if you're thinking that insulting pickup lines don't make any sense because insulting someone goes against the whole objective of picking them up, you would be right. But pickup artists aren't always thinking in those terms. They often don't respect women, since the pickup artist community (yes, there is a community) is built around the view of women as potential conquests.

Other users of pickup lines don't necessarily subscribe to pickup artist culture but simply don't know how else to start conversations with people they're attracted to. My advice to them would be to approach the situation as you would with someone you're looking to befriend. You can also check out this list I wrote of questions to ask a date or potential date that are more substantive than "So, what do you do?" For women especially, it's very refreshing just to be treated like a human being in these situations.

Pickup lines like these ones, though? They'll probably have the opposite effect of the one you intend. Just FYI.

This is meant to flatter someone by implying they could be a model, but while it may compliment their figure, it insults their internal qualities. After I replied "no" to this line, the picker-upper responded, "When did you quit?", assuming that all women with a certain look must either be models or have been models at some point. By discounting someone's (usually a woman's) ability to hold professions that are not primarily based on appearance, this line reduces women to their looks. The fact that a woman is attractive does not mean her looks are her best or most important quality, so a more appropriate way to flatter her would be to tell her she excels at something she really cares about, like dancing or making literary references.

It's not OK to fetishize someone for their race. Full stop. Even if you have a racial preference that's beyond your control, calling attention to someone's race is a rude way to start a conversation. Plus, beyond being an insult, this is just a weak compliment. It implies that what you like about that person is not something unique to them but something they share with every single person with a similar background. Not a way to make someone feel special.

This line implies that the recipient is incomplete for being single, and that you want to "fix" that. This promotes an unhealthy view of romantic partners as filling gaps in each other's lives. But not everybody has a problem with being alone, and in a healthy relationship, people don't complete each other's lives, but rather add to them. You don't know a stranger's goals — maybe they're totally happy being single and want to remain that way. Even if they are looking for a relationship, there's nothing shameful about their current life.

4. "You Have [A Desirable Trait] For [A Person Who Supposedly Lacks That Trait]."

"You have big tits for an Asian chick." "You're pretty hot for a fat girl." "You look good for your age." “I actually like women who look like you.” We've all heard this kind of backhanded compliment in a bar or club somewhere. But by implying you're surprised to be attracted to someone, you're saying that people like them are not attractive — which might seem like an obvious truth to you, but not everyone buys into racist, fatphobic, ableist, ageist, cisnormative beauty standards.

Negging is intentionally insulting, so anyone in the pickup artist community already knows this. But in case you're not familiar with the term, a "neg" is an insult given to a woman to lower her self-esteem so that she doesn't think of herself as above dating the pickup artist. It's also sometimes phrased backhandedly or thrown in with a compliment so that the recipient might turn to the pickup artist to increase her self-esteem. (Yup, I told you pickup artistry was gross.) For example, a pickup artist once told me, "You're obviously cute but you could go up a few points with better hair and makeup and fewer solid colors." Yes, a real, live person once actually said that.