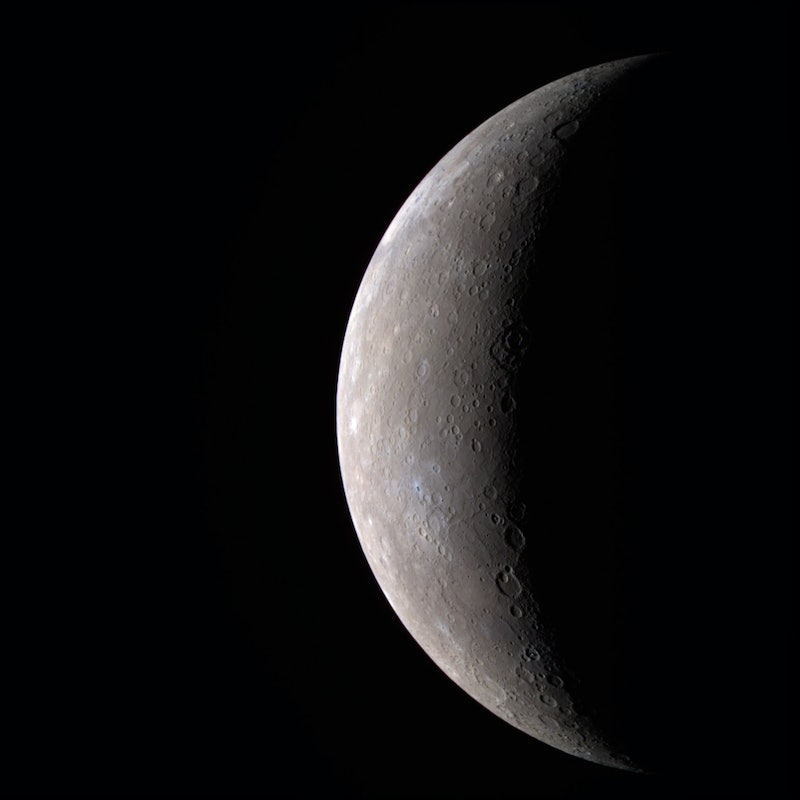 Well, my friends, we seem to have made it through the astronomical sh*tstorm was that 2015 relatively unscathed. Let's all congratulate ourselves for a brief moment before turning our eyes to the new year, because guess what? Life moves on, and Mercury goes retrograde every year, and time is a flat circle, and we're captured on a carousel of of it or whatever. But when is Mercury retrograde in 2016, exactly? Oh boy. Here's your guide, because 2015's super moon, blood moon, several lunar eclipses, and mess of planets going retrograde were just the beginning.

Let's start with a little refresher on what Mercury retrograde means. Three to four times a year, for around three and a half weeks at a time, it looks, to those of us on Earth, like Mercury is moving backwards. To be clear, it's not. The best description I've heard to describe this phenomenon is to imagine the Earth and Mercury as two cars driving next to each other. Because Mercury is closer to the Sun, its orbit is much shorter than the Earth's. If Mercury initially goes faster than Earth and passes it, it looks like Mercury is going forward. If Mercury is then passed by Earth, it looks, to Earth, like Mercury is moving backwards.

Mercury affects all of the communication elements in our lives, both in the way that we express ourselves and the manner in which we synthesize information from others. Thus, when Mercury goes retrograde, a certain amount of, um, confusion tends to happen. Miscommunication and mistakes happen. Chaos happens. It's not so great sometimes.

Mercury will turn retrograde on Jan. 5, 2016, so the first occurrence of the year is happening just in time for you to be going back to work after a nice long holiday and sulking about it. During this time, be wary of making any big plans or signing any big contracts. Double- and triple-check important documents that you prepare. Try not to initiate any major moves or actions (although, like, life marches on and you should do you). This particular retrograded period begins in the air sign Aquarius, which means an emphasis should be put on talking through your decisions and basing them on research and facts, as opposed to a more reactive, emotional approach.

But here's the thing: Mercury being in retrograde is not just, like, everyone running around screaming and occasionally bumping into each other. It offers the opportunity for a fresh perspective on your life. You may see, for the first time, a new way of organizing things. You may return to an old project you had abandoned, or an old relationship you had written off, or even receive a job offer from a former employer. You could come out of this retrograde a lean, mean, streamlined calendar machine. And what time is better for a fresh perspective than the first week of a new calendar year?

More like this
Your Daily Horoscope For August 16, 2022
By Alexandria Lettman
The Best Careers For Virgo Zodiac Signs
By Brittany Beringer
The 3 Most Humble Zodiac Signs
By Nina Kahn
How The August 2022 New Moon Will Affect Your Zodiac Sign
By Nina Kahn
Get Even More From Bustle — Sign Up For The Newsletter