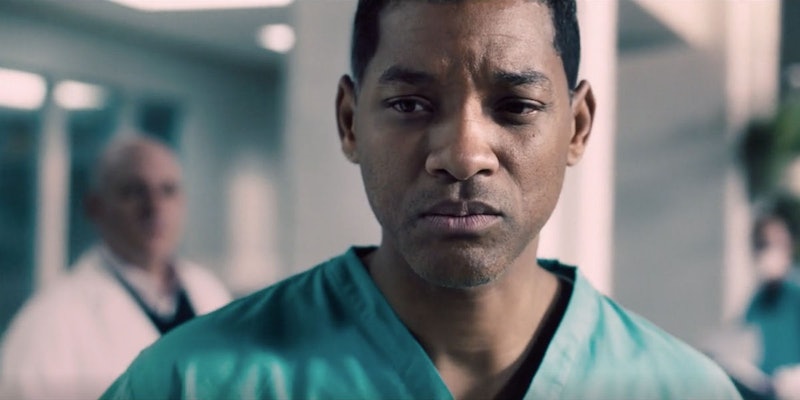 As a fellow native of Overbrook, West Philly, PA, I’ve always been a huge fan of Will Smith. But ever since he swaggered into my heart on The Fresh Prince of Bel Air, I’ve known one thing to be true: he pretty much always plays the same character. Regardless of how close his go-to on-screen persona might resemble his own personality, there's a certain type of guy that audiences have come to know as the usual "Will Smith character" — charming, yet egotistical. Sarcastic, yet sincere. He's always funny, popping out one liners that are destined for quotable GIFs, but he can also be serious when need be. Yet as popular as this persona has made him, the "Will Smith character" is getting a little repetitive. Thankfully, in his new film Concussion , Smith seems to have finally broken free of that mold, and takes on a role that's his most "un-Will Smith"-like role yet.

In Concussion, Smith plays Dr. Bennet Omalu, a real-life Nigerian-born pathologist who discovered that the multiple concussions that NFL football players were receiving over the course of their careers was leading to debilitating brain damage. This character is intelligent, tender, and determined, without ever becoming the the cocky caricature that Smith has so frequently played in previous films. The actor's Omalu is vulnerable, kind, and has an optimistic outlook on humanity that expects more from good people. It’s a performance completely lacking in Smith’s signature sarcasm and bravado, and is, overall, unlike anything he's ever played before. Finally, Smith has left the “Will Smith character” behind.

It's just surprising it took this long. Throughout his career, Smith has presented himself as a scrappy, resourceful, charismatic, guy, and those are the character types he gravitates towards in his roles. That persona is what has made him one of the most bankable actors in Hollywood history; just as a character in Concussion remarks that the NFL owns a day of the week, Smith came to own the Fourth of July weekend box office for years. For awhile, playing the same type of character worked in his favor, and not just financially. When Independence Day came out in 1996, Smith was fresh off of the end of Bel Air, and his character’s resemblance to the one he played in the show — cocky but sweet, sarcastic yet funny — helped ease his transition from TV to film. Rehashing the same personality traits gave audiences a way to remember him, right as he was first attempting to make his mark.

The problem then became that Smith stuck to that recipe for years, and rarely veered into new ground. I absolutely love the guy, and I could watch his shtick from film to film to film, but the repetition does get tiring. From Bad Boys to multiple Men in Blacks, from Hitch to Hancock to Focus, Smith has played the same type of character for far too long. Even in his more lauded and Oscar-nominated performances, Ali and The Pursuit of Happyness, Smith stuck to his most used moves: be authoritarian, but non-threatening. Float like a butterfly, sting like a bee. Knock ‘em down with charm and make them laugh with some funny one-liners. Sure, it worked, but what did it prove for Smith as an actor? Not much, other than his skill at playing the same person, again and again.

Which is why I'm so excited about his role in Concussion. It’s always great when an actor breaks out of his/her comfort zone and tries something new. Smith’s performance in Concussion reminds me of Jim Carrey’s in Eternal Sunshine of the Spotless Mind, Adam Sandler’s in Punch Drunk Love, and Jennifer Aniston’s in The Good Girl — work that proved these actors were capable of much more than what they were known for. Getting trapped in a shtick just because it’s comfortable and brings success is easy to do, especially when taking risks in Hollywood can lead to career ending moves. But stagnancy is bad, and despite Smith's two Oscar nominations, he's better known as a blockbuster king than a serious actor. Thankfully, he's branching out, and describing him as a true actor, not just a movie star, is getting easier. Keep it up, Fresh Prince.