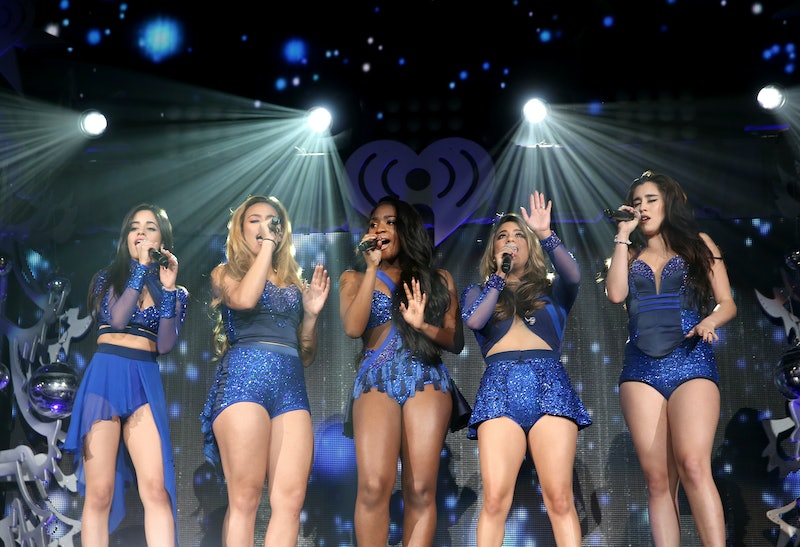 We've learned a lot of exciting details about Fifth Harmony's new album over the last several months, but for me, this latest development takes the cake: Based on its title alone (this is purely speculative), Fifth Harmony's new song, "She's My Girl," seems like it could pass the Bechdel Test. Score! Not sure what that means or why it's important? Here's the scoop: The Bechdel Test, which is named after cartoonist Alison Bechdel, the woman who's often credited with popularizing the concept, is a method of analyzing how fairly and realistically a film depicts its female characters. In order to pass, a film needs to feature at least two named women, they must talk to each other, and when they talk, they must discuss something other than men. (I realize "She's My Girl" is a song and not a movie, but stay with me here.)

Wrong. The Guardian reports that only 55.4 percent of films passed the Bechdel Test in 2014, according to a recent study by Silk. The test is frequently used to analyze both movies and TV shows, but popular music doesn't receive the same level of attention — which is a shame. Obviously (obviously!), women's lives don't revolve around men, but sadly, that's probably not the impression you'd get from listening to many of the songs on the Billboard Hot 100 chart these days. Personally, I think it's crucial for both women and men to see and hear women accurately represented in popular media, so this is a serious problem.

(In March, Pitchfork adapted the Bechdel Test to fit music. Check out their criteria here.)

Based on its title, "She's My Girl" seems as though it could be about platonic love — the love between friends — which could definitely help it pass the Bechdel Test. It would be a nice change of pace for the pop music world, not only because the top 40 radio airwaves are flooded with romantic love songs each year (which is boring), but also simply because so few female acts release singles that have nothing to do with dudes. For example, though all five members of 5H are self-identified feminists, the vast majority of their tracks are, disappointingly, about men.

Is this Fifth Harmony's fault? No, not entirely. Until recently, the five women didn't do much of their own songwriting, and I suspect they don't have total creative control over their music. Additionally, in our culture, women are expected to sing about men — it's the norm — so I wouldn't be at all surprised if 5H's record label intentionally steered them in that direction while they were starting out in order to "play it safe." But, now that they've amassed loads of die-hard fans (and have a couple of hits under their belts), I hope the band will be able to challenge this frustrating artistic "standard."

Over the past two years, a few pop releases have passed the Bechdel Test (Rachel Platten's "Fight Song" and Sia's "Chandelier" immediately come to mind), but we need more. On Tuesday, SPIN revealed that "She's My Girl" could be the lead single from Fifth Harmony's upcoming sophomore project. (The track was reportedly written by Tinashe, the up-and-coming pop singer who co-penned "Them Girls Be Like" from the group's debut LP, Reflection.) Fingers crossed the tune turns out to be a breath of fresh air.

According to SPIN, Fifth Harmony's new album could arrive in early 2016.