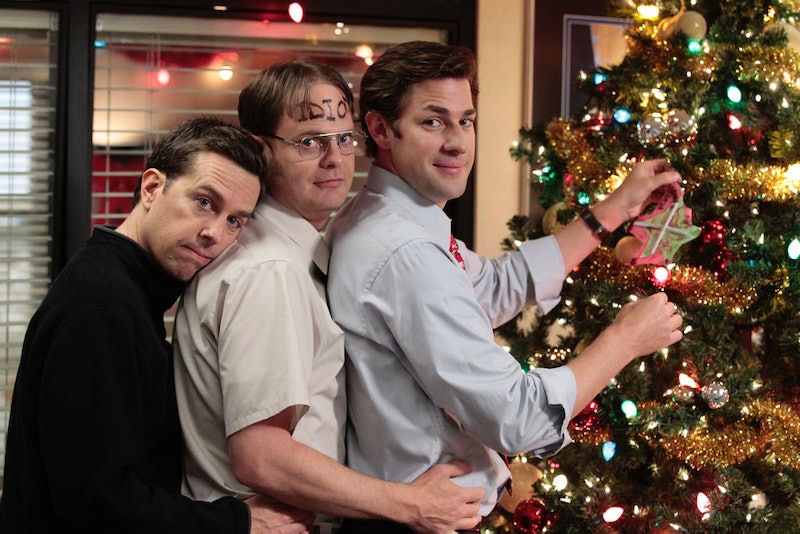 If you're in an administrative position at your office, you might tense up at the thought of office holiday parties — after all, you know you'll be the one in charge of unveiling the dusty, half broken decorations that are stuffed away somewhere in the supplies closet, while simultaneously trying to price out the cheapest party sub options for your boss. But if you're new to the office, envision something much grander based on how your boss talked up the holiday celebration around Thanksgiving, or maybe tried to prep by watching a few Christmas-centric episodes of The Office , there are probably a few office party expectations that you'll have that are bound to crash down based on the reality of the entire ordeal.

On television, office parties are usually depicted as alcohol-fueled ragers, where embarrassing stuff happens that's quickly forgotten about the next day. You probably imagine that it's a way to unwind after a long, tough year of making deadlines and dealing with less than cheery customers. At my last office, we held the "party" while the business was still running, meaning that the only real difference to me between the party and a typical office day was the addition of a shrimp plate. Yet while the party made me more nervous than ever (since I don't really like to mix booze with coworker interactions at all, nor do I enjoy wondering if my fellow office comrades will use their best judgment in transporting home) I still had to smile and pretend that I was chock full of holiday cheer. Because I was the receptionist. It was my job.

If you're prepping for your own office holiday party, here are some ways you can prep to help you avoid any kind of disappointment.

Expectation: Your boss will take the time to acknowledge all of the hard work that the office put in that year

Reality: Your boss will probably thank you for showing up, even though it was somewhat mandatory, and leave you guessing as to whether or not any kind of Christmas bonus will magically appear.

While many bigger offices are super upfront about extra cash, many "Mom and Pop" locations leave people guessing. And let me get this straight — since college, about 80 percent of the places I've worked have been small businesses. I love small businesses. But I also like knowing whether or not to expect a padded paycheck, since, you know, rent.

Expectation: There will be a couple holiday hookups

Reality: If a hookup happens, it probably won't be in the midst of your office for all to see. And it might be between people who really shouldn't be hooking up. Like, the son of the boss and the HR woman who may or may not be married. No matter what, a holiday hookup usually isn't a fun thing to uncover. Since you work with these people, you know that awkward gossip and rough, dramatic interactions will be forthcoming.

Expectation: You'll finally be able to see the true personalities of some of your coworkers

Reality: An office party is still, quite often, held in an office. If anything, you'll see how uncomfortable it is to see the sales guy have a few drinks and shoot his mouth off about politics. No matter what, you've already got a good idea on how these people operate, so an office party won't help you uncover any new-found personality traits.

If the party is held in another venue, there's a good chance that your coworkers will still be wearing work-appropriate clothes, or even get a little fancier. They'll likely dress for the party, and not for their personality. (And the same should go for you, too.)

Expectation: You can let loose at work

Reality: Eh, somewhat. Just because the party atmosphere decor is different from your work atmosphere decor doesn't mean you should forget that you're still at work. You need to be on your best behavior, and not feel comfortable enough to badmouth your boss to your fellow employees based on one drink too many. Make sure to save the gossip for your girlfriends after the party has ended.

Expectation: Your coworkers will love your boyfriend

Reality: They might, but remember that he'll be feeling pretty awkward. Since many office parties allow dates, bringing your steady dude is often a good idea. Just don't try to sell anyone too hard on him. Let him mingle, meet people, and have some food. No matter what, let him know that you're not too busy to rescue him from an awkward conversation with the young guy in finance, who was "so bummed to hear" you were taken in the first place.

Expectation: Facebook would love to see these pictures of you having an amazing time

Reality: Remember that some companies frown upon being represented on social media in a way they can't control. And if you and your coworkers look especially boozy, or think that a "flipping the bird" photo would be super hilarious, you could get into massive trouble for that. Check the rules before you post, and just be smart about the whole thing. Even if you have excellent privacy settings, just assume that the boss will see everything.

Expectation: The food will be great!

Reality: The food might not be great, especially if the venue is the office itself. But you know what? That's OK. The food is free, and free stuff is great in its own way. Channel your inner college student, who used to be jazzed over a free keychain that you swiped during a health fair.

Reality: They probably will, especially if the two of you are close. But remember that their reaction will probably be a bit subdued, simply because Secret Santa can often be a long event if it's held as a "game" that involves everyone. And if it's a private joke, they probably won't feel comfortable explaining it to the entire group. Most people will be super grateful that you put thought into it, but they also just want that part of the night to be over with, quickly.

Expectation: After the year you had, this holiday party is bound to be amazing

Reality: If there were a bunch of layoffs, or if the office was so busy that everyone seems to be on the verge of a mental breakdown, prepare for a somewhat minimal party. While you're hoping for a fantastic payoff, the people in charge of planning/paying for the event might have put it all on the back burner.

The best thing to do, truthfully, is to go in with no expectations. That way, you can enjoy it for what it is. But if you're expecting the best and find yourself in the midst of a mediocre, karaoke-themed bash, you're going to be disappointed. If you're a transplant from a bigger office that seemed to truly value Christmas-related events, remember that every office comes with different traditions. Just be happy that there's a party, as awkward as that party may be.

More like this
Is The Insta-Famous Always Pan Actually Worth It?
By Jessica Goodman
On TikTok, Orange Wine Is The Varietal Of The Summer
By Madeleine Aggeler
Taco Bell Announced A Crunchwrap & Tostada Made With Cheez-Its
By Emma Garza
Starbucks Released New Menu Items For The Summer
By Emma Garza
Get Even More From Bustle — Sign Up For The Newsletter