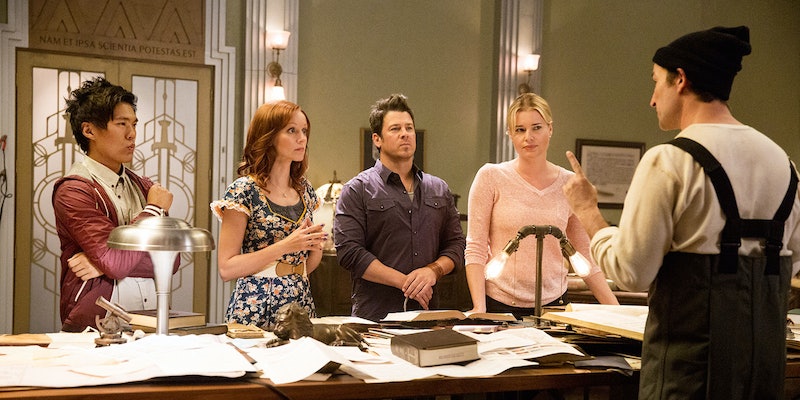 The Librarians seems to keep going and going. First it was a made-for-TV movie, then it was a series of made-for-TV movies, and then it was its own spinoff TV series. Makes sense: Libraries are hot right now. Tell me you don't know someone studying for a Masters in Library Science; I think every third person I know has an MLS degree. Of course they'd want to see a series where librarians who solve supernatural mysteries (even if it doesn't really have anything to do with the Dewey Decimal System). But is that enough to keep the series going? Will The Librarians return for a third season?

Rejoice, book nerds! Even though the finale of the show doesn't air until Dec. 27, TNT has already renewed The Librarians for a third season, as reported by Deadline. Of course there are more artifacts to chase down and literary magic to keep in check. But, unfortunately, there's also some (pretty expected) bad news: According to Variety, the show isn't coming back until fall of 2016. So, what's a bookish type to do until then? There are plenty of other fictional librarians to watch. Here are a few you can tune into while waiting almost a year for The Librarians to come back.

Evelyn From The Mummy

If you can't bear to watch librarians work without them chasing down some kind of supernatural, legendary something or other, Evelyn is your best bet. Not only is she a librarian, but she's an Egyptologist — and she's pretty skilled at chasing down a mummy.

Giles From Buffy The Vampire Slayer

Of course, mummies aren't the only monsters defeated by knowledge accessed from a library. That's basically Giles' whole deal. It's what makes him such a good Watcher.

Barbara Gordon From The Batman Comics

In Gotham, Barbara Kean may be a murderess and wannabe supervillain, but in DC Comics, Barbara Gordon is Commissioner Gordon's daughter, a librarian...and Batgirl! Another librarian-hero.

This 1995 film stars Parker Posey as Mary, the titular party girl who unexpectedly falls in love with the Dewey Decimal System. Basically, Mary is the first incarnation of a "cool" librarian (and I'd watch Posey in anything).

Belle From Once Upon A Time

Like a bazillion of you out there, I'm brunette, brown-eyed, and love books, so Belle has always been my favorite Disney princess. The fact that Once Upon a Time turned that princess into a librarian only sweetened the deal.

Tammy II From Parks And Recreation

Forget tired old stereotypes of the old, shushing librarian, and tired new stereotypes about the quirky, cool librarian. Tammy II, one of Ron Swanson's ex-wives, works at the library, sure — but she's pure evil incarnate, and that is awesome.

Hopefully, by the time you've checked out all of these librarians, the third season of TNT's series will be right around the corner.

More like this
“The Door Is Always Open” For Another 'Breaking Bad' Spin-Off, Says AMC Boss
By El Hunt
Here's Why You'll See Less Of Olivia Rodrigo In 'HSMTMTS' Season 3
By Bustle Editors
'Succession' Season 4 Could Be The Show’s Last
By Kadin Burnett and Gabrielle Bondi
Everything To Know About The Flash Season 9
By Brad Witter
Get Even More From Bustle — Sign Up For The Newsletter