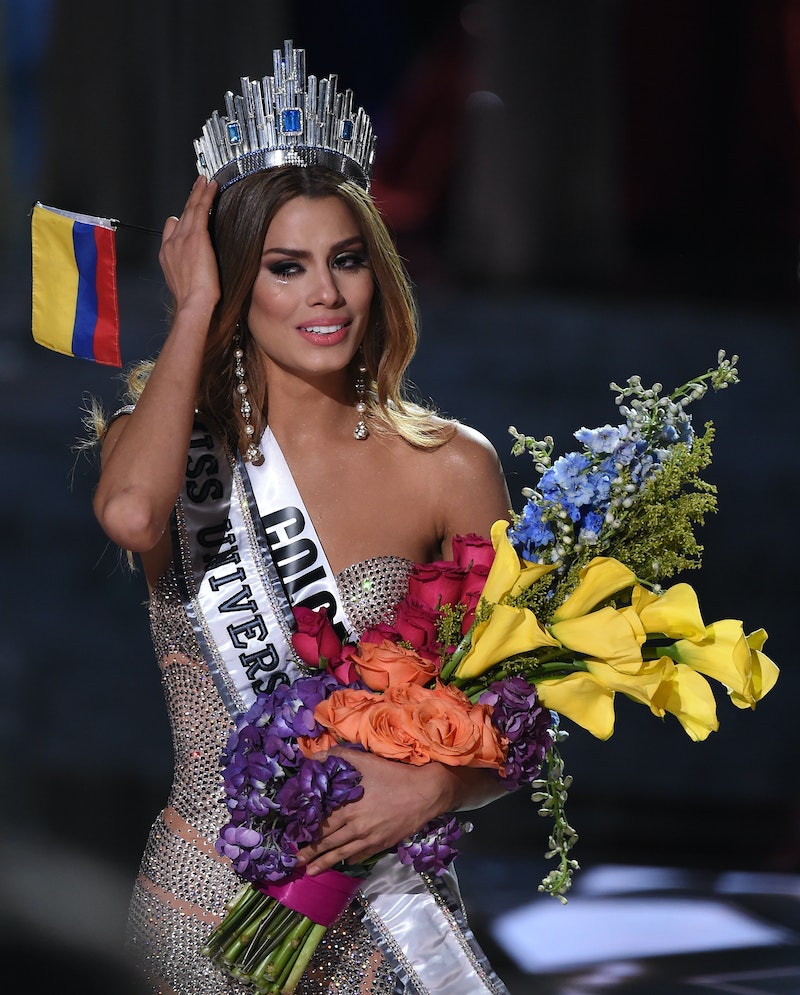 Yesterday, it was reported that in the wake of the cringe-worthy moment heard 'round the world (you know, the one where Steve Harvey announced the wrong winner at the 2015 Miss Universe pageant), that Ariadna Gutiérrez (Miss Colombia) was headed to Miami to spend the holidays with her family, away from the glare of the spotlight that was suddenly shining on her. And who could blame her? Even for a beauty queen, who is likely used to having all eyes on her, it would have to be challenging to handle the entire world waiting for you to address the huge, tiara-wearing elephant in the room. But in the age of social media and instant gratification, hiding out is hard to do, and Gutiérrez has released an official statement via Instagram that is both classy and inspiring.

Her immediate reaction to the flub was caught on camera right after the pageant ended, and she had also taken to Instagram a few times in the days after the shocking moment to share some sweet snaps for her rapidly growing fan base. But a representative from the Concurso Nacional de la Belleza de Colombia said that she wouldn't be making any statements until after her time in Miami, adding: "She wants to spend a few quiet days with her family over the holidays and unwind, and she plans on addressing the media when she goes back to Colombia." So why the official statement so soon? Likely because she knew the world was waiting to hear her side of it, and it turns out, her side of it is refreshingly sweet.

What's so great about the post is how humble and real it is — there's no air of a PR angle here, and it's refreshing. She emphasizes her Colombian roots, saying: "I was able to bring happiness to my country after becoming Miss Universe for only a couple of minutes... Today because of that COLOMBIA and the LATIN COMMUNITY are being talked about in every corner of the world."

Her statement shows that a sense of humor and grace is what makes for the best beauty queen, and even if she did only have the crown for a few minutes, that the greater good she's doing for her community will extend far beyond that time. Props to you, girl! Now enjoy your vacation — you deserve it.

More like this
Ryan Reynolds Brought Some Famous Friends To Wrexham A.F.C's Last Game Of The Season
By El Hunt
Jake Daniels Just Became The UK’s First Active Football Player To Come Out As Gay Since 1990
By Sam Ramsden
Taylor Swift, Kerry Washington & More Speak Out On Uvalde Mass Shooting
By Jake Viswanath
Rebekah Vardy & Coleen Rooney’s Trial Has Officially Begun
By Bustle UK
Get Even More From Bustle — Sign Up For The Newsletter