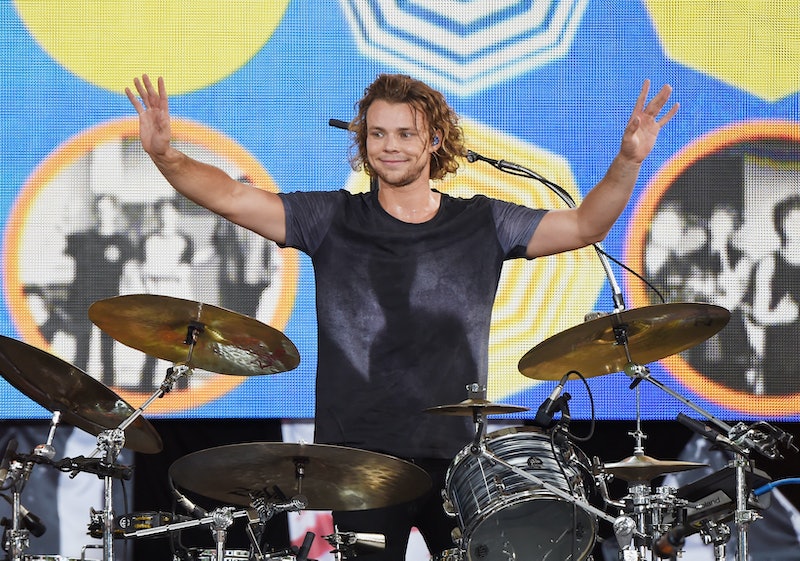 While there may be some confusion in the 5 Seconds of Summer fandom today in regards to the "#WeLoveYouAshton" hashtag, there is also one universal truth: 5SOS fans are fiercely protective and supportive of their boys — particularly when it comes to respecting their privacy. Fans immediately began trending "#WeLoveYouAshton" on Twitter Wednesday in response to an alleged message from drummer Ashton Irwin that slammed someone for leaking his mother's home address. Though the note appears to be from a fake (or at least unverified) "Ashton 'Fletcher' Irwin" on Facebook, many fans took the message at face value — especially because it coincided with a (legit) paparazzi video of Irwin yelling at the photographer to stay away from his family and to respect his privacy.

"If you have my address please delete it. It's my time to be with my family. I love you guys, but I need to be away from people for a while," the Facebook message reportedly read. "Thanks to the asshole who posted my mums address threatening the lives of my family just by doing so. Really, you are one of the lowest human being[s] I have ever met. Hope you're happy."

Though the message appears to not be real (not only is it an unverified account, but while each of the 5SOS boys have their own verified Facebook pages, the only one they still actively use is the band's page), it does tie in with a recent video of Irwin lashing out at paparazzi. "Don't come near my family, okay?" Irwin says in the clip, which you can watch below. "Do you understand? Stay away from me and my family."

The guys of 5SOS are currently in their hometown of Sydney, Australia, relaxing after weeks of Jingle Ball shows all across the U.S. — spending some much-needed R&R with their families before they embark on their 2016 Sounds Live Feels Live world tour (come at me, boys). And although fans may initially be surprised to see Irwin as anything but his usual happy-go-lucky self, they recognize that there is a serious invasion of privacy here and it needs to stop. Irwin has a point, and, as always, fans are there to back him up:

And perhaps this is the most telling message of all: