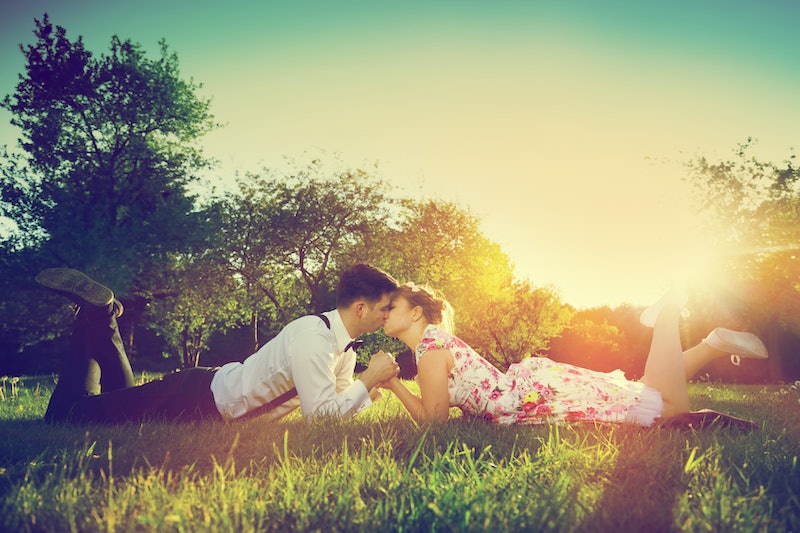 When it comes to believing in soulmates, people are pretty split. While some insist on looking for The One, others are more than happy to look for Ms. or Mr. Right Now. And some are happy being single. So, is there a certain person out there for everyone?

On a gut level, I don't understand that belief and I don't agree with it. That's just my opinion. It's not that I don't think you can love someone in an amazing, life-changing way and be with them for your entire life, although I think that's tough. I just don't buy the whole one person for everyone thing. But I'm basing that off of just anecdotal experience and what seems right to me — the proof doesn't seem to be in the pudding. But whether you agree or not on a basic level, is there any science behind it? Is there any sort of proof that shows that people have one 'soulmate' they're meant to stick with? I mean, I know some animals mate for life, so maybe it's not a stretch to extend that to humans. And then maybe that would be a sort of soulmate, maybe not in the traditional sense, but something.

1. Research Suggests That Both Monogamy And Polyamory May Be Natural For Humans

What works for one person doesn't necessarily work for another. And we all know people who love to be coupled up, and those who seem to never want to be with only one person. Everyone's different, but what's interesting scientifically is that people seem to fall very neatly into those two camps, suggesting what's 'natural' for one isn't 'natural' for the other.

Rafael Wlodarski, a physiologist at University of Oxford, explained to Livescience that only 30 percent of primates and three percent of mammals are actually monogamous. Their research of 600 British and American men and women found that "rather than it being a whole gamut of mating strategies, there seems to be two potential phenotypes within males and within females". So while maybe science suggests that mating for life works for you, but not for someone else. In other words, there is no normal.

2. But There Are Indicators That Predict If You'll Stay Together

Psychologist John Gottman is famous for his study of couples, and he has literally decades of research with thousands of couples. And at this point, he can predict with 94 percent certainty how a couple will do. If you can predict that someone will stay together with almost 100 percent accuracy, there's definitely something to that, and that those people were in some sense "meant" to be together. Oh, and the secret? Gottman says: "Much of it comes down to the spirit couples bring to the relationship. Do they bring kindness and generosity; or contempt, criticism, and hostility?" Be grateful and kind and you've got a great shot.

3. But If You Think In Terms Of Soulmates, You're Less Happy In Your Relationship

Research from the University of Toronto says that those who believe in "soulmates" actually run into far more relationship troubles, or at least handle those troubles worse. Author Spike W.S. Lee explains that if you believe in soulmates, than conflicts— which are completely natural— don't fit it into a relationship. People who focus on "The One" think a relationship "should have perfect harmony, no conflicts whatsoever... When reality proves otherwise, as it almost inevitably does, it hurts all the more.” It also makes you doubt a good relationship if it's anything less than perfect or "fate."

So when it comes to science, you can decide whether or not you think soulmates exist. But ironically looking for, and insisting on it, can actually do your relationships a lot of damage.