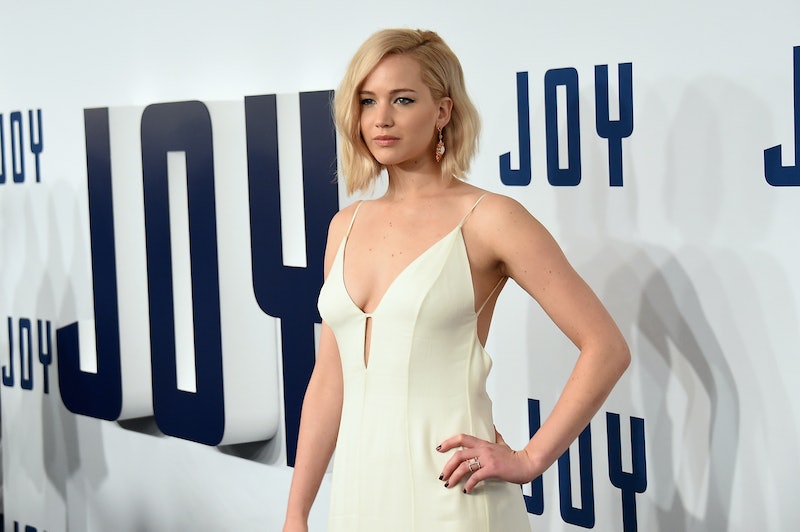 In classic Jennifer Lawrence fashion, her new film Joy is going to break barriers for women, and explore a story few have told before. While the film is inspired by the life of entrepreneur Joy Mangano, what Lawrence and director David O. Russell have explored is a much deeper concept. In an interview with Entertainment Weekly, Russell explains how Jennifer Lawrence's character is transformed into a gangster in Joy, and how powerful that transformation was.

He isn't talking about the character literally becoming a gangster — although that would be incredible — but about the mindset you have to get into to really become such a huge success in the world. "She had to become something she had never been, which was super badass. You don’t get to become a success unless you become a gangster, to some degree," Russell said of the character. In a way, he is absolutely correct. There is a level of determination, resilience, and strength that one must grasp in order to attain the levels of success Mangano did in her career.

Russell has decided to keep this portrayal as legitimate as possible, and that means not having this be one straight rags-to-riches tale, but presenting Joy as a multi-dimensional character — flaws and all. Of the final film he says, “We loved the notion that how success looks on the brochure, to most people, is like this cake, but when you really look at the inside of it, it’s got sadness, and it also has tremendous challenges that never end.” Truer words have never been spoken. In the midst of the greatest success, there are still moments of frustration present, and it will be a welcomed refresher to remember success doesn't always come in a straight line.

Russell has said that him and Lawrence collaborated on the different themes that will tie into the film, and how Joy — both the woman and the emotion — is seen throughout one's life. It's easy to seek joy in the easy moments, but this film is sure to have its fair share of setbacks and downturns. Not that sadness should be celebrated, but it is always a beauty to behold when life is represented on the big screen for all that it is — messy and joyful.