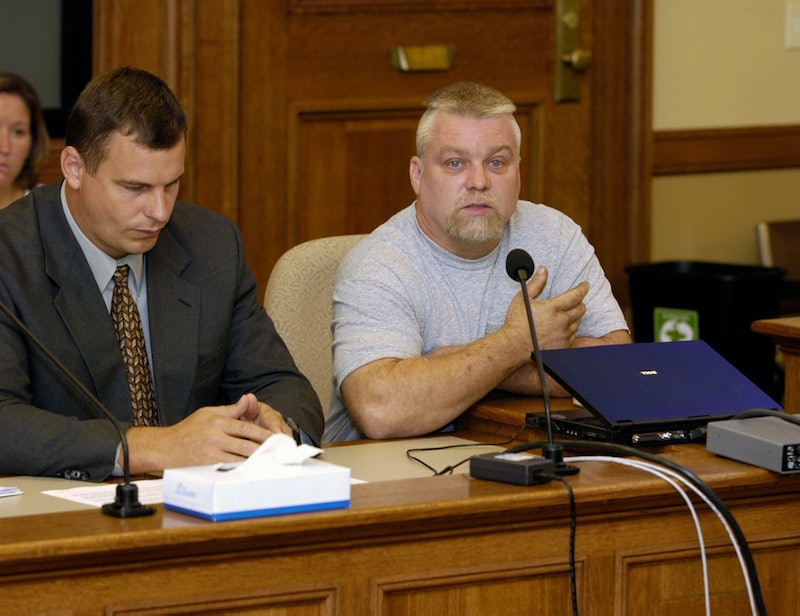 First it was Serial. Then it was The Jinx. Now it's Making a Murderer. America is once again in the grip of a fascinating true crime story — this time courtesy of Netflix's docuseries about the case of Steven Avery, who was convicted of murdering Teresa Halbach in 2005. Making a Murderer tackles the thorny question of Avery's guilt or innocence, citing concerns over possible corruption within the Manitowoc County legal system. These concerns have raised the ire of many viewers, some of whom have been expressing the desire to help Avery. Could that desire pay off? Will Steven Avery get parole?

Unfortunately for Avery, the answer is pretty clear: no. When the jury found him guilty of murdering Halbach and illegally possessing a firearm, he was sentenced to life in prison without the possibility of parole. That means that there are no conditions under which Avery will be released from Wisconsin's Waupun Correctional Institution, barring a complete overturn of his verdict. Remember, convicted felons who are granted the possibility of parole still only actually receive it under certain conditions, which include good behavior, a permanent residence, and gainful employment — and even then, they have to submit a petition for release.

So no matter how well Avery behaves, no matter how much remorse he shows, and no matter how many Twitter users tweet their anger and support, he won't be handed a "Get Out Of Jail Free" card any time soon. But, as bleak as things are for Avery, that doesn't mean that his case is entirely hopeless. Michael Peterson (convicted in 2003 of murdering his wife Kathleen) and Adnan Syed (convicted in 2000 of murdering his ex-girlfriend Hae Min Lee), both of whom had popular Peabody-Award-winning true crime series produced about them (the miniseries The Staircase and the podcast Serial, respectively), have both been granted second chances; Peterson with a retrial, and Syed with an appeal.

There's a chance that something similar could happen for Avery after all of the attention that Making a Murderer has garnered him. In 2011, a petition for retrial filed on Avery's behalf was denied by the Wisconsin state court. But that was before the Netflix series made him a household name. It's possible that, were he to petition again now, the nationwide attention on his case would put pressure on the state to at least give him another day in court. If he were granted a retrial, then he would likely be released from prison while awaiting his new trial, just as Peterson is currently free while awaiting his own retrial. (Even Peterson's house arrest and electronic monitoring were lifted last year, allowing him to travel freely through North Carolina, although he still must ask for permission to leave the state.)

The year after Avery received his verdict, his nephew Brendan Dassey was charged with being a party to first-degree intentional homicide, mutilation of a corpse, and first-degree sexual assault. Dassey also received a life sentence on these charges, although his came with the possibility of parole — after 41 years. The earliest Dassey will be able to submit a petition for release is on Nov. 1, 2048, when he will be 59.