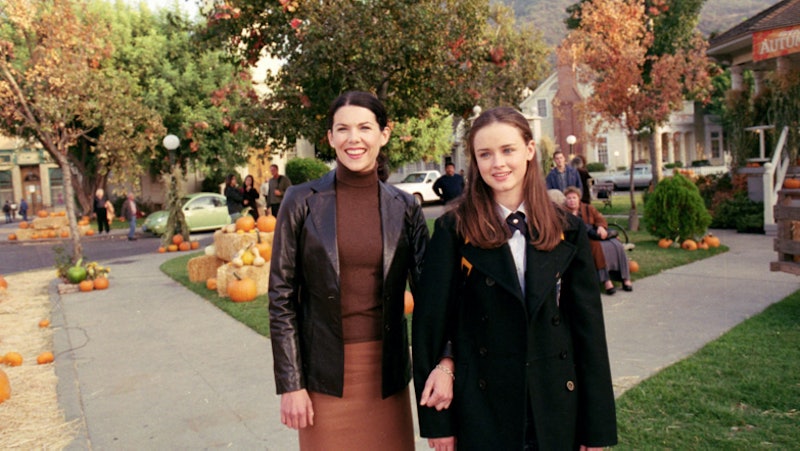 Let me put this out there: I am a Gilmore Girls superfan. I've watched the entirety of the show multiple times through and know it inside out. I've gotten to the point where I know exactly what Gilmore Girls episode can complement my exact moods and what Gilmore Girls quotes I can whip out at family gatherings as a snappy comeback to silly questions about my personal life (in true Lorelai Gilmore form, my mom gets every single one).

Recently I've also become insanely addicted to the Gilmore Guys podcast (two dudes expressing their love for my favorite show? Winner), and if there's one thing that two fellas scrutinizing every seemingly small moment of a show you think you know better than anyone can do for you, it's that they make you realize minute flaws that you never knew existed. I'm talking plot holes, people! And Gilmore Girls has a whole bunch of them.

The discussion of plot holes on the Gilmore Guys podcast has sent my brain into an over-thinking spiral of epiphanies. Just why were so many actors playing multiple roles? And why is it that certain characters completely contradict their own facts in later episodes? To gain some sense of sanity, I've handily collected a selection of some of Gilmore Girls biggest plot holes and have assembled them below. Prepare to have your minds blown.

1. Lane Mentions Her Parents In Plural, But Where Is Lane's Dad?

Seriously, she never just says "Oh, my Mom would hate that..." but "My parents would hate that." Lane's Dad never makes a physical appearance in the show and nobody ever asks where he is. He is the Carmen Sandiego of Stars Hollow except no-one seems to be singing his name in a similar theme song, if you catch my drift.

2. Grandmother Gilmore Is Referred To As Being Dead, But Then Shows Up Episodes Later

In Episode 3 of the first season, Lorelai "Trix" Gilmore is talked about by Richard and Emily which basically implies that she's no longer living. Yet, lo and behold — a miracle! Trix actually turns up 15 episodes later, alive and well and driving Emily crazy.

Kirk of all trades (master of none), first appeared in Episode 2 of the first season as a DSL installer called Mick, while in Episode 3 he becomes a character credited as "Swan Guy" (he delivers swans to The Independence Inn), but by the time Episode 5 rolls around he becomes the Kirk that we know and love (and he remains to go through dozens of job roles for the remainder of the show).

4. Dean Talks About Owning A Motorcycle (Which We Never See)

In Episode 15 of Season 1, Dean mentions that he owns a Suzuki motorcycle. It must be purely for show back home in his garage or something because we never see him riding it once.

In early episodes of the show, Rory stares at photobooth photos of a young Lorelai and Christopher. I don't know who that guy might be (imposter!), but it definitely isn't the man who is introduced as Rory's dad episodes later.

6. Michel Is The Worst Staff Member Ever But Never Loses His Job

For a second, just imagine that you turn up to your day job every day, snarling at customers, being rude to staff, sarcastic to your manager and flat out refusing to do your job and complaining about it loudly every second that you have the chance. This is Michel — owner of the Worst Employee Ever gold medal, who was never fired and even more unbelievably was invited to become a partner in Sookie and Lorelai's own Inn business. I don't know about you, but I've never had such good luck.

OK, so Fenn is a pretty iconic actress (Audrey Horne! Twin Peaks!), and even if you've never seen any of her work before, she still has the sort of spectacular face that you don't forget in a hurry. Somehow she plays the girlfriend of Jess's Dad in Season 3 and then also plays Anna Nardini (April's Mom) in Season 6. Did nobody think that we'd notice? I'm onto you, Gilmore Girls.

8. Max Medina Proposes Marriage To Lorelai Via 1,000 Daisies (But There Are Clearly Way More)

Just rewatch the episode (and the one following it where the daisies are distributed amongst the town) and see for yourself. There are thousands. I guess it might be because a 1,000 of anything never looks as much as you ever imagine, which is why briefcases full of money in movies often contain way more than the actual sum. Because otherwise you'd just be seeing a couple of measly stacks of notes.

Listen, miraculous metabolisms definitely exist in the real world, but Rory and Lorelai take it to a new level. Not only do they have the purest skin known to television but they also don't suffer the same tummy bloat that the rest of us do following four Thanksgiving Dinners in one day (can't say I've had the pleasure, though!) or the sort of spot outbreak that unleashes itself following a steady evening of fried food and sugar.

10. Rory & Lorelai Have A Limited Budget But Can Still Afford Endless Take-Out And Great Clothes

Seriously, in one episode Rory is wearing a set of Paul Frank pajamas (let me tell you, these were expensive back in the day --- especially for sleepwear) and it seems like Lorelai rarely wears the same outfit twice (or ever, come to think of it?). Their inability (or refusal) to cook also means that they get take-out most nights of the week (and live off leftovers for the rest). They're also apparently supposed to be almost broke, which I can confirm for you right now does not result in giant pizzas or Chinese banquets on a Tuesday night.

11. Lorelai Never Pays For Her Food Or Coffee At Luke's Diner

Maybe Luke was just being charitable to them on account of them being great buddies and of him being hopelessly in love with Lorelai , but still: the Gilmores never once exchange money in return for food (although I seem to remember Lorelai waving a bill at Luke once in the hopes of getting coffee. Whether that bill ended up Luke's cash till remains to be seen...)

12. Lots Of Food Gets Ordered And Quickly Abandoned

Lorelai and Rory are busy people, we get it. But there are so many occasions where they both order a gigantic feast, eat a couple of bites and then jump up and leave with great urgency. I don't know about you, but when there are pancakes in front of me, schedule be damned, because those bad boys are getting demolished.

13. Why Doesn't Lane's Mom Wonder Where Her Pocket Money Is Being Spent?

Let's face facts: Mrs. Kim is not the sort of Mom who would give pocket money without wanting to know exactly where every last penny of it was spent (and with proof, no doubt!). Before her Mom was privy to her love of rock, Lane was either forging some very elaborate store receipts to please her Mother or there were some very sketchy plot holes happening surrounding her secret stash of band t-shirts and music.

14. Lane's Date Wears A T-Shirt By A Band Who Notoriously Didn't Make T-Shirts

In Episode 12 of Season 1, Lane joins Dean and Rory (and some other dude called Todd) for a disastrously awkward double date. Todd is apparently wearing a t-shirt from the band Fugazi, which Lane attempts to strike up some conversation about. Except, Fugazi were actually a hardcore punk band who were notoriously against selling band t-shirts. Maybe he bought one of the many bootlegged ones which did the rounds back in the day? But if so, where in Stars Hollow did he manage to find it?

And there we have it! I don't know about you, but the plot holes and inconsistencies in Gilmore Girls only seem to add to the charm of the show. Well, for me anyway. Gilmore Girls forever.