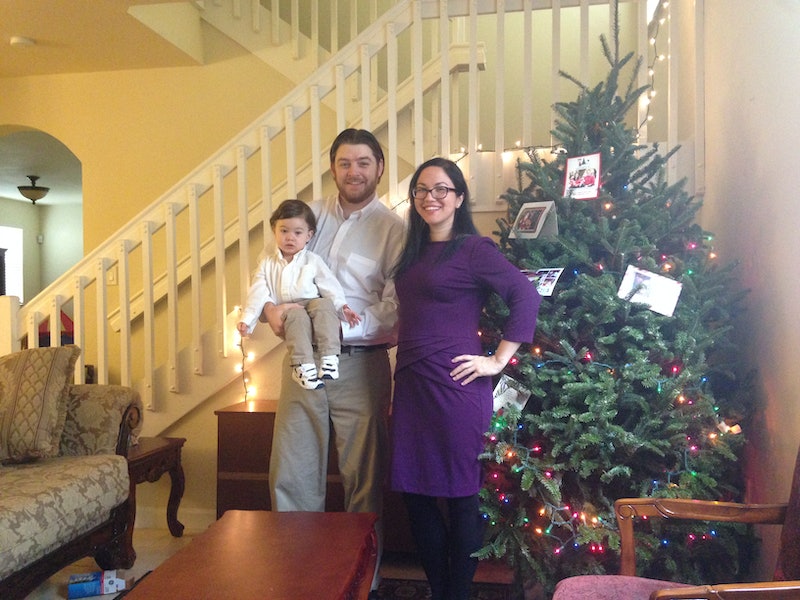 While families across the country may be setting out cookies and milk for Santa, watching It’s A Wonderful Life, or reading their copy of T’was The Night Before Christmas or The Polar Express on Thursday night, Latinxs everywhere will be gathering with their families for the biggest party of the year. It’s called Noche Buena and it eclipses the hell out of Thanksgiving and New Year’s combined — and it’s the main reason why Latinxs think Christmas Eve is even better than the actual day.

Noche Buena literally translates to “the good night” or “holy night,” and it’s a time for family, friends, and food galore. Except it’s not just that — because many Latinx families also play games, dance, and even open gifts on this night. Noche Buena parties usually happen at the current matriarch (or patriach)'s house, and it’s there that every tio and tia (aunt and uncle), abuelo y abuela (grandparents), primo (cousin) and fulanito de tal (so-and-so) gather, dressed in their best outfits, to essentially celebrate the birth of Jesus. Of course, the religious aspect of the holiday isn’t always necessary. As a devout non-believer, I’ve gladly attended Noche Buena festivities my entire life and enjoy them in a pretty secular fashion, since the focus of the night is really the people and the meal they’ve gathered for.

Depending on your and/or your family’s nationality/background, your Noche Buena experience might vary a bit. For example, it’s almost guaranteed that if you attend a Cuban or Puerto Rican Noche Buena, you’ll find yourself face to face with a lechón — that is, a rather large and often frightening-looking roast pig, with face, feet, and everything else in tact, that is traditionally prepared inside something called a caja China. And FYI, the pig is usually slaughtered just a few hours or days prior to getting cooked, often picked out from several other pigs at local farms.

I attended an ex-boyfriend’s Cuban Noche Buena once and although it was a total blast, as a vegetarian, it was almost impossible to find anything to eat. Plus, I was a little freaked out by the giant pig staring back at me from the corner of the backyard (because in Miami, we can totally celebrate the holidays outdoors without the threat of pneumonia or frostbite). A traditional feast at a Cuban Noche Buena also includes things like rice and beans (these are not quite vegetarian-friendly, as they are often cooked with pork fat), yucca with mojo (if you’ve ever been to a Pollo Tropical, you know that’s that bomb-diggitiy garlic sauce), and mojitos (because rum keeps you smiling even when relatives say awkward things).

But if you’re attending Noche Buena in a Mexican household, you might find yourself enjoying homemade tamales and pozole (a hominy stew), with flan or bunelos (a type of sweet bread) for dessert, and maybe even a little tequila. Colombian Noche Buena dinners might include ajiaco Bogotano (a type of potato soup) and natilla (a dessert made from cornstarch and milk that’s way more delicious than it sounds), while Venezuelans enjoy pernil (pork leg) and panettone (a sweet bread loaf) as their traditional Noche Buena treats. Noche Buena is even celebrated in the Philipines, where folks indulge in everything from hamonado (pineapple juice-infused chicken or pork) to sotanghon soup (a type of hot noodle soup), plus tsokolate (hot chocolate) to end the meal.

For many Catholics of various nationalities, dinner is often either preceded by or followed by a trip to church for la Misa de Gallo, or the midnight mass. In many Latin American countries, playing dominos, lighting fireworks, and releasing paper lanterns into the sky are also fun traditions for the evening. And once the coquito (a drink made of condensed milk and rum) is flowing, you’ll probably end up dancing along to "Mi Burrito Sabanero" or Jose Feliciano’s "Feliz Navidad," just some of the many songs you’re bound to hear at least once at a Noche Buena party.

Being of mainly Nicaraguan descent myself, our Noche Buena dinners usually consisted of gallina rellena (stuffed chicken), plus gallo pinto (Nicaraguan style rice and beans), nacatamales (pork-filled corn tamales), and my grandmother’s one-of-a-kind potato salad, among other things. We frequently went to Noche Buena at her house while I was a child, and I have fond memories of playing with my cousins while we hid from the adults and watched Nickelodeon in my aunt’s room (because it was the '90s and Nickelodeon was in its prime back then). The adults usually spent their time drinking, eating, and chatting in the living room and kitchen, occasionally checking in on us to make sure we hadn’t gotten too destructive.

Other years, we had much simpler Noche Buena festivities right at home. I’d spend Christmas Eve helping my mom in the kitchen with simpler tasks like arranging salads, then setting the table with pretty white and red table cloths and lighting long, red candles that we always put in my mom’s special reindeer candlesticks (which only ever came out for Noche Buena). Occasionally, I’d sneak away to the Christmas tree to try and get a peek at my gifts. The house was always filled with music in those days, with everyone from Villancios and Eydie Gorme y Los Pancho to Crystal Gayle playing holiday tunes in Spanish and English.

As the tradition went for us, we’d gather, eat, and at midnight, wish each other a merry Christmas. I’d rush to the tree to uncover the Baby Jesus (who was more than likely hiding underneath the tree skirt since he hadn’t been “born” yet) and add him to the rest of the nativity set. We’d usually be allowed to open at least one gift (usually from one of my aunts), and then finally settle down to sleep. Speaking with many of my Latinx friends, it seems this is becoming more the norm as we move away from a solely Latinx holiday (where all gifts are opened on Christmas Eve) toward one that incorporates elements of Latinx and American traditions.

As a first-generation American, I’m excited to pass on the Noche Buena tradition with my son (although I think I might also want to start incorporating Iceland’s Christmas Eve book-giving tradition, too, because that’s just freaking cool). He’s only half-Latino (as my husband is white), and I want him to know and understand how special Christmas Eve is. We’ll be celebrating Noche Buena this year at my cousin’s house, and it’s sure to be a blast with this new generation of cousins ages four and under running all over the place, slowly learning what Navidad is all about.