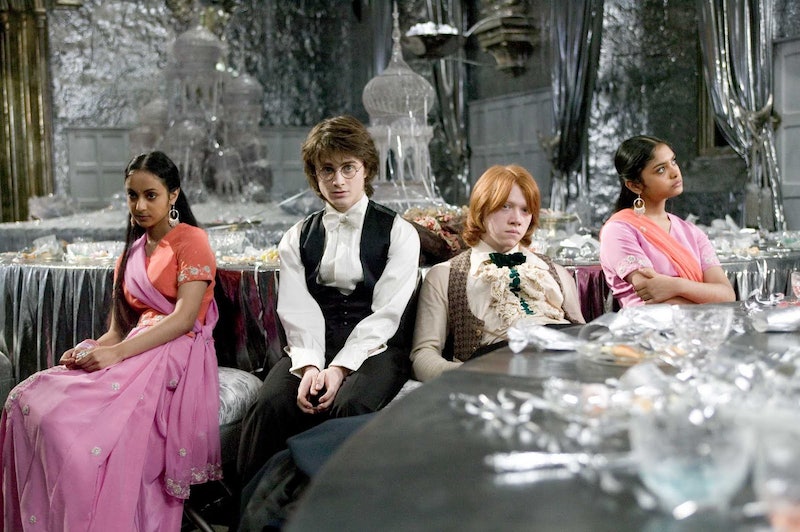 I still remember the day I first read Harry Potter and the Goblet of Fire. I only took me the day to read that door stopper of a book, and I spent most of it on the back of a golf cart. I can safely say with 100 percent certainty that this particular book is my absolute favorite book in the Harry Potter series, and for the most part I consider it to be a terrifically underrated entry. Sure, most people, if pressed to list a favorite, will always inevitably say Harry Potter and the Prisoner of Azkaban, but I beg to differ.

This isn't to say that it's not OK to have your own favorite of the series; that's a choice about as personal as what one's Patronus would be (for the record, mine would be a raccoon). However, for those on the fence about choosing a favorite, allow me to sway you. I've compiled eight reasons as to why Harry Potter and the Goblet of Fire is the most underrated book in the entire series. Take a gander, see what you think, and definitely make sure you don't cross the age line unless you're old enough, you don't want to sprout a beard like Fred and George, do you?

1. The Quidditch World Cup Gives Us a Glimpse into the Wizarding World

After three books of Harry having an incredibly dreary summer at the Dursleys, year four starts with an exciting bang at the Quidditch World Cup. Not only are we given an exciting game between Bulgaria and Ireland and introduced to future Tri-Wizard Tournament champion Viktor Krum, but we're given an exciting look into the wizarding world. Awesome souvenirs, tents that are bigger on the inside, and tiny toy brooms that really fly? At this point in the series we've only been introduced to a small handful of places in the wizarding world: Diagon Alley, Knockturn Alley, Hogsmeade, and of course Hogwarts. This paves the way for us to see more and more, and the event makes it all the more exciting.

2. It's Set During the One Year Harry Didn't Want Any Trouble

Ever since Harry set foot in Hogwarts, he's been looking for trouble. If he wasn't trying to find the Sorcerer's Stone, he was closing the Chamber of Secrets, or trying to either hide from or help Sirius Black. Finally, at the beginning of his fourth year, Harry has decided just to take it easy this time, perhaps crush a little bit on Cho Chang and dance at bit at the Yule Ball, but otherwise take a backseat and enjoy the Tri-Wizard tournament. I personally find his desire for a normal school year remarkably humanizing, and it's never failed to make me like Harry even more as a character. This is pre-capslock Harry, right before he is thrown headlong into the very real war against Voldemort.

3. Harry Gets to Fight a Dragon and That Is Awesome

We all knew from book one that Harry was a hero, but there's something to be said about a person who can defeat a dragon. Dragons are always exciting (could you imagine Dany Targaryen without her dragons?), and the smart way that Harry gets around the Hungarian Horntail is totally awesome. Plus, how cool is the little model? Another awesome thing about Harry's fight against the dragon is that technically it's all pure fun. Sure, Harry was entered into the tournament as part of an elaborate ruse to kill him, but there's something about the competition itself that just screams fun.

4. The Yule Ball Is Basically the Prom We All Wish We Had

Do you remember the last truly fancy dance you went to? Perhaps it was a prom, or a college formal, or your friends are just incredibly fancy people who can afford to throw elaborate parties, but there was a special kind of excitement that comes when you dress up nice and dance the night away. Now, imagine a kind of fancy party where everything is magic, literal fairies serve as the lighting, and an incredibly popular band is there to play for you. All I am saying is that the Yule Ball is living the dream.

5. Hermione Finally Gets the Attention She Deserves

Let's all face it: Hermione Granger is an absolute treasure. She's smart, awesome, determined, and practically carried Harry through his first several challenges at Hogwarts. Yet, she never seemed to get much respect from her peers during her first few years of school. Who can forget the fact that before the Golden Trio became the Golden Trio, Hermione was driven to tears by the callous words of Harry and Ron? How about the fact that Lavender Brown and Parvati Patil seem to think that she's a total nerd? Even Snape gets in a few punches now and then. However, all of that gets thrown out the window during the Yule Ball, when Hermione makes a grand entrance on the arm of celebrity Quidditch player Viktor Krum, dressed to the nines and looking fabulous. While we all know that Hermione is the best witch around, imagine how awesome she must have felt that night.

6. Mad Eye Moody Is Pretty Awesome (Even Though He Is Evil)

OK, I'll be honest and say that both Mad-Eye Moodys are pretty awesome, even if one of them is a Death Eater. Moody's introduction not only gives us a really awesome backstory, but also introduces us to the concept of an Auror, or dark wizard hunter. The real Alastor seemed like an incredibly cool character, and that was confirmed in later books, but the real star is the Fake Moody, aka Barty Crouch Jr. Not only did he do awesome things like turn Draco Malfoy into a ferret for being a jerk, but he also refused to treat his class with kid gloves. Students were introduced to the unforgivable curses with complete bravery, and what's more, it seemed as though he really knew how to nurture the inner talents of his students. Sure, it was all part of an elaborate ruse to kill Harry Potter and bring the Dark Lord back into power, but good ole Barty Crouch Jr. definitely should have considered teaching if he never got into the whole Death Eater thing.

7. Other Wizard Schools Are Introduced (And So Is a World of Magical Possibility)

Of course Hogwarts isn't the only school of witchcraft and wizardry in the world, but it never occurred to me as a reader to learn about them. Luckily, in Harry Potter and the Goblet of Fire we are introduced to not one international school of magic, but two. Beauxbatons and Durmstrang both carry their own magical mysteries, and we woefully don't get much of a look into what the school grounds look like, but we learn enough that they are rather different from Hogwarts. What does this mean for the world at large? It means that magic is a different, evolving thing. Imagine a wizarding school in Asia, Australia, Africa or America? With Fantastic Beasts and Where to Find Them hitting theaters soon, we're going to catch a glimpse of the American wizarding school, but the excitement I felt when I first realized that wizard schools existed outside of England still can't be matched.

8. It Marks the Beginning of the Darkness that Overtakes the Series

For all the fun and games that permeate Harry Potter and the Goblet of Fire, this definitely marked the beginning of the darkness that would soon overtake the series. For the first three books, everything seemed wrapped up and brought back to square one: Voldemort was still out there, Harry still had to go back to the Dursleys, and everything would reset for the beginning of the coming year. By the end of this book, people are dead, Voldemort is back, and one of the few protections that Harry had is gone. Sure, there are still happy moments in the books to come, but the heaviness grows with the page count.

More like this
16 Novels That Paint A Realistic Portrait Of Abortion
By K.W. Colyard
Neil Patrick Harris Will Play 'Doctor Who's “Greatest Enemy” Yet
By El Hunt
Everything To Know About 'The Hunger Games' Prequel Movie
By Grace Wehniainen and Radhika Menon
Everything To Know About 'Scream 6'
By Jack Irvin and Jake Viswanath
Get Even More From Bustle — Sign Up For The Newsletter