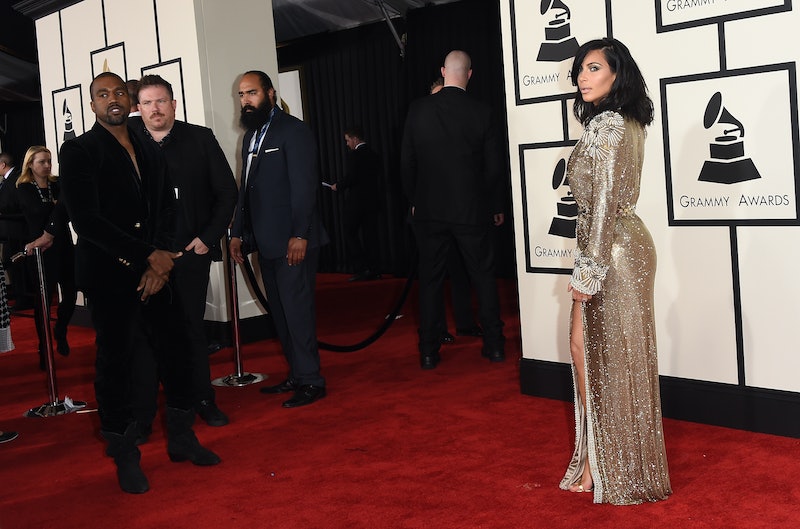 It's been a big year for this Kardashian. Between fierce maternity looks and creating a personalized website, she truly cemented her place in celeb history. Taking a look back at her style this year, Kim Kardashian choose her favorite red carpet looks of 2015 on her blog, and her picks had one great theme — body positivity.

Out of hundreds of her countless outfits from the past 12 months, Kardashian narrowed her favorite red carpet moments of 2015 down to just six looks. From her barely there dresses to her gorgeous and bold maternity style, these looks all all have one thing in common — they're all about accepting herself as is. Whether she meant to send a message or not, Kim K was into celebrating her body in 2015. From showing off her best ASSets (sorry, I had to) to highlighting her curves, each one of the six outfits is completely different than the last.

Kardashian gets a bad rep for some of her sartorial choices, but ultimately, the woman knows a thing or two about loving herself. You can say what you'd like about the star's selfie book and Kimoji app, but you can't deny she's got plenty of love for herself — and that's a great thing.

Honestly, some of Kardashian's picks for this list surprised me. Despite her habit of wearing the same thing in slightly different variations over and over, each of the six looks are completely different from one another, showing just how versatile the reality star's style has been throughout the year. Take a look at her choices to see if your favorite Kardashian moment made the cut.

She looked fierce in the Jean Paul Gaultier gown. Not only was she not afraid to show a little skin, but she went for a completely unconventional cut.

Kardashian even showed off some natural makeup for a change.

There was also this adorable lovey-dovey moment between her and Kanye.

I completely forgot about this look until I saw it on Kardashian's site. She wore the Balmain gown to the BET Awards in January. It was one of her most covered-up looks yet, but she completely rocked her curves.

I love that she threw a simple dress in there that complimented her figure. She wore the Sophie Thealett gown with her hair back and natural makeup for an elegant look.

Wearing her hair back was the perfect touch.

Oh, and this also happened at the event.

It wouldn't be a Kardashian round-up without a completely sheer look on the list. She rocked the Peter Dundas for Roberto Cavalli dress with confidence as her best accessory.

She was really feeling herself on this night, which made her edgy gown look fantastic.

And who could forget that train?

This sheer Proenza Schouler number was the second nearly nude look on her list. She showed off her curves while looking fierce at the CFDA Awards

Her slicked back hair matched her outfit perfectly.

According to E! Online, the dress caught fire after the show, but that apparently didn't stop her from remembering it fondly.

She rocked this simple Valentino gown wish ease at the InStyle Awards.

I was super happy to see that one of her maternity moments made the list.

Clearly she loves her body throughout all its changes.