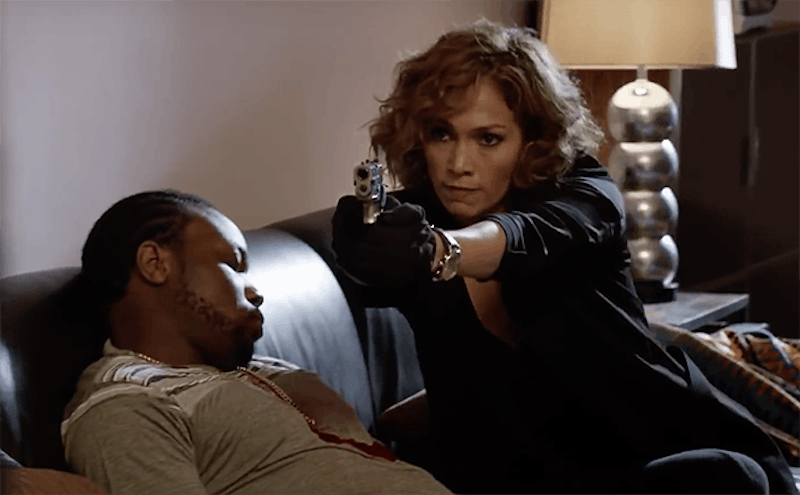 TV wasn't afraid to show off its feminism in 2015, and it was all the better for it. From the morally complex women of Jessica Jones and How to Get Away with Murder to the irrepressible nature of Unbreakable Kimmy Schmidt and the intersectional masterpiece that was Master of None, 2015's crop of shows were undoubtedly progressive. Unafraid to take on topics of discrimination, race, life after sexual assault, aging, and so much more, the female characters who dominated the TV screen this year were varied and more realistic than ever before. Now it is up to 2016 to keep the amazing, feminist shows coming.

I have a feeling that won't be a problem. With web series maven Issa Rae coming to HBO, a new Shonda Rhimes series heading to ABC, and Jennifer Lopez set to leave her mark on the police drama genre, 2016's new shows are looking promising. Time will tell if these series can stand alongside the likes of Crazy Ex-Girlfriend and Supergirl, but with so many shows emphasizing diversity, women from all walks of life, and the importance of female voices behind the camera, I am hopeful 2016 will be another year of progress for feminism on TV.

There's no trailer for Issa Rae's Insecure yet, but I don't need one to know Rae's series about the friendship between two modern black women (Rae and Yvonne Orji) is going to be a monster hit. The comedian's web series The Misadventures Of Awkward Black Girl fearlessly took on stereotyping and awkwardness in the workplace while also offering unfiltered insights from Rae. Insecure's 2016 premiere date is still to be decided, but it is at the very top of my must watch list.

Jennifer Lopez takes on the role of a corrupt cop in NBC's new drama where moral ambiguity reigns supreme. Lopez's character is caught between loyalty to her boss and complying with the FBI's demands for the sake of her daughter. Female antiheroes are still a rarity, so to see Lopez take on such a complex character is exciting. Shades of Blue premieres Jan. 7.

Your next Shonda Rhimes' addiction is The Catch. The series stars the insanely talented Mireille Enos as the best private investigator in Los Angeles who can't see the con taking place in her own home. When her scamming fiancé (Peter Krause) takes everything she has, Enos' character sets out on a mission to bring him to his knees. Sounds badass, right? The Catch premieres Mar. 24.

This high fantasy series has three prominent leads, and two of the three are young women tasked with saving the world. That doesn't automatically give the series feminist street cred, but it's a promising starting point. The fact that they not only have agency in the trailer, but are instrumental in the mission to restore order to their world has me beyond psyched for The Shannara Chronicles (premiering Jan. 5).

Rashida Jones is finally in the spotlight in the satirical Angie Tribeca. The comedy is poised to skewer every cop genre trope you can imagine, and Jones is leading the charge with flawless line deliveries of ultra-serious/hilarious dialogue. Jones' Angie will challenge everything you know and love about procedurals while also making you laugh your butt off. The entire first season is set to air on Jan. 17.

I don't know what has gotten into TBS, but they are bringing their feminist A-game in 2016 (this isn't even their last show on the list). Search Party is a dark comedy starring Alia Shawkat as an aimless young woman who becomes obsessed with the disappearance of a girl she barely knew in college. The series' themes of dissatisfaction and self discovery look exquisitely drawn and any show smart enough to have Shawkat as its lead deserves a closer look. The series is set for 2016, but the official premiere date hasn't been announced.

A woman rising through the political ranks suddenly has her missing son reappear in her life (maybe), and uses his return to boost her chances of becoming governor. Add in a female detective who is far too close to the case and a journalist who is digging into the too good to be true story, and The Family appears to be a story where women in powerful, male-dominated professions all become ensnared in a dark mystery. That is a show I want to see. The Family premieres Mar. 3.

WGN America's new series about the Underground Railroad is dramatizing the most brutal part of America's past. The show is dealing with tricky subject matter, but it has a strong cast and it is putting an emphasis on the struggles (and triumphs) of black women in the era. A project this ambitious could end up being amazing or completely miss the mark, but I'm pulling for Underground to work. Underground premieres Mar. 9.

Maddie is a teenager with substance abuse issues who can't admit to herself that she has a problem. The first three episodes of this remarkable drama are on Hulu, and I have to say Maddie is an absolutely brilliant and frustrating protagonist, and her journey toward sobriety is enthralling. Recovery Road will premiere on Freeform (formerly ABC Family) Jan. 27.

Samantha Bee is getting her own talk show. This news automatically makes the world a better place. It starts February 2016.

Comedy Central is giving Broad City a worthy companion in The Idiotsitter, a raucous comedy about a rich heiress under house arrest and the woman who gets roped into babysitting her. The "anything goes" comedy looks poised to be a breakout hit. Idiotsitter premieres Jan. 14.

Believe it or not, that's just a few of the potentially awesomely feminist shows coming to TV in 2016. I have a feeling this is going to be another amazing year for women on TV.

More like this
Julie Andrews Revealed A Surprising Behind-The-Scenes 'Bridgerton' Detail
By Grace Wehniainen
The 'Hocus Pocus' Sequel Finally Has A Release Date & It Makes Total Sense
By Shannon Barbour and Radhika Menon
Adele’s All-Female Lineup Includes Kacey Musgraves, Mahalia, & Self Esteem
By Shahed Ezaydi
'The Undeclared War' Spotlights The Real-Life Threat Of Cyber Attacks
By Maxine Harrison
Get Even More From Bustle — Sign Up For The Newsletter