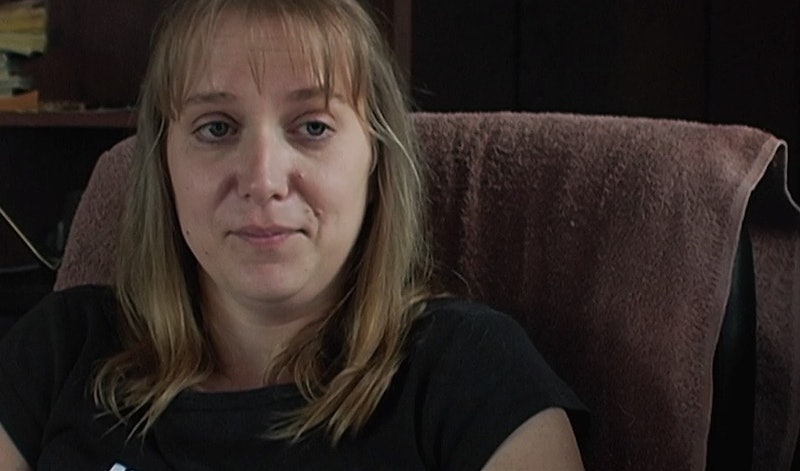 If you've been watching Netflix's addictive new docuseries Making a Murderer, you're probably familiar with the complex homicide case that resulted in murder convictions for Steven Avery and his teenage nephew, Brendan Dassey. Although Avery's then-girlfriend, Jodi Stachowski, was behind bars herself at the time of Teresa Halbach's death, she spoke to him twice on the day of the murder. She called him at around 5:30 p.m. and 9:30 p.m. on Oct. 31, 2005, and each call lasted approximately 15 minutes. Since the calls originated from a prison, they were recorded, and we hear them played in the series. Armchair detectives have listened for clues. For instance, did Avery's demeanor fit with that of someone who had just committed a murder? Like pretty much everything else in the documentary, it's a topic of debate among viewers. What's not up for debate, though, is that the couple is no longer together. We see them break up in the series, but where is Avery's ex-girlfriend Jodi now?

According to what appears to be Stachowski's Facebook page (based off her friendship with Avery's ex-fiancee Sandy Greenman, and photos that reflect her likeness posted prior to the series' release), she now resides in Appleton, Wisconsin — about 45 miles from Manitowoc. Her profile also indicates that she's currently single and is a big fan of a variety of musicians and TV shows. Stachowski has not made a statement about Making a Murderer or the renewed interest in her ex-boyfriend's case. However, records on the Wisconsin Court System's website show that she's had ongoing legal troubles of her own — ranging from DWIs to disorderly conduct. Her criminal record dates back to 1997.

According to those records, in April 2007, she was found guilty of using worthless checks — and since it happened in Waushara County, it appears that she moved away from Manitowoc shortly after her release from prison in March 2006, after her fifth offense of driving under the influence. This lines up with the documentary's timeline, which shows that she eventually left the town in order to obey her parole officer's demands that she stop keeping in contact with Avery. Those same court records also show that in December 2007, Stachowski was found guilty of disorderly conduct — a Class B misdemeanor. She was arrested three times in 2009 (also in Waushara County). One of the charges was dropped as part of a plea agreement, and the other two were for bail-jumping and driving while her license was revoked.

After that period of multiple arrests, Stachowski stayed out of trouble until 2015. She also must have relocated to Appleton during that time, because her most recent offense is the only one that occurred in Outagamie County (where Appleton is located). In April, she was found guilty of operating while suspended — which isn't a criminal charge, and resulted in a fine.

Since Stachowski chose to move away from the Manitowoc community after Avery's arrest and she's dealing with her own set of problems, it's really not surprising that she's thus far distanced herself from Making a Murderer and all the renewed media attention.