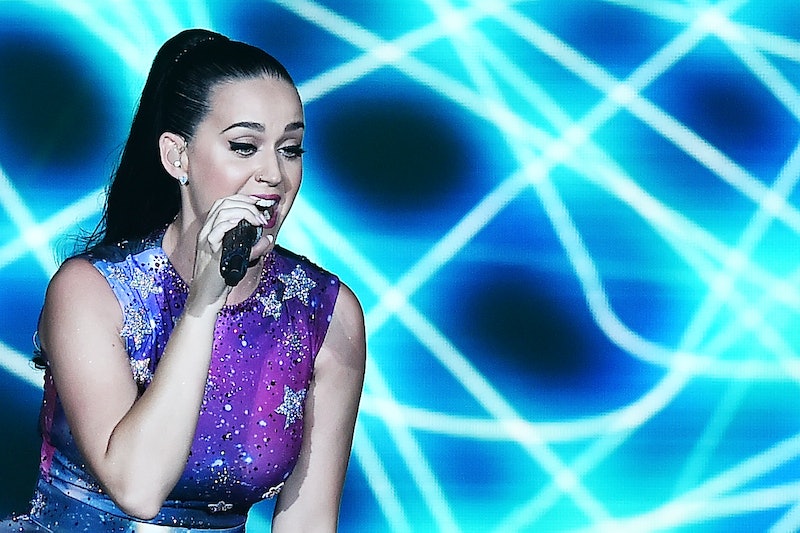 Early in December, burn victim Safyre Terry, captured the worlds' hearts when she asked for Christmas cards to fill up her Christmas tree. The 8-year-old had survived a tragic apartment fire in 2013, which killed her father and three siblings, and she was left with burns on over 75 percent of her body. After receiving more than 500,000 cards, Terry was surprised when Katy Perry sent her a Christmas care package, which undoubtedly made the young girl's Christmas, and also solidified Perry's status as one of the sweetest and most generous celebs, especially when it comes to her fans.

So, what does one of the biggest pop stars on the planet send to one of her biggest fans? A whole lot of cool stuff! According to Us, the awesome care package included "a cute hoodie with ears, a backpack, a DVD of Perry’s Prismatic tour, a DVD of her film Part of Me, an iPhone 6 case and a black kitty cat purse." What I was most impressed about was that Perry sent this gift to Terry privately, without any social media attention around it, and the sweet gesture really proved the genuine support and love Perry has for children and her fans.

The sweet card from the "Firework" singer read:

Safyre, I heard about your Christmas wish and and am so honored that you saved the top of the tree for me! I hope you have a wonderful Christmas and a great New Year. I’ll be thinking of you on Christmas Day, special girl.

Oh, gosh. My emotions! The photos on Us also show Safyre posing by a keyboard, as she was learning to play "Roar," one of Perry's most inspiring and anthemic singles to date. The photographer Evan Lauber shared, "Safyre went back and forth between learning 'Roar' and opening gifts. She really is very interested in learning her favorite song from her favorite artist!"

Awww. Along with writing some of the most powerful and inspiring pop songs of recent years, Perry has shown that she is using her status to show some love and generosity to everyone around her.

The 31-year-old is a UNICEF Goodwill Ambassador who has devoted her time to volunteering and supporting children in need around the world. Perry also has a soft spot for her fans and has opened up to them in a way that is unique to her. In 2010, she had special Teenage Dream pillows and blankets made for her fans who were camping out to watch her free concert in New York City. And in 2012, Perry popped up at a screening of her Part of Me film in London, and even served her fans popcorn herself.

I don't know about you, but her gesture to her young fan made me love Perry even more. We need more celebrities like her out there.