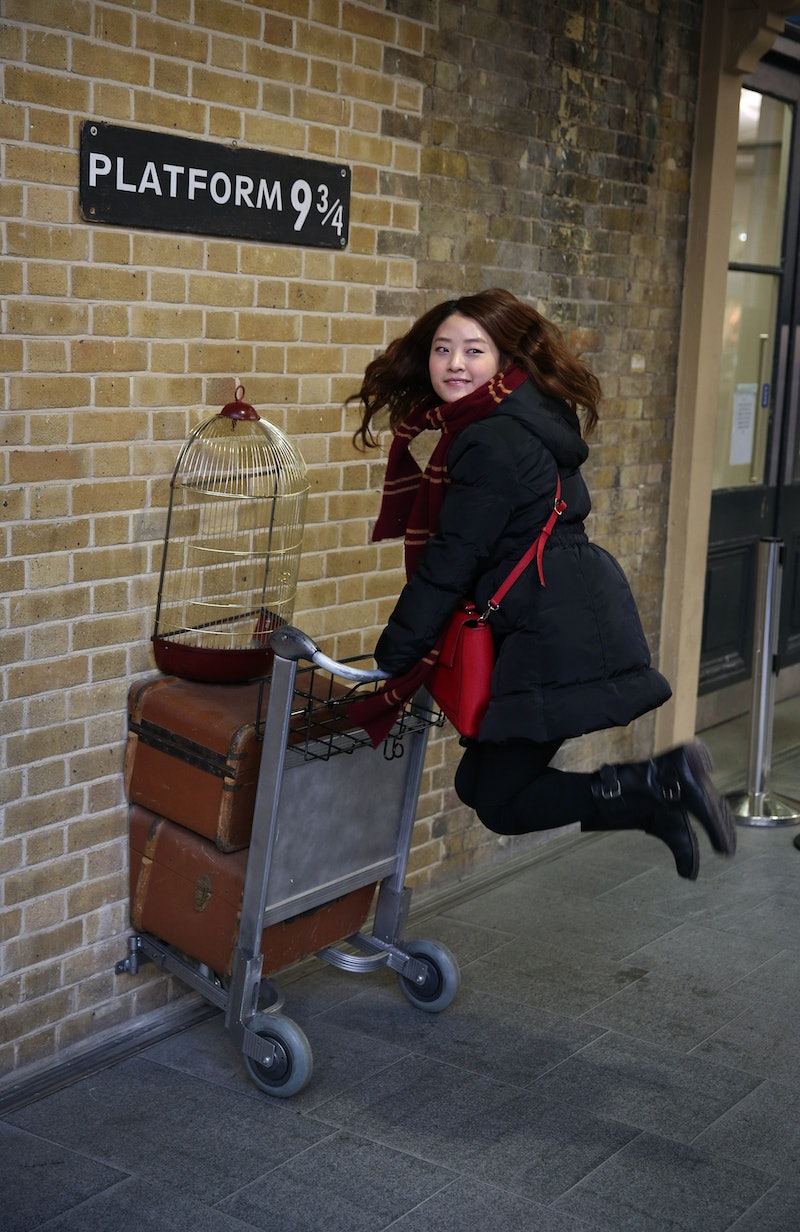 I grew up reading the Harry Potter series, and to this day those books remains some of my favorite of all time — not to mention they also taught me a lot of valuable lessons about friendship, bravery, empathy, and standing up for what's right. But the lessons of this series aren't just for kids; there are lots of lessons adults can learn from Harry Potter, too, and they are perhaps just as important. Basically, the wisdom of Harry Potter is boundless.

We all know that Harry Potter is amazing, no matter what age you are. The wizarding world is one of the most captivating, inspiring fantasy worlds I've ever read, and the stories are downright magical, for children and adults. In fact, even though the series was originally published for young readers, adults have been Harry Potter fans since the beginning. However, whenever we talk about the lessons the series has to offer, and the ways it can shape us as people, we typically only talk about the impact it has on kids who read the story growing up.

However, I would argue that J.K. Rowling's masterpiece of a series has lessons for all of us. And as a now grown-up Harry Potter fan who has read the books countless times, I can tell you that adult-me finds them just as meaningful as child-me did. In fact, if anything, growing up just gives me a whole new perspective on possible take-away messages from the books. Now that I'm no longer a kid, I pay more and more attention to the many amazing adult characters in the story — and I notice new things about the kids, too.

So here are 6 lessons that adults can learn from Harry Potter, too. Because this story was always for everyone, not just young people.

As a kid, I don't think I ever realized that there are a lot of adults in this series who have a hard time letting going of the past. You have, characters like Sirius Black, who is still trying to hold onto glory days that can never happen again, or Severus Snape, whose life in many ways revolves around relationships and mistakes from decades ago, or all the Death Eater families in eagerly awaiting the return of a master who by all accounts is gone. And the books make it clear that trying to hold onto the past like this isn't healthy or desirable (even if, I guess, the Death Eaters did get what they wanted for a little while).

The most admirable adult characters in the books are the ones who make their peace with the past, who carry it with them, but also move on. Whether its Remus Lupin who still makes a life for himself even after all his friends are dead or in prison, or Hagrid who still smarts over being kicked out of Hogwarts for crimes he didn't commit, but doesn't let that make him bitter, or Albus Dumbledore himself who learns from the mistakes of his youth and never forgets those lessons, even as an old man.

A lot of being an adult is in learning how to let go of the past and move forward with your life, and Harry Potter shows just how important that is.

2. It's How You Use Power That Matters Most

As a kid, I most identified with the young, relatively powerless Harry, Ron, and Hermione (and of course I still identify with Hermione today because duh), but as an adult you stop being quite so powerless anymore. Suddenly you have, at least in theory, money and status and some degree of influence. And as Harry Potter makes clear, how you use that power matters.

One of my favorite lines in the series comes in the fourth book when Sirius Black tells the kids, "If you want to know what a man’s like, take a good look at how he treats his inferiors, not his equals." It's a theme that runs through the whole series: How you treat those over whom you have power says a lot about you as a person.

And the worst characters in the series are those who abuse their power over others: Dolores Umbridge inflicting cruel punishments and arbitrary judgements against the students under her authority; Rita Skeeter writing hurtful stories to help her own career; and students who bully others just because they can. Even instances of otherwise good characters doing hurtful things to people who can't defend themselves are treated as wrong and reprehensible in the books, from Mad-Eye Moody turning Draco Malfoy into a ferret to Sirius Black's mistreatment of Kreacher.

As an adult, you have power in ways that children don't, and if there's one thing Harry Potter teaches you, it's how you use that power that matters most.

I don't think I fully appreciated this when I was younger, but there are some amazing mothers in these books — Molly Weasley springs to mind, naturally, but even characters like Narcissa Malfoy would do anything for their child. And not only that, but a mother's love is actually one of the most powerful forces in the whole of the wizarding world. It's Lily's love for her son that both saves him and defeats Voldemort when he comes for the Potters.

Not everyone has a mother like that, of course (and if yours was more along the lines of Mrs. Black I'm very sorry), but if you were lucky enough to have a mother that would do anything for you, you should appreciate it. Just because you're an adult now isn't an excuse to not call your mom.

Being an adult has at least one advantage over being a child: You get to vote now! You're allowed to be an active participant in the political system. And while there are lots of people who don't seem to think that politics are important or have much impact on our lives, I've read entirely too much Harry Potter to think that's true.

It matters whether or not your political leaders face up to inconvenient realities (like say the return of Lord Voldemort) or if they engage in smear campaigns against their opponents (like Cornelius Fudge does in Order of the Phoenix). It matters whether all people have rights under the law, or whether some people (like the werewolves, centaurs, giants, goblins, and house elves) are treated as second-class citizens. It matters if people get fair trials or are thrown in prison for crimes they didn't commit. It matters if the government is sacrificing the quality of students' education for the sake of a political agenda. And while we're on the subject, it matters whether a school is allowed to put three-headed dogs in corridors students can easily break into.

Politics matter. Politics affect you. And as an adult you have a duty to be politically informed and engaged.

5. It Isn't Where You Come From; It's Who You Become

As Dumbledore tries to tell Cornelius Fudge at the end of Goblet of Fire, "It matters not what someone is born, but what they grow to be." As a kid that statement sounds a lot like limitless potential, but to me as an adult it sounds a lot like the potential to reinvent yourself. You are not your past. You are not the labels people have ascribed to you throughout your life. You make your own future.

So if, say, you want to drop out of school and become a successful small business owner doing what you love a la Fred and George, who's to say you can't? If you want to turn down a possible career as a professional Quidditch player to pursue your passion to work with dragons like Charley Weasley, do it! If you're perpetually out of work because you're a werewolf, but someone offers you a teaching job, don't second guess yourself, rise to the challenge. If you've been raised in a pure blood household your whole life and taught to look down on everyone else, reject that attitude and fight Lord Voledemort instead. If the people look down on your for being muggle-born, blow them all away anyway.

Basically, no matter how old you are, it's never too late to become a new version of yourself.

I think when you're young you see adults through the lens of these, like, super serious humans doing super-serious things all the time, and as a kid, I think that's how I saw the adults in Harry Potter, too. But rereading the books as an adult myself, I see that there's a lot more to it than that. Even the most severe-seeming adults like Professor McGonagall will do things like put a first year on the Quidditch team instead of suspending him just because she cares that much about the House Cup.

Adults sometimes show a serious face around children, but in real life, adults can love their hobbies and their passions like Arthur Weasley and Hagrid. Adults can have a good time hanging out with their friends, like Sirius and Lupin. Adults can freak out over celebrities, like when Molly Weasley met Gilderoy Lockhart, or fall in love like Hagrid and Madame Maxime, or screw up their entire lives like Ludovic Bagman. Adults are all kinds of people, just like children.

And, as it happens, they can also like books about magical boarding schools. So read Harry Potter to your heart's content — Madam Pince would probably approve.