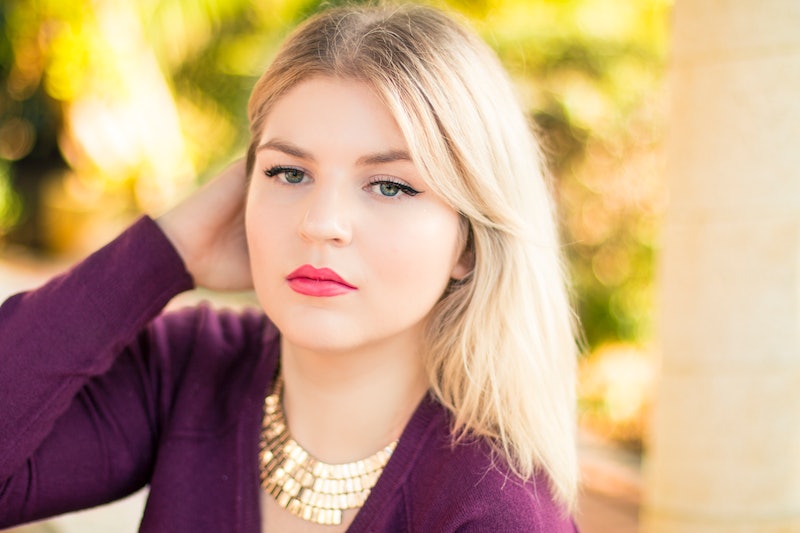 We talk about women's appearances way too much. But although we'd probably all benefit from cutting down on this kind of conversation in general, there's also a lot to be gained by keeping the angle positive when we do comment on others' looks. Women deal with tons of insults — and appearance-related "compliments" that are really insults — already, so the last thing we need is more negativity.

Sometimes, our commentary on others' appearances comes out totally different from what we meant. Other times, we really do mean something insulting — we just haven't really examined those beliefs. For example, we may really think we're doing someone a favor by saying they look good for their age... until we realize that this statement implies their age is inherently unattractive.

Due to enormous pressure from the media to be the perfect sexual object and the contradictory, impossible standards for what that means, most women unfortunately dislike something about their looks. A survey by Glamour found that 97 percent of women had at least one body-hating thought per day, and the average woman had 13 such thoughts daily. So, through no fault of their own, women can be sensitive to appearance-related comments, even if they sound innocuous.

When it comes to compliments about someone's looks, "you look great" and "you're gorgeous" are pretty fail-proof. Or, better yet, compliment something else. It's nice to be reminded you're more than an object and have focus removed from the aspect yourself that often receives the most focus.

Here are some comments people make toward women in an attempt to be helpful that could still harm their self-esteem — whether or not you mean them to.

The speaker of this "compliment" is usually trying to convey two separate thoughts: 1. You look good, and 2. you are more done-up than usual and therefore look different. However, it can come off as "You look great because you look different," implying that someone does not look good regularly on a day-to-day basis. Telling someone they look good because they don't look like themselves is definitely not a compliment.

If someone looks good despite their age, that means they don't look as good as they would if they were younger. Plenty of older people look good period, even when compared to younger people. When we behave like someone is the exception for being attractive and older, we contribute to ageist stereotypes of unattractive old people. Equating beauty with youth perpetuates a superficial definition of beauty. Also, it's ageist, and that's not cool.

There are a lot of problems with the phrase "out of your league." First of all, it implies that couplings are based on some sort of objective ranking of people, rather than subjective compatibility. Plus, there are often hints of classism in this imaginary ranking. The fact that you find someone more attractive than their significant other doesn't mean they do, and besides, your opinion doesn't matter anyway — it's their relationship, so their opinion is the only one that matters. You may be complimenting them, but you're insulting someone they love.

If what you're about to say starts with "you're hot for," stop right there. If you say someone is hot for a fat girl, you're implying that they're still not as hot as a thin girl would be. Similarly, saying someone is hot for their race means that their race is generally less attractive. You're insulting not only that person but also an entire group.

While you may say this to convey that someone looks good when they're primped up and when they just woke up, singling out their appearance after they've gone through a lot of effort implies that they must go through that effort every day to look their best. A lot of us don't have time for all that, or just don't like to do it — and either way, we shouldn't feel like we have to do it all, anyway. If we like it? Great. If we don't like it? Also great. We should be able to feel just as comfortable in sweatpants and no makeup as we do in fancy outfits and a bold lip — no matter how we roll.

Please just don't with this. First of all, losing weight is not always a good thing. Whatever is going on there is between the person and their doctor. Secondly, what if someone gains that weight back? They will then know you consider them less attractive that way. Thirdly, you don't know how they lost the weight; they might be struggling with disordered eating or going through a difficult time. Like "You look so good I didn't recognize you," this comment is often meant to convey two separate thoughts, but really, only the first part is necessary. There's no need to qualify it with weight — "You look great" is enough.

Whether you're referring to a haircut, surgery, acne removal, muscle mass, or any other changeable condition, insulting someone's past self is still insulting them. After all, it's not pleasant to think someone considered a past quality of yours unattractive. If someone altered a feature because they are insecure about it, you are drawing attention to that feature by saying it has improved. And if someone made changes for reasons unrelated to insecurity, you are making them feel like they should have been insecure. It's a lose-lose.

We can't all smile all the time. Women already feel too much pressure to smile to be positive and attract people. It only piles on the pressure when we're told we look particularly good when we're cheerful. All our emotions are valid, and our honest expressions of them should be welcomed and appreciated. We should encourage people to express their full range of emotion, regardless of how they look when they do it.