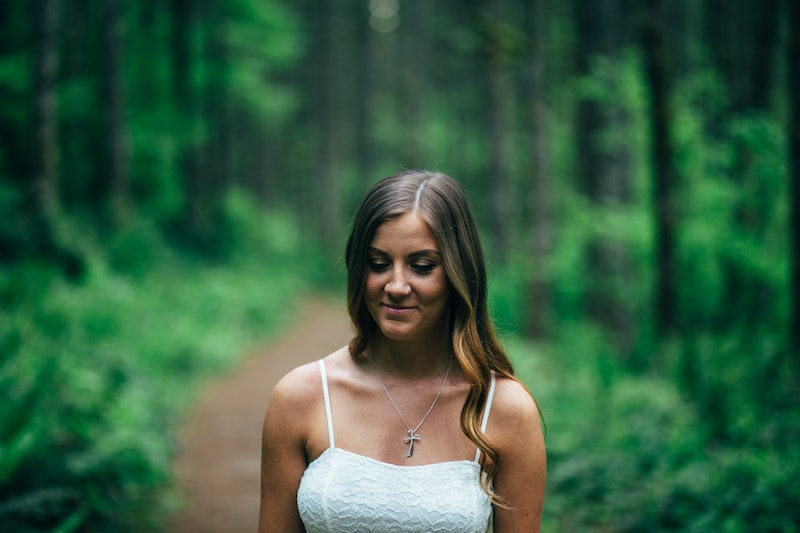 I've long been an advice junkie, sneaking self-help and pop psychology books under the covers after bedtime as a kid. (I was not your average kid.) Having dealt with self-esteem and body image issues, I've been an especially voracious consumer of advice — including some bad advice — on self-love and self-acceptance. After years of reflection (because I was not the type of kid or adult to believe what self-help books told me without question), I realized there was some advice I wanted to implement in my life, some I wanted to amend, and some I'd rather discard altogether.

There are lots of cliches we hear repeatedly throughout our lives and repeat to others without really thinking about what they mean. When we do, we sometimes realize the words are imprecise or misused. For example, when people say "everything happens for a reason," they're often really just saying you should try to make the best out of every situation, which is different from imagining a metaphysical motive behind everything. I enjoy picking these mantras apart because it helps me gain a more thorough understanding of what I really believe.

Here are some self-love mantras I've stopped repeating to myself because I've found they can actually contain some misleading or toxic messages, and what I tell myself instead.

1. "You Have To Love Yourself Before Anyone Else Can Love You."

I get where this one is going. I really do. But the phrasing is so unfortunate.

What these words of wisdom are trying to get across, as far as I understand, is that self-hatred hinders your ability to love others, which can also make it more difficult for them to love you. "Love" in this case refers to an action, not a feeling. You can feel love for others when you don't love yourself, but you may have a hard time expressing it. You'll have trouble sharing in their joys because you'll feel jealous. You'll have a hard time consoling them during hard times because your sympathy will be tinged with schadenfreude.

This philosophy of self-love first also suggests that people are attracted to confidence, which is true as well. When you're comfortable and outgoing, you put others at ease, and they are more likely to befriend you, though I wouldn't necessarily equate that with love.

What's the problem, then? The problem is that "you have to love yourself before anyone can love you" means nobody will love you until you love yourself. And I think not loving yourself is a pretty normal thing. Let's not give women one more thing they have to do by pressuring them to love themselves despite messages everywhere to the contrary, and let's not scare them by saying nobody will love them otherwise.

The people who love us should feel that way even during those days, weeks, or months when we loathe ourselves. We should not have to be positive all or even some of the time to earn anyone's affections. In healthy relationships, we should be allowed to feel whatever we feel. If people only loved people who loved themselves, many more of us would go unloved.

"Real women have curves" always came off more to me like reinforcing a beauty standard than challenging one. "Curves" usually refer to breasts and a butt, which have long been considered conventionally attractive. The word doesn't typically refer to actual fat people, whose shapes may or may not be curvy.

Aside from that, as Bustle's Alysse Dalessandro recently remarked, "all women are real." Every type of woman is "real," because a woman's realness is not predicated on her ability to appeal to the male gaze. What "real women have curves/fat/flaws" is really saying is that attractive women have those qualities. Think about it. Nobody says "real women have pimples" or "real women have B.O." or "real women have armpit hair," even though those traits are just as common as curves.

When we talk about "real women," we need to ask ourselves: Who gets to decide what is real? In this case, it is stereotypical heterosexual men who get to decide (I say "stereotypical" because this is based on a cultural idea of what men want, not actual men, though the former influences the latter). We should be suspicious that the women who get to have fat on their bodies are the ones whose fat is distributed in a manner considered sexually appealing.

You are real because you feel you are real, and that's a pretty awesome, strange, miraculous thing. "I think, therefore I am" does not apply solely to men. Since women are so often the ones being perceived, we forget we all share this mysterious experience of perceiving the world. And that is enough to make you human.

A lot of us find it creepy when random street harassers tell us to smile so our faces can be more aesthetically pleasing to them — but if people tell us to smile for positivity's sake, that's different, right?

Well, after being told for years to smile for both reasons, I've come to the conclusion that they actually share some similar motives.

"Smiling looks good on you" illustrates the slippery slope between smiling for positivity's sake and smiling to please others. Positivity can be a way of pleasing others, especially for women. We are taught to be pleasant and gentle and unimposing, to accommodate others. In short, telling a woman to smile is telling her to be feminine.

But it's about more than gender. Telling people what facial expressions to have is also a way of telling them what emotions to feel, or at least what to express. Many people in our culture learn as children to repress "bad" emotions and only show "good" ones, which can lead to shame and difficulty confronting feelings that should be healthy.

After being raised to smile in order to facilitate friendships and win people over, I now instead try to be honest about how I'm feeling (in settings where I can, of course — certain business environments, for example, don't allow that). When we're honest with others, it's easier to be honest with ourselves. Authentically expressing my emotions helps me get in touch with them, and it also facilitates genuine relationships.

As I mentioned, people who really love you will not only love your smiling, positive side, and they certainly won't care how curvy you are. They will love every side of you. And you deserve that love even while you're still learning to bestow it on yourself.

More like this
The Best Time To Date After A Breakup, According To Experts
By Bustle Editors
Most Comfortable Underwear For Big Butts
By Audrey Williams
20 Things You Should Never Tolerate In A Relationship
By Rachel Sanoff and Kathleen Ferraro
12 Ways You're Sabotaging Your Love Life
By Teresa Newsome and Lexi Inks
Get Even More From Bustle — Sign Up For The Newsletter