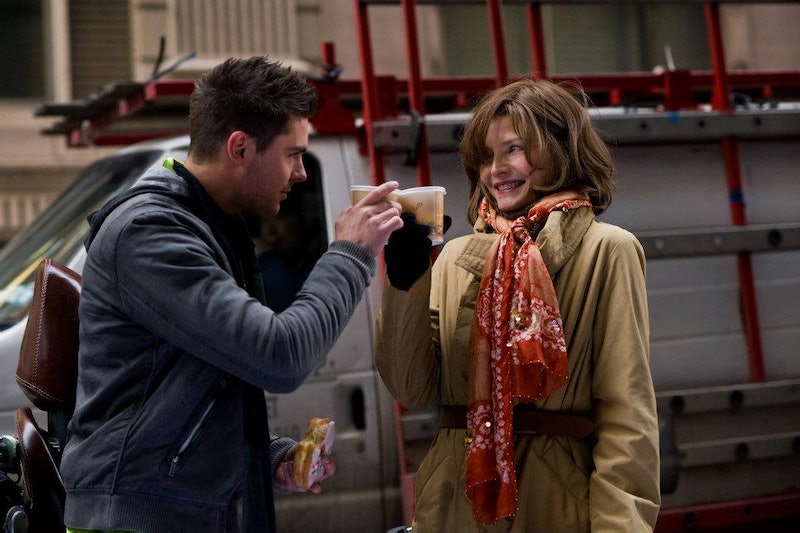 There's always a lot of pressure on New Year's Eve. Some people like to say that the way you spend New Year's Eve is how you will spend the entire year. And, while it can be fun to dress up and go out with your friends to ring in the New Year, let's be honest — it can also be horrible. Your heels get caught in your skirt, you spend hours waiting to get into a bar, and, if you're single, you get flooded by pity kisses at the end of the night. Plus, transportation is a nightmare and it's freezing. (Can you tell I'm not a fan of the New Year's Eve hype?) That's why there's a better alternative to celebrating New Year's: staying in and watching a New Year's Eve-themed movie.

This can be done alone or with friends, in actual clothing or in pajamas, and — this is the best part, my fellow anti-NYE peeps — before or after midnight. Yes, when you watch a movie on New Year's Eve, you don't actually have to stay up until Jan. 1. It's a beautiful thing. With that in mind, here are 13 New Year's movies you should watch this holiday season, whether you go out to celebrate New Year's or not.

Ever wondered what it would be like to have Ashton Kutcher, Halle Berry, Michelle Pfeiffer, Robert De Niro, Alyssa Milano and Seth Meyers in one movie? Then New Year's Eve is perfect for you. It's also good for anyone who wants to have a little bit of unapologetic fluff.

A New Year's classic, this iconic romantic comedy features one of the best New Year's Eve scenes of all time. It's also hilarious.

Another romantic NYE movie, perfect for a night in with your girlfriends.

Romance not your thing? Then buckle up for this disaster/action movie about an enormous cruise ship that tries to go up against an even greater ocean wave. (Hint: the ocean wins.)

Sex and the City: The Movie isn't really about New Year's, but the end of the year is as good an excuse as any to watch Carrie, Samantha, Charlotte and Miranda look fabulous for two hours.

Because one time Paul Rudd made out with Courtney Love in a bathroom. And why is this not a classic?!

The original Ocean's 11 heist took place on New Year's Eve instead of Fight Night. What better night to cause drama than the chaotic holiday?

Woody Allen's Radio Days isn't really a New Year's movie, but it does feature a great NYE scene. So, if you're into having some New Year's cheer without actually wanting to watch a movie about the stressful holiday, then Radio Days might be your best bet.

Need proof that crazy things happen on New Year's Eve? Boogie Nights will give it to you.

12. An Affair To Remember

One final classic romance to round out the list. An Affair To Remember shows how romantic, and tragic, a New Year's Eve kiss can be.

OK, so this one is absolutely not a New Year's movie, but it does have a certain NYE vibe to it. When you think about it, apocalypse movies aren't so different from New Year's Eve movies. They are both about a countdown to the end of an era, and both usually feature some kind of bonding between friends. This Is The End also happens to feature a massive, NYE-like party, and a superb end of days finale. It's pretty much an honorary NYE movie.

Whether you want to watch these movies to psych yourself up for New Year's or instead of going to that New Year's party your friends are trying to drag you to, these 13 flicks will remind you that the night never turns out the way you'd hoped, even in the movies.