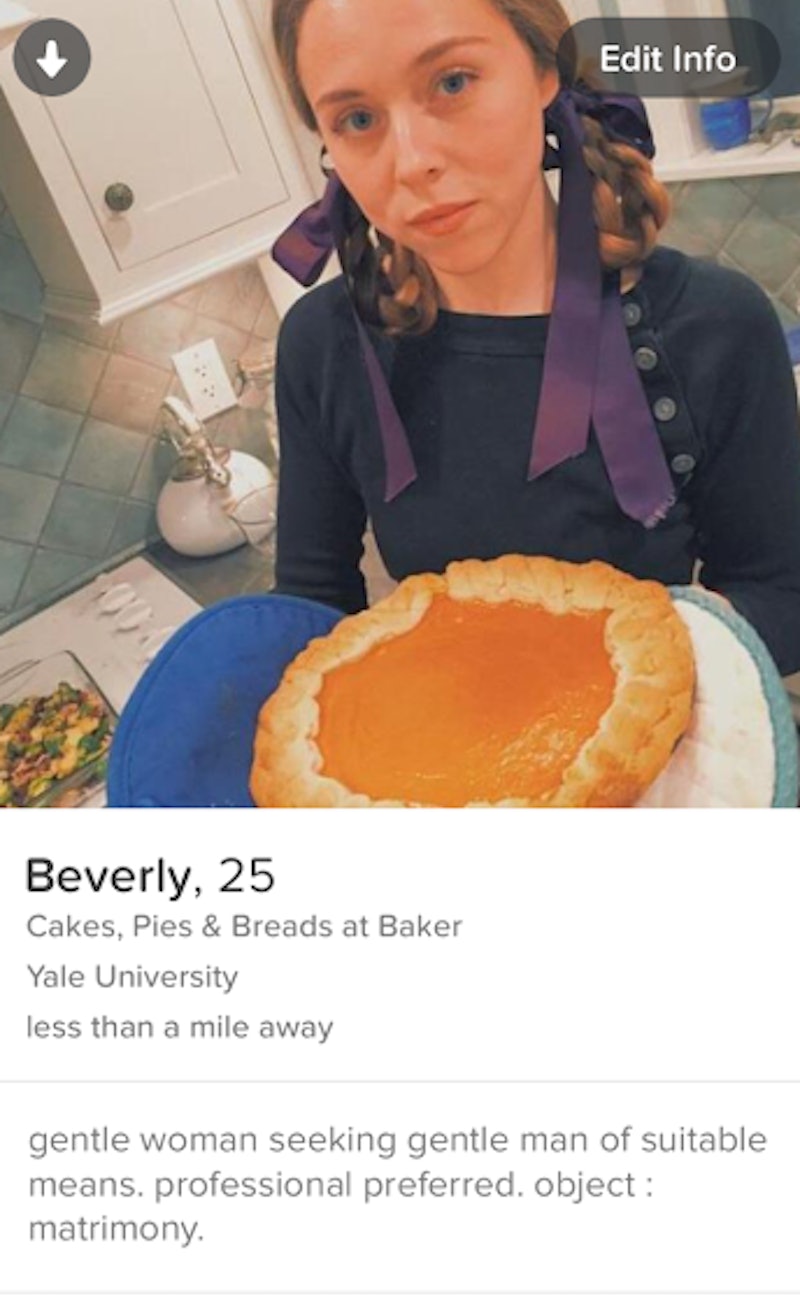 About a year ago, I had an "if you can't beat them, join them," moment in my dating life. I downloaded Tinder because I was lonely, recently heartbroken, and just another 20-something who was destined to have that white-rounded square with a red flame icon on their home screen. I got a few interesting matches here and there, but for the most part, I was totally disappointed with my experience. While the app calls itself a dating service, it's really more effectively geared towards nightcap partners and two-night stands and a lot of making and canceling of plans.

Everyone I met seemed to be surprised by the fact that I was looking for a relationship. Instead of bringing people together for committed relationships, Tinder just gave people a lift over the horizon to see more fish in the sea. And so for every awkward first date, there was a better option a swipe away. There's no reason to pick one when you can pick everyone. But what bothered me the most about Tinder was not that it was pushing our generation away from committed relationships — it was that it was encouraging our generation to do one thing and say another. And Tinder is certainly not alone in this. Almost every dating app and site born in the last three years has been geared towards helping people find relationships, but used to help people find warm bodies and someone new to talk about at brunch every week.

A few weeks ago, I came across a collection of 1950s etiquette books in a rare vintage book store. Having nowhere to be, I sat on a footstool and leafed through the antiquated guides for hours. Among the many things I found shocking, was the no-nonsense attitude towards dating. It was common in the early to mid 1900s for both men and women to put up personal ads in the local paper. Young women would sell themselves to men in two sentences or less: "Young woman, age 20, attractive, refined, regular income, object: matrimony." Back in the '50s women were encouraged to take nothing short of long-term commitment and respect for a man. There was no time or social standard for small talk and dates over watered-down cocktails for four weeks before moving onto another cocktail and another man. This business-like attitude towards dating really got me thinking.

What if women used the 1950s dating etiquette and applied it towards modern dating? What would happen if woman were upfront about their objectives? How would men react? What would the guys who fill out their profiles with anecdotes about not wanting to waste a ton of time talking before meeting think about a woman who insists on a serious and conservative courtship? Hell, what would a guy think about a girl insisting he speak with her father before they get serious?

There was only one thing to do: join Tinder as Beverly Jones, my 25-year-old alter ego who lives by 1950s dating mentality and cuts straight to the chase. Here's what I learned:

A lot of the people I matched with were both intrigued and terrified by my upfront attitude regarding my objective. When I told people I was on Tinder looking for long-term commitment, I was met with more "lols" than "me too"s.

Most Men Are Not Looking For Anything Serious

*Rich is dressed in bondage in his profile picture. But Beverly Jones wouldn't know this!

When you're navigating these sites as a heterosexual woman, you notice that most men don't believe the fact that they're using a dating site means that they're advertising themselves as someone looking for dating. They tend to believe that woman should just understand the nature of these sites and not be disappointed when they say that they're actually just in town from Australia for the weekend and looking for some American booty.

Not All Men Are Terrified Of Marriage

I was surprised by the amount of men who were looking for a special someONE. Within two days, Beverly had over 100 matches and close to 100 messages. Men were interested in her straightforwardness. They wanted to know more about her. More men than I had anticipated were happy to speak with someone with clear objectives.

Some Men Will Make The Call

While the modern man typically is not on an exclusive hunt for a woman with a major in baking and a minor in chores, he still seems to be attracted to the level of care a woman like that can give. Then again, there's no quicker way to anyone's heart than pie. I think that's a quote from the Bible or something.

In conclusion, while we've evolved socially far beyond the days of a tweet-length newspaper call for marriage, being straightforward and direct with your objectives is never a bad thing. It's better to know up front if you're dealing with someone who's going to be swiping for the next date under the table or if you're dealing with someone who could be your partner. With that said — regardless of your intentions, good luck with all your Tindering adventures in 2016.

More like this
18 Hinge Prompt Answers To Try If You’re Looking For Something Casual
By Lexi Inks
12 Active Date Ideas That'll Get You & Your Boo Outside
By Lexi Inks
The 3 Zodiac Signs Most Likely To Get Married Later In Life
By Kristine Fellizar
4 Zodiac Signs That Will Take Forever To Admit They Like You
By Kristine Fellizar
Get Even More From Bustle — Sign Up For The Newsletter
From hair trends to relationship advice, our daily newsletter has everything you need to sound like a person who’s on TikTok, even if you aren’t.