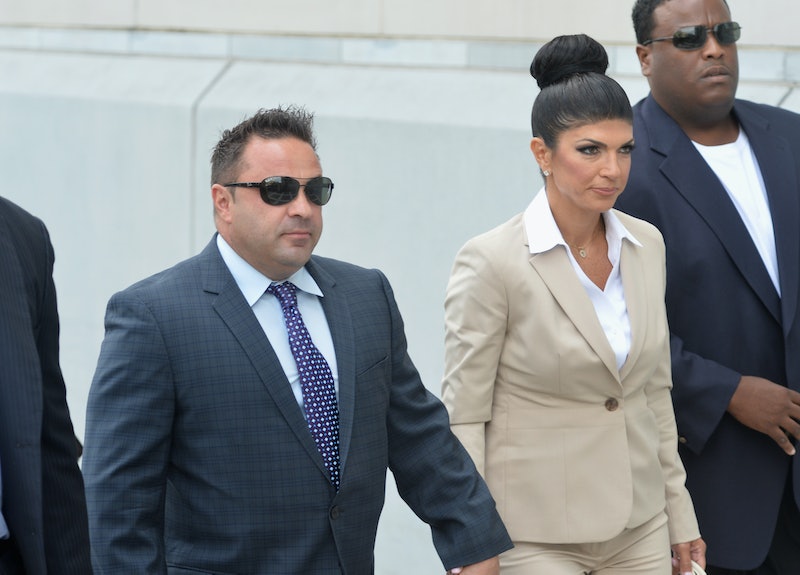 On Wednesday, Dec. 23, Real Housewives of New Jersey star Teresa Giudice was released from prison after serving almost 12 months for fraud. As happy as Teresa is to be home with her husband and her four daughters that means Joe Giudice will soon head to prison himself, where he will serve 41 months for his own fraud charges. That said, when will Joe Giudice be released from prison?

Joe is slated to head to prison in March 2016, and is set to serve three years and five months. Not only was Joe charged with five counts of fraud (Teresa was charged with four), in October 2015, after Joe received his 41-month sentence, he was also ordered to pay $414,588.90 in restitution fees to Wells Fargo, in addition to another $10,000 to the government. During his federal court hearing, Joe said before the judge, "I stand here humiliated before the court and my family and society. I disgraced many people, including my wife and four daughters. I take full responsibility for my actions. I promise to be a better person."

While speaking with Today in October, Joe admitted that he believed he would serve time in place of Teresa, but that didn't happen. "I took full responsibility for everything, but they still put her away," he said. "I mean, I was supposed to go away, not her. And that was part of the plea. What I thought, anyway. I don't know what happened in the courtroom that day."

So, why did Joe receive more time than Teresa? Not only did Joe take the majority of the blame, but they hoped by agreeing to a plea deal that Teresa would get some type of lesser sentence and/or probation. According to Joe's attorney, Miles Feinstein, who spoke with Us Weekly in October 2014, "We're hoping Teresa does not go to jail," he said after the couple pled guilty. "The great likelihood is that Joe will get some jail time. There's no doubt about it. It's just a matter of how long."

All that said, that doesn't mean he will serve his full sentence. Take Teresa, who didn't serve the entire 15 months she was sentenced. She was released three months early and is serving out the rest of her time under home confinement until February 2016. According to Teresa's legal team who spoke with Us Weekly in January 2014, early release is always possible, especially if the inmate showcases good behavior."You do 85 percent of your term. So 85 percent for her is 12 and 3/4 months," her attorneys said. "Then, you are eligible on that date for halfway house or home confinement for other 6 months or 10 percent of her sentence."

If Joe earns an early release, well there's no telling when he will head back to his New Jersey-based home. However, let's look at this as if Joe will be in prison for his entire sentence. If Joe is in prison for 41 months, then his release date will be sometime in August 2019. Looking at that potential release date written out really puts his prison time into perspective. That's a long ways away, which means Joe won't be in the comfort of his own home and won't get to spend the quality time a father should with his children anytime soon.

As scary as that is, the sooner Joe begins serving his time, the sooner he can get home to be with Teresa, Gia, Milania, Gabriella, and Audriana.