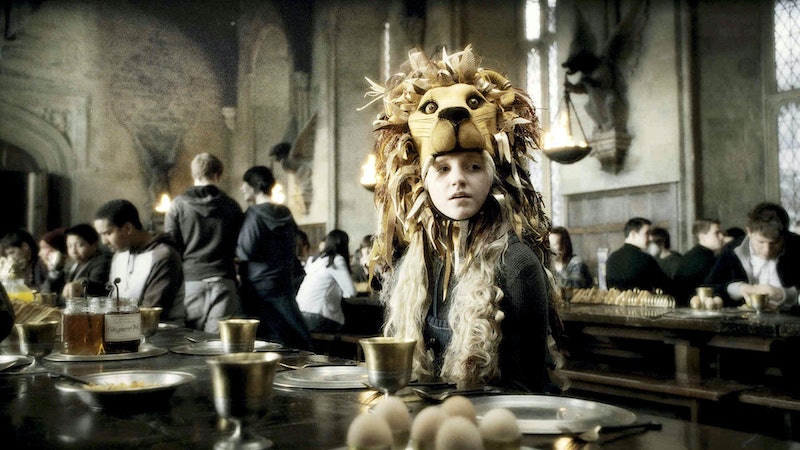 There comes a moment in every true Harry Potter fan’s life, when you realize that not everyone shares your intense love for the iconic series about a boy finding out that he’s a wizard. Obviously, a lot of people love the books, as they’re bestsellers that have been made into a highly successful film franchise — and a theme park to boot. Still, there are people who say casually, “yeah, I like Harry Potter.” And then there’s you.

You listen politely as people calmly discuss Harry Potter, stating that they’re familiar with the story and maybe tossing out their favorite quote. You sip your drink, trying to stifle the twitch in your eye when they get the line wrong. Then the conversation moves away from the topic, and you chatter politely until you can go home and put on your Gryffindor pajamas and re-watch the trailer for Fantastic Beasts and Where to Find Them for the millionth time.

The truth is, some people just don’t love Harry Potter as intensely as others. And that’s OK. Everyone has different favorite books, and as long as we’re all enjoying literature, I think that’s awesome. Still. Those people who call themselves “casual Harry Potter fans” may share an affinity for J.K. Rowling’s series, but they just don’t have the intensity of the fans of the more hardcore variety.

1. Hardcore Fans Have Read The Books... A LOT Of Times

Casual fans have read the series once or twice. Hardcore fans, on the other hand, have lost count of how many times they've actually read the series, and their books are basically disintegrating from overuse.

2. Casual Fans Don't Own Hard Copies Of The Books

The casual Harry Potter fan borrowed the series from the library, enjoyed it, and returned it when they were finished reading. Hardcore fans, on the other hand, have multiple copies. And they're always shopping for the perfect box set to add to their collection.

3. Casual Fans Didn't Dress Up For The Movie Premieres

When some of my friends who were very casually invested in HP went to the movie premieres with me, they wore jeans and a t-shirt. Then they considered sitting a seat away from me, as I was decked out in full AVPM-inspired Draco Malfoy apparel. After all, a hardcore Harry Potter fan never passes up a great costume opportunity.

Casual HP fans will see the trailer for Fantastic Beasts and Where to Find Them in October 2016 and think, "Hm, I should go see that! I'm looking forward to what J.K. Rowling will do next, since I enjoyed Harry Potter thoroughly." By this time, hardcore fans have been waiting for so long that they can't even handle it. Also, they've already crafted their costume for the premiere.

5. True Fans Visited HP World... Or Daydreamed About It

When hardcore HP fans heard that Universal was creating the Wizarding World of Harry Potter, they cried tears of joy and immediately smashed their piggy banks so they could take a trip to sip Butterbeer in the Three Broomsticks IRL. Whether they've gotten to go or not yet is irrelevant, because either way, the dream is there.

6. Casual Fans Don't Get Upset By Other Franchises Claiming To Be "The New Harry Potter"

Casual Harry Potter fans don't mind if someone says that a book was "just as good as Harry Potter." It doesn't bother them if someone enjoys a new franchise, saying that it's "the new best YA series." Hardcore fans, on the other hand, heard a person say that once, and after freaking out internally, gave that person a full-length lecture (with sources in MLA format) on why they were completely wrong.

Whereas casual fans might toss out a quote about Hogwarts now and then, maybe getting the wording wrong, true HP fans would NEVER misquote their fave series. In fact, they have their favorite quote from the books hanging in their room, framed.

Casual fans know who Emma Watson is, and they know that Neville won puberty. Hardcore fans follow the news about all the stars from the Harry Potter films as well, but they also follow the careers of those who portrayed smaller characters, as well. After all, they've got to support the students of Hogwarts.

"Oh, did J.K. Rowling write another book? Maybe I should read that one of these days." A hardcore Harry Potter fan did not say this quote.

The casual Harry Potter fan enjoyed the series, but they don't remember every single detail from the books. The hardcore fan, on the other hand, takes all the "hardest HP quiz ever" quizzes, and does not think they're difficult at all.

If you're a casual Harry Potter fan, you probably don't own any Hogwarts t-shirts or Gryffindor scarves. If you're a hardcore HP fan, you knit everyone a Weasley sweater for Christmas.

For the casual Harry Potter fan, the series just doesn't come up that often. Sure, you enjoyed reading it, but that was that. For the hardcore Harry Potter fan, though, it's difficult to go for a long time without making a HP reference. And if someone hasn't read the series, a lot of what you say sounds like an alien language to them.

13. True Fans Love All HP Fans, No Matter How Intense (Or Casual) They Are

After all, Hogwarts is special for all of us. But they might still call you a Muggle.