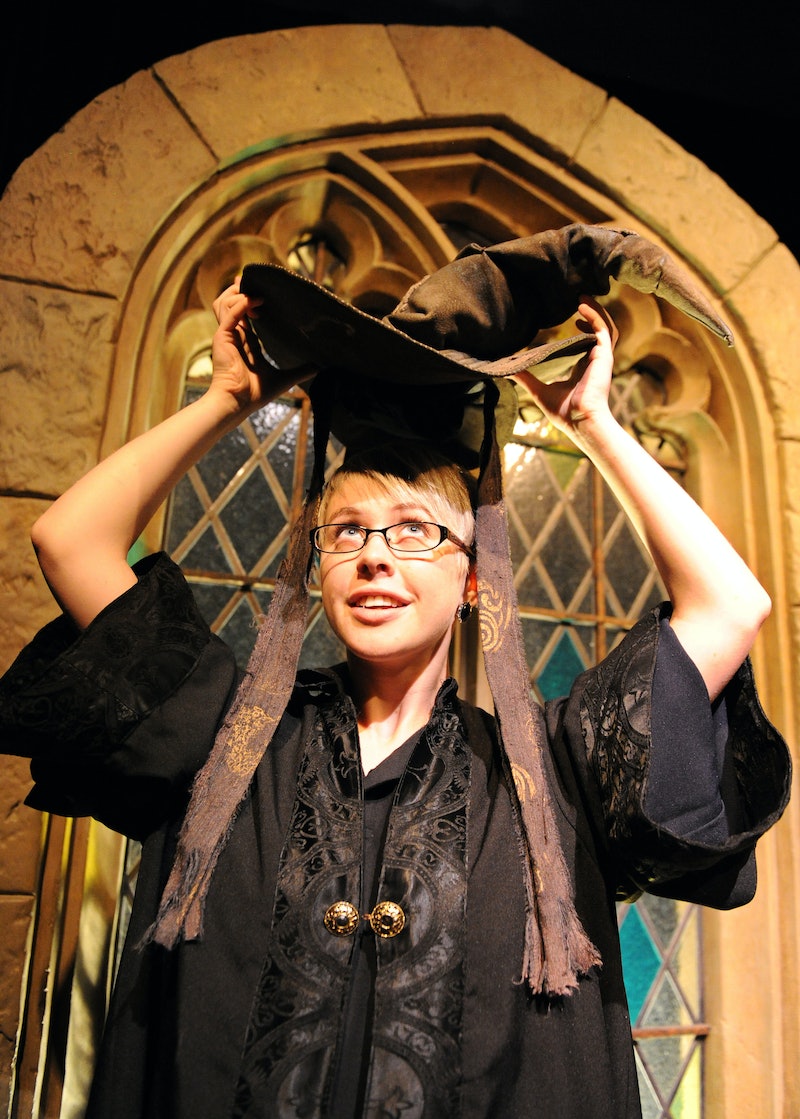 For book-lovers, nothing can compare to the joy of owning something from a fictional world. It's like you can put yourself inside the book world of your dreams and exist alongside your favorite characters. Consider it a light form of LARPing or acting out your fan-fiction. And when it comes to Harry Potter, there's enough wizardly items to buy for us Muggles to feel like we went to Hogwarts, too.

The first time I stepped into the Wizarding World of Harry Potter in Orlando, Florida, my first thought was: I must buy a wand. (Which I did.) You can never have enough chocolate frogs or butterbeer. And there's definitely not a limit on how many Hogwarts-themed scarves you can wear during the chilly winter months ahead. You have to show your house pride, after all. A journal, a quill, a wand, a Ravenclaw T-shirt — I completely encourage the collection of as much Harry Potter as your closet (and wallet) allows.

If you don't already own these 10 absolutely necessary (yes, necessary!) Harry Potter items, they're obvious must-adds to your holiday and birthday wish lists. And if you do already own most, show them loud and proud, fellow Potterhead. Now if only Hermione could come to life and be our BFF.

Everything With Your House Crest On It

You have at least one T-shirt with your house crest, or the Hogwarts crest, on it. You probably also have other items like sweatshirts, scarves, phone cases, and even shoes showing off the results of the sorting hat. How else are people going to know who is a Ravenclaw and who is a Hufflepuff? (Harry Potter T-Shirt, $22.62, Etsy, Lazyfruit)

Whether it's a golden snitch, Hermione's time-turner, or Rowena Ravenclaw's diadem, you have one or all of them displayed proudly on your jewelry stand. (Golden Snitch Bracelet, $13.64, Etsy, GeekyPopPrints )

You're never going to be able to do magic if you don't have a wand, right? You might not have a replica of Harry Potter's wand, but you definitely have your favorite witch or wizard's wand. I have Luna Lovegood's displayed at my desk and often wish I had more excuses to take it out of its case and show it off. (Harry Potter Wand, $37.50, Amazon, The Noble Collection )

You probably have at least one poster displaying the Deathly Hallows symbol or your most beloved quote from the series. And with so many to choose from, it's no surprise you want to hang more on your walls. Consider it an updated version of when you plastered The Backstreet Boys posters all over your childhood bedroom walls, with less grown-up shame. (Harry Potter Gift Pack, $23.97, Etsy, Motif4u )

How can you call yourself a true Harry Potter fan without the essential magical document of Hogwarts? This item is definitely one of the coolest HP things to own. (Maurader's Map, $16.97+, Etsy, GothikDelights )

You don't just have one, you have many. One with the phrase "Espresso Patronum" and another with a disappearing and reappearing Marauder's Map. (Deathly Hallows Mug, $13.32, Etsy, HomeDecorDrawing)

Because having a Harry Potter party isn't possible without them. (Harry Potter shot glasses, $22.20, Etsy, ZetaDesign)

It makes you feel better knowing that you have a Hogwarts acceptance letter, even if you had to pay for it or make it yourself. You can hang it above your eventual or actual college diploma on your wall. As someone who has purchased one — and even a personalized Harry Potter and Ginny Weasley wedding invitation — I totally get it. (Hogwarts Acceptance Letter, $12, Etsy, nikinut )

Writing with a quill is part of life for Hogwarts students (like we imagine we are). It's also a bit more difficult to do than the books and movies make it seem. (Harry Potter Pen, $26.94, Etsy, BookBathandBeyond )

Multiple Copies Of The Books

From the original copies you first started out with to the newest designs, and even the British copies — you've got them all. It doesn't matter how many bookshelves you have to buy.