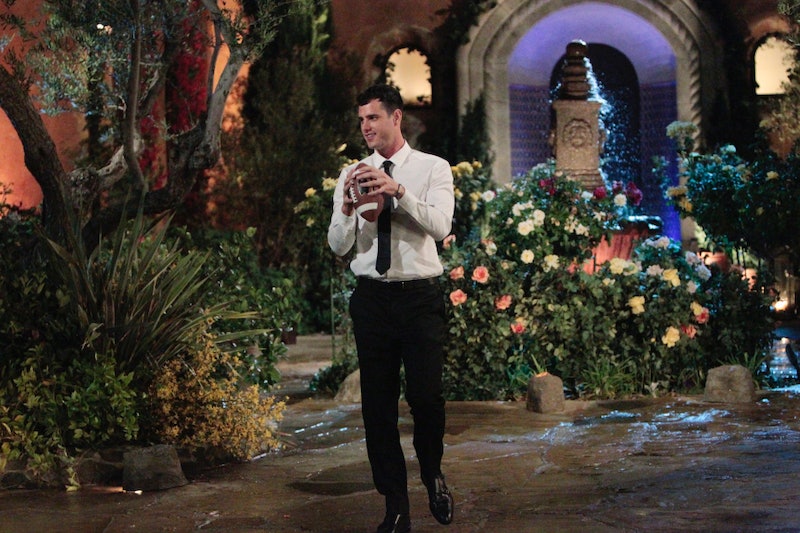 Some people ask me how I can still watch The Bachelor­. "Isn’t it boring? It’s the same thing over and over." Well, actually, it’s really not. The great thing about The Bachelor is that every season is markedly different than the last and the next. Each season has its own quirks and personality, depending on both the contestants and the man at the helm of the show. For instance, Juan Pablo Galavis’ season had a dark cloud over it because of his general attitude, and I think that new Bachelor Ben Higgins will be a little more sunny and bright. He’s a cheerful guy, and I think a lot of that has to do with both his outlook on the world and his dependence on his Christian faith. Yep — Ben is a religious Bachelor. So, how will this play out in his season?

First, a little background on Ben. He appeared on Kaitlyn Bristowe’s season of The Bachelorette, where he was eliminated third-to-last. According to his ABC profile, Ben is from Warsaw, Indiana, the only son of David and Amy Higgins and an avid basketball player and outdoorsman. He’s looking for the woman who could be his wife, and he’s doing it on live television.

That could honestly be the biography for most of the guys we’ve seen on The Bachelor — what I’m interested in is how Ben’s Christian faith will guide the choices he makes this season. Now, Ben is certainly not the first person on The Bachelor or The Bachelorette to paint himself or herself as religious. When former Bachelor Jake Pavelka, who is Methodist, appeared on the show in 2010, he asked his contestants questions about pre-marital sex and quoted scripture. Emily Maynard made sure to discuss faith with her fiancee before they got engaged. Sean Lowe is probably the most famous of the religious Bachelors, opting to wait until he married Catherine Giudici to have sex.

So, Ben is simply joining a long line of pretty religious Bachelors. According to OKHereIsTheSituation, Ben served as a director for a faith-based volunteer association in Cuzco, Peru while he was in college, and he worked as an intern at the Warsaw Community Church in his hometown. His tattoo (pictured below on his side) is also based in his faith — it’s a quote from Proverbs 16:3 that says, “Commit to the Lord whatever you do, and he will establish your plans.”

Seems to me that Ben is just a nice Christian boy looking for a nice girl to settle down with. But, what I don’t want for this season of The Bachelor, though, is for producers to go full-religion with their edit of Ben. Sure, he’s clean-cut, and sure, he’s a Christian, but Ben is also many things that don’t have to do with Christianity. Pigeonholing Ben into just the “Christian” Bachelor would ultimately do more harm than good for the show because it gives the storyline so few places to go. What if Ben does decide to have sex in the Fantasy Suite? Or kiss every girl on the show? Would that alienate very religious viewers? Ben is more than his faith, and hopefully we get to see all sides of his personality come Jan. 4.